The high-frequency index of people visiting “places of commerce,” designed to track the progress of the US consumer economy during the Pandemic, has inadvertently turned into a measure of just how hard Texas and other states in the south-western US were hit by the winter storm in mid-February.

The index by the American Enterprise Institute, released today, counts the number of people, based on cellphone GPS data, visiting “places of commerce,” such as offices, stores, malls, restaurants, hotels, movie theaters, airports, hospitals, other places of commerce and other points of interest in the 40 largest metro areas, and compares the number of visitors in the current week (Feb 15 – Feb 21) to the week ended January 15, 2020.

The index had been deteriorating in recent months into early January, with the individual indexes of the 40 metros dropping into a range between 71% and 38% of their foot traffic compared to January 2020. This was followed by some uptrends. And then came the historic winter storm that slashed visits to places of commerce in the affected areas. Austin, San Antonio, Nashville, Dallas, and Houston, which had been among the highest ranked cities in the index in recent months, plunged to the bottom of the list, with Austin’s visits to places of commerce in the week Feb 15 – Feb 21 at 34% of the level of January 2020. Other cities in winter-storm-hit states, such as Oklahoma City and Little Rock are not represented in the index (click on the chart to enlarge it): 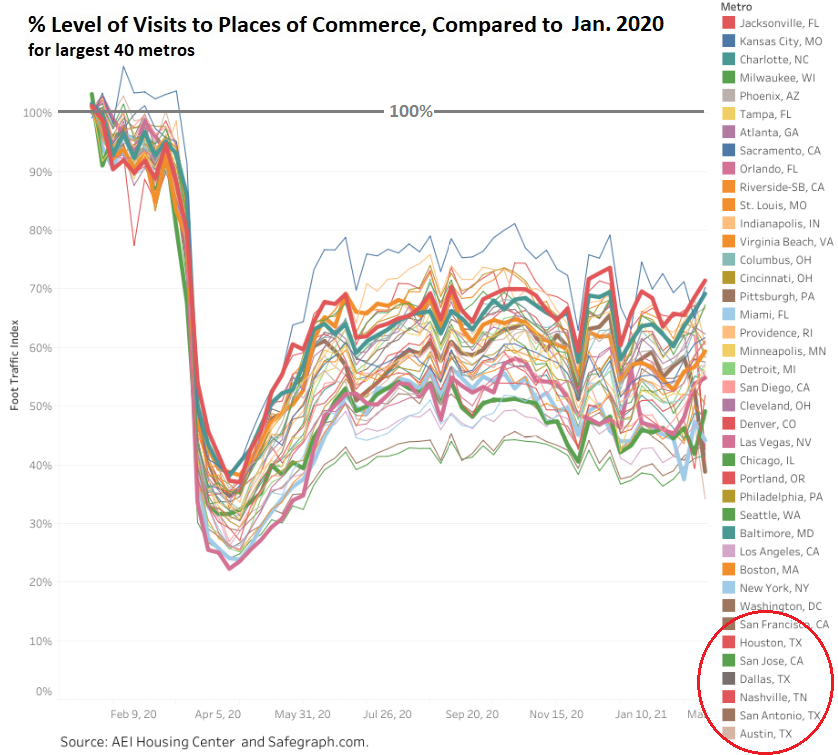 The infrequent winter storms in the southern part of the US essentially shut down cities a day or two until the storm settles down. During this time, people stay home. Businesses have trouble bringing in their employees because they can’t get there, etc. It’s normally not a big deal because it’s mild and short. And then the warm weather returns. But this storm was different: It was huge, harsh, and long and led to large-scale blackouts and heating failures that shut down commerce and transportation for days, and numerous serious disruptions continuing for several more days.

The storm hit many other aspects of these local economies that are not fully represented in the data here, including transportation of goods by truck and rail, ecommerce fulfillment and delivery operations, manufacturing, construction of all kinds, and oil & gas drilling and production. Partial data on these industries have already emerged.

Though the damage was huge, those types of hits to the economy are short-lived. They’re being followed by a surge in activity to repair the damage and get life back on track. And lawyers, it appears, are going to be extra busy.

Among the cities that weren’t hit by any winter storms that are near the bottom are San Jose (42%) and San Francisco (43%). Both of them have been seeing increased visits to places of commerce.

Work from home or work from anywhere appears to have stabilized in San Francisco and Silicon Valley, including San Jose. People are working, but they’re still not going to the office. A good number have moved to other parts of the Bay Area, or further afield in California, or have left California. San Francisco’s Financial District is still dead. Other central business districts are dead too.

Tourism is far from having recovered, and international tourism is still in collapse mode. This has hit the most touristy cities the hardest, such as San Francisco, New York City, Las Vegas, and Miami.

Going to shopping malls is a lost cause. Malls are in deep trouble, offering a way of shopping that has largely been obviated by ecommerce. This is a structural shift that has been going on for many years. The Pandemic merely sped up the process. Foot traffic to indoor shopping malls, anchored by department stores, will not recover to the already beaten-down pre-Pandemic levels.

Entertainment outside the home has gotten hit very hard, with many music venues, sports venues, theaters, and cinemas closed, others nearly empty. Many bars and restaurants are still restricted or are closed. People have spent tons of money to equip their homes for entertainment. But it’s not quite the same. Once it’s safe to do, people will surely try to get out of the house for entertainment, and those sectors will recover.

Movie theaters are the exception. The number of movie tickets sold has fallen since the peak in 2002, hammered by technology, including streaming and affordable big-screen TVs. Then the Pandemic reduced ticket sales to near-nothing. There will be a bounce off from near-nothing ticket sales. But the shift to home-viewing of movies that has been underway for years accelerated during the Pandemic, made increasingly attractive by technology. And movie theater chains will have to do some hard math.

97 comments for “How Hard Did the Winter Storm Slam the Economies in Texas, Other Areas? This Index, Designed to Track the Pandemic Recovery, Shows How Hard”