“L-shaped recovery” for mass transit. Per person, vehicle miles were already in long-term decline since 2003. Than came 2020.

Total motor vehicle travel on all roads and streets in the US – by private and commercial vehicles, including delivery vehicles, over-the-road trucks and rideshare vehicles – dropped by 13.2%, or by 430 billion vehicle miles driven, in the year 2020, by far the largest drop in the data going back to the 1990s, according to the Federal Highway Administration today: 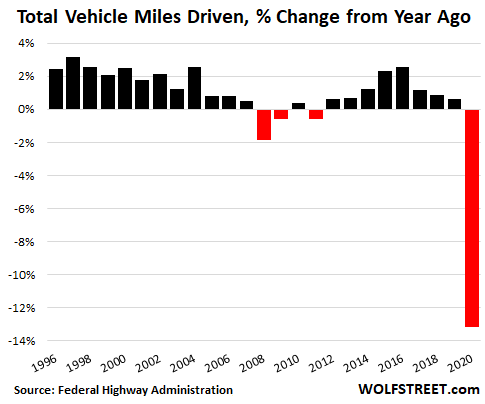 The enormous shifts of the Pandemic.

This plunge was caused by the shift to working from home and learning from home, and by the acceleration of shopping online instead of driving to the mall, and by the massive unemployment crisis that further reduced commuting, and by the restrictions to socializing and driving to restaurants and bars and concerts and ballgames.

Total motor vehicle travel on all roads and streets in December 2020 fell by 10.3% from December 2019, which brought the total for the year to 2,830 billion vehicle miles driven, the lowest since 2001.

And the drop in 2020 makes the declines during the Great Recession, which had caused so much hand-wringing at the time, look minuscule. From the peak at the time in 2007 through the trough in 2011, over these four years, total miles driven dropped by only 2.6%. 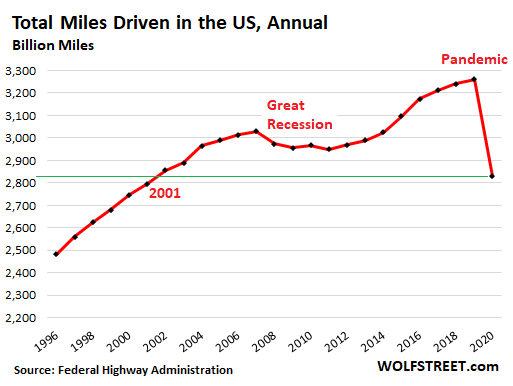 The Federal Highway Administration obtains this data from numerous traffic counting sites that are scattered around the states and reported by the states.

The “L-shaped recovery” of mass transit.

Many of the rail systems are still reporting declines in ridership of 80% or 90%. For example, the Bay Area Rapid Transit (BART) system, whose network connects the East Bay and parts of Silicon Valley to San Francisco, reported that in January 2021, ridership at 1.045 million passengers, was still down 88.8% year-over-year, without much improvement in sight since the original plunge in April, making it a near-perfect example of an L-shaped recovery. Americans have wholesale abandoned mass transit systems: 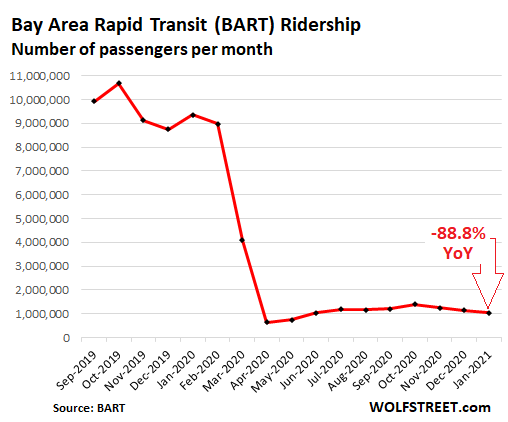 The biggest declines of miles driven occurred in urban areas as commutes got replaced by working from home or by not working at all. Note how little the situation has improved over the past six months: 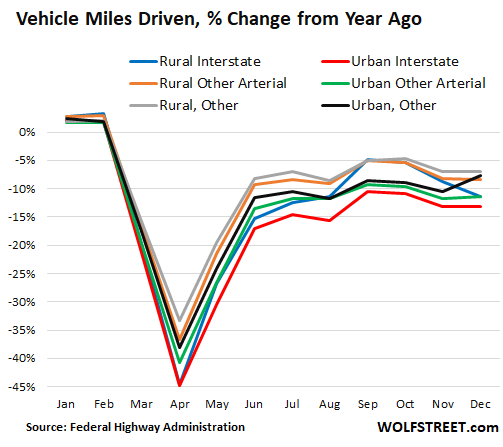 Total miles driven per person of driving age (people 16 years and older who are not institutionalized, such as in prisons, mental facilities, nursing homes, etc., per Census Bureau) had peaked in 2004 at 13,274 miles per year, and then went into a long decline, with a steep drop during the Great Recession that bottomed in 2012. After a shallow recovery came the Year of the Plague, when miles driven per person of driving age plunged to 10,870.

Note that this, in addition to personal vehicles, includes all commercial traffic, such as delivery vans, over the road trucks, and rideshare vehicles. 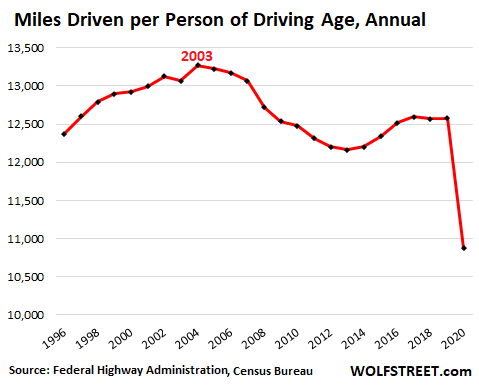 Over the decade or so before the Pandemic, there was a movement toward living in urban centers, along with a construction boom of apartment and condo towers in those urban centers. The idea was that these people, often younger people and empty nesters, would flock closer to where the action was, thereby eliminating often infernal commutes.

In addition, many companies, particularly tech companies, have had flexible work plans for years, where employees would work part of the time from home, and go to the office the rest of the time.

Increased use of car-pooling, given the expanded car-pool lanes and other benefits, might also have played a role in reducing vehicle miles driven per driving age person.

These trends would explain in part the long-term decline in per-capita vehicle miles since 2003. What came in 2020, however, provided some special effects.

Going forward, huge question marks hover over all the transportation assumptions that were taken for granted before the Pandemic, and that got scrambled during the Pandemic, including commutes by car that have been replaced by working from home; commutes by mass transit that have replaced by driving or by working from home, and the trend to city-center high-rise living that has now turned into the fabled Exodus.

What’s going on in the Wall Street Hype Machine regarding the EV space is hilarious, when you think about it for a moment. Read… Why the EV Battle Is Brutal for GM, Ford, Other Automakers: Tesla Cuts Prices Again, Barriers to Entry Vanish, EV Entrants Muck Up High-Profit Pickup Truck Oligopoly

87 comments for “More Shifts in the Year of the Plague: Driving Plunged even as Mass Transit Ridership Collapsed”