People and businesses have changed how they do things. And it shows up in the GPS data.

One of the high-frequency data sets that came out of the Pandemic, and that we have been following to track the progress of the US economy, is an index by the American Enterprise Institute that tracks, based on cellphone GPS data, the number of people visiting “places of commerce” in the current week compared to the number of visits in the pre-Pandemic week ended January 15, 2020.

These “places of commerce” include offices, stores, malls, restaurants, hotels, movie theaters, airports, hospitals, other places of commerce and other points of interest in the 40 largest metro areas. The “Foot Traffic Index” measures how many people arrived at these locations, regardless of how they got there – by car, on foot, or by whatever other means.

What is stunning is the lack of recovery since June, and the deterioration in recent months to where the indexes of the 40 metros have dropped into a range that is between 71% and 38% of their foot traffic in January 2020 – the range between the two parallel red lines – according to the AEI’s index for the week through February 7, 2021 (click on the chart to enlarge it): 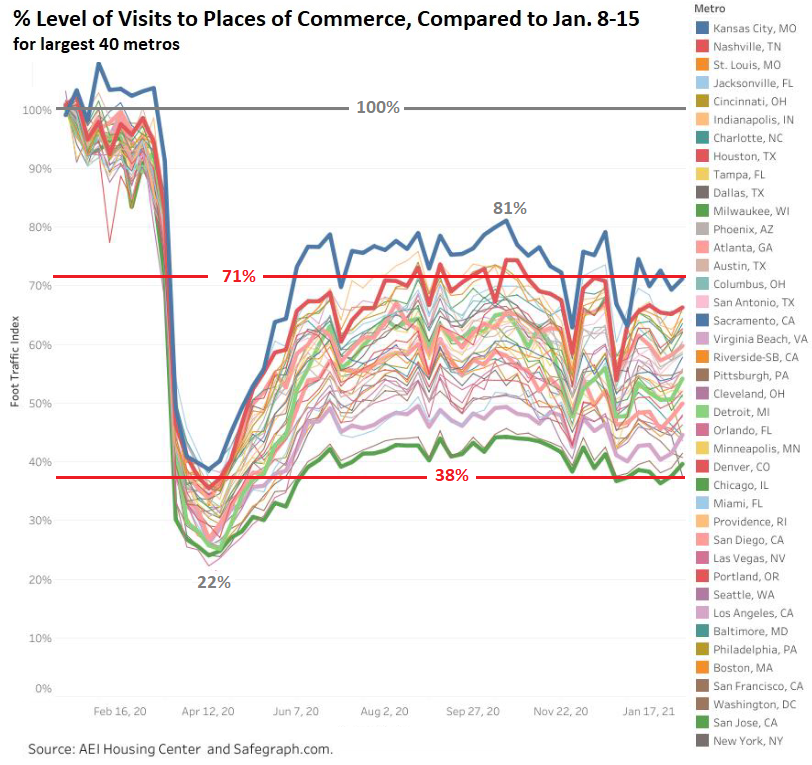 Some of the obvious reasons.

Tourism: In San Francisco (41%), international tourism has collapsed, and domestic tourism is down too, many hotels remain closed, and others are nearly empty.  New York City (at 38% of January 2020 foot traffic), Las Vegas (at 48%), Miami (at 51%) and some other cities with a big tourism industry are also impacted by the collapse of international tourism.

Shopping at malls is in a bad downward spiral. Ecommerce has taken over. Fewer people go to the malls.

But are there permanent shifts in foot traffic? The future “new normal?”

We already know that the economy has shifted in dramatic ways. Some parts of the economy, such as ecommerce and anything to do with the internet, such as streaming, and all the sectors that make it happen, including some aspects of tech and trucking, have boomed. The brick-and-mortar elements of ecommerce, such as fulfillment centers, have been on a hiring spree, as have delivery companies. And there are side effects, such as manufacturing delivery vans has become a priority. There are many more shifts like that.

Clearly, many people are eager to go out again and socialize and have someone serve them their food with a smile and go on vacation and hang out in crowded bars and go to ball games. And those activities will take off again once the Pandemic settles down. International and domestic mass-tourism will pick up again. Those types of activities will eventually return to some sort of normal level even if it takes a while.

But the shifts also appear to have caused permanent changes in the way people shop, with malls and department stores sinking even faster than before; and in the way people consume movies, with streaming now being pushed by the studios themselves even for new releases; and where people do their office jobs.

Where office jobs get done may be the biggest permanent change. For many employers, there is no work from home, including construction, manufacturing, warehousing, transportation, barbers, hair salons, restaurants, and a million other operations. But where office work gets done will never be the same again – especially with big companies that have the technology and resources to handle it.

Some office workers will eventually return to the office full time, but many others will be in a hybrid operation, working in the office part of the time, and working at home the rest of the time. Others are permanently working from anywhere. A slew of big companies have already revealed their permanent hybrid models, and sketched out their ideas about the future layouts of the office.

There are other activities that will look different post-Pandemic, including business trips. While some business trips will resume, others will be replaced by video conferencing, which has now proven itself as an efficient and manageable alternative for many types of meetings, and companies and people have gotten used to it over the past year. This reduces foot traffic to airports, hotels, restaurants, and the like.

So when I look at the chart above, what I see post-Pandemic after the economy has fully recovered is a level of foot traffic that is lower than it was in January 2020, because people shop less at brick-and-mortar stores, go to the office less often, go on business trips less often, go to movies less often, and do other things less often, even as other businesses, such as restaurants, bars, barber shops, nail and hair salons, etc. return to some sort of normal.

188 comments for “Visits to “Places of Commerce” Still in Collapse Mode. Have Some of these Massive Shifts Become Permanent?”