Amazon, UPS, and FedEx, in search of cost savings, partnered with startups that are now rolling out electric vans. Has Ford, the leader in vans, dropped the ball?

The biggest no-brainer in the history of mankind, or at least in the history of electric vehicles going back to the 1800s, is finally taking off in a massive way, after attracting billions of dollars of investments: The humdrum business of manufacturing lowly delivery vans, more specifically electric delivery vans for stop-and-go urban delivery routes in the age of ecommerce.

All the big automakers and a slew of startups have jumped on it. Delivery companies, such as Amazon, FedEx, and UPS, seeing the savings in operating costs provided by those vans, are clamoring for them. Amazon, for which delivery costs are a huge item, has been the most aggressive. And Amazon, UPS, and FedEx are doing it in competition with legacy automakers — which came as a wake-up call for the automakers.

Any electric van sale comes at the expense of a gasoline or diesel-powered van. It’s a zero-sum game. This is true for all EVs. They’re still vehicles, just with a different power train, and they compete with internal combustion engine (ICE) vehicles in the same market. Any sale of an EV is a lost sale of an ICE vehicle. Legacy automakers have finally started to pay attention.

Electric vans have some unique advantages. The average delivery route is 74 miles per day – with some routes being longer and others shorter – according to Ford’s Telematics data, as these vans spend a lot of time idling while packages get unloaded and dropped off at points along the way. At night, these vans sit at the depot.

So, for electric delivery vans, “range anxiety” is not a problem, and charging is done at night at the depot. Maintenance is far lower than with diesel or gasoline-powered vehicles. All modern EVs use regenerative braking, where the motors are used to brake. In the process, they charge up the battery. And at stops, electric motors don’t idle. This makes electric vans very efficient on stop-and-go delivery routes.

GM estimates that its BrightDrop electric van will save $7,000 a year in operating costs compared to a “diesel alternative” (“Estimated based on assumptions for fuel costs, miles traveled, maintenance and cargo load. May vary based on use case,” it says).

While UPS and FedEx and others have been testing electric vans for years, on a relatively small scale, the industry is now ramping up. The battery technology is the tricky part, but the rest of the EV is far simpler and easier to build than an ICE vehicle. And given that delivery routes are relatively short, batteries are less of an issue, and less of an expense, in vans than in vehicles for personal transportation or long-haul trucks.

GM announced that it would start producing the first of its BrightDrop EV600 electric vans late this year at its CAMI manufacturing plant in Ingersoll, Ontario. The first 500 vans will be sold to FedEx.

The EV600 is designed similar to other EV platforms: all-wheel drive with small-ish motors in the front and in the back between each set of wheels, with a big battery pack in the middle (image via GM’s BrightDrop):

These platforms are flexible, and can be stretched, and more powerful motors, or more motors, can be added, which will lead to commoditization of the components and cost efficiencies, and open the door to new entrants into the vehicle market to compete with legacy automakers, which is precisely what is happening.

In September 2019, Amazon, whose delivery costs are huge and controlling them is a priority, announced it would purchase 100,000 electric vans from a startup company, Rivian, which has raised about $8 billion since then, including $2 billion from Amazon and $500 million from Ford.

The Amazon vans, which come in three different sizes, are based on Rivian’s Skateboard platform, that allows for all-wheel drive with small motors between the wheels and the battery pack in the middle. Some Amazon vans may also be front-wheel drive only, minus the motor in the rear (image via Rivian):

“Amazon is working with Rivian to conduct additional testing of the vehicle’s performance, safety durability in various climates and geographies, as engineers continue to refine the vehicles for the start of production slated for the end of this year,” it said.

“Amazon has also started getting its buildings ready to accommodate the new fleet of vehicles and has installed thousands of electric vehicles charging stations at its delivery stations across North America and Europe,” it said (image via Amazon): 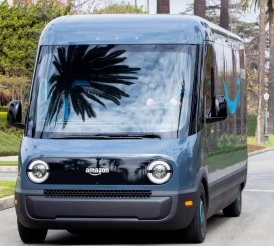 In August, Amazon also ordered over 1,800 electric vans from Mercedes-Benz. Amazon already operates thousands of electric vans around the world and said that in North America and Europe, in 2020, these electric vans delivered 20 million packages, and that it “is redesigning its delivery stations to service electric vehicles – ranging from the electrical design to the physical layout.”

FedEx has been testing electric vehicles for a decade. In November 2018, it announced that it would add to its fleet 1,000 electric vans by Chanje Energy, a California-based company, buying 100 of the vans and leasing the remaining 900 from Ryder System. For FedEx, these are small numbers, but they will allow the company to test the vans thoroughly before becoming reliant on them. And if those vans work out for FedEx, they will be more competition for GM and Ford.

UPS has also for years been testing electric delivery vehicles and is converting some of its older diesel vans to electric drives. But it made headlines last April when it gave an “initial order” of 10,000 electric vans to Arrival, a startup in the UK with which UPS has partnered since 2016. “UPS and Arrival have co-developed the vehicles,” Arrival said, to “exactly match UPS’s specifications.”

Arrival said that its new electric vans offer “50% operational cost savings for fleet owners.” The 10,000 vans will be “rolled out in the UK, Europe, and North America from 2020 to 2024.” UPS has the option to purchase another 10,000 vans during this period. In addition, UPS made an investment in Arrival of an “undisclosed amount.” 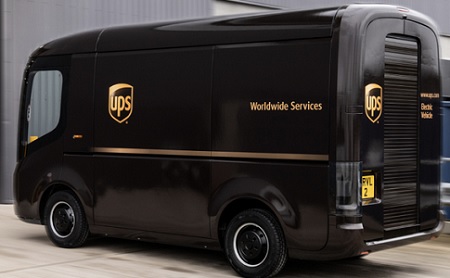 Ford, the US leader in ICE van sales, is getting its E-Transit van ready for sale in late 2021. Despite its investment in Rivian, Ford’s E-Transit will not be based on Rivian’s Skateboard. Unlike the other models discussed here, Ford’s van will not be based on a new platform at all, but will be an electric version of its existing ICE Transit Cargo Van.

Some of the advantages of EVs disappear when an existing ICE model is converted to electric drive. Maybe Ford got lost in its own Transit success or didn’t want to spend the resources to design a new platform and didn’t want to use Rivian’s platform, now that it has become a competitor. And it may have dropped the ball.

European automakers Volkswagen, Mercedes-Benz, and various brands now under the new roof of Stellantis are rolling out electric delivery vans based on their new platforms. Chinese automakers have been very active in building electric vans for use in China.

But the most fascinating part of this development is that huge delivery companies with immensely deep pockets — Amazon, UPS, and FedEx — are partnering with startups to create electric vans in competition with legacy automakers, and legacy automakers are now scrambling to not get run over. That competition is a good thing.