“It was more drama than any market could withstand as Manhattan sellers started slashing prices.”

The luxury housing market in Manhattan didn’t quite descent to the levels seen after the Lehman Brothers blowup, but close, and it totally wiped out the euphoria that had reigned from 2013 into 2015 when some of the most glorious mind-bending global-headline-grabbing deals were signed and touted. 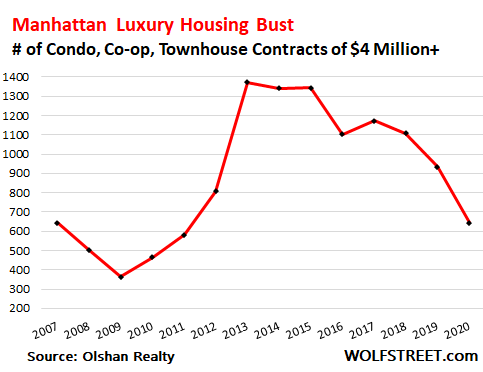 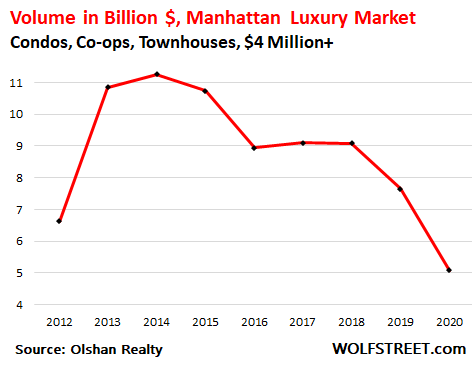 Developers trying to unload their luxury inventory have faced stiff headwinds for the third year in a row, with just 206 sales in the $4 million-plus category, down 26% from a year ago, after sales in this category had already plunged by 35% in 2019. The number of contracts signed in 2020 was down 57% from peak euphoria year 2014 (481 contracts signed).

“Not since the bleak days of Lehman Brothers crash in September 2008 and the subsequent fallout into March 2009 has the Manhattan luxury real estate market experienced such an unpredictable and disruptive impact as the Covid-19 pandemic,” wrote Donna Olshan in the Luxury Market Report 2020.

The underlying market dynamics are not pretty. The average number of days on the market before a sale occurred soared to 589 days, “mostly because developers were reluctant to discount inventory, often at their own peril,” says Olshan: 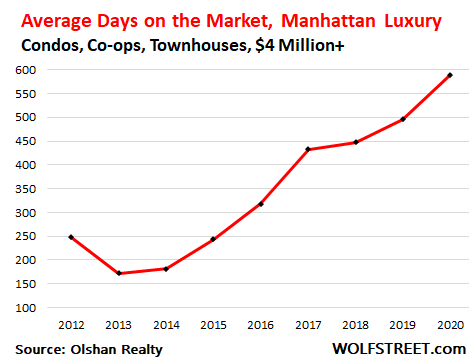 In order to get buyers interested, sellers cut prices on average by 12% from original asking price before a contract was signed, up from 10% last year, and up from 3% and 4% during the euphoria years 2013 and 2014, according to Olshan Realty’s data: 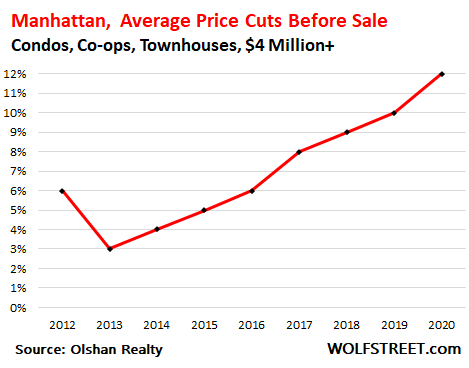 The report ascribes the accelerated downturn in Manhattan’s luxury real estate to these factors:

“It was more drama than any market could withstand as Manhattan sellers started slashing prices,” Olshan says.

But sharply lower prices and record low mortgage interest rates are bringing in buyers, and sellers are now willing to take huge losses to get rid of their condos that they’d bought at peak euphoria. And so, in the fourth quarter, volume rose above last year’s level. But Olshan cautions, “This is not to imply that the 4th quarter’s performance will extend into next year’s first quarter. After all, we live in unpredictable and disruptive times.”

The bloodletting in the Manhattan luxury market for sellers who’d bought during the euphoria and had paid epic prices for their condos is becoming legend, including earlier in December a $12-million loss on a condo on “Billionaire’s Row” that the seller had acquired in 2014, one among many big-money losers in the same condo tower. Read…  Manhattan Luxury Condos See Demand, But at Much Lower Prices with Big Losses for Sellers

172 comments for “What an Ugly Year for Manhattan Luxury Condos & Co-ops, But the Market Came Unglued in 2016”