Seller lost $12 million, or 35%, on a condo at One57, on Billionaires Row, adding to the list of big money losers in the condo tower.

File under Yes, but: “Manhattan Luxury Market Continues Fall Rally,” said Mansion Global this morning, based on sales volume of properties at a price of $4 million or higher. Olshan Realty, in its weekly luxury report published this morning, said that 21 contracts for luxury condos, co-ops, and townhouses were signed last week, bringing the total since the beginning of September to 227 contracts, exceeding last year’s 219 signings for the same period. Over the past two weeks, 12 homes went into contract with asking prices of $10 million or more, “the highest total over 2 straight weeks of trophy sales in the last 9 months.”  Yes, but prices….

The most expensive unit to go into contract last week was a 4,483-square-foot corner condo with three bedrooms and 4.5 bathrooms on the 58th floor of the 90-story One57, on 157 West 57th Street, or “Billionaires’ Row,” with the living room and dining room overlooking Central Park. After six years of owning it, the sellers took a loss of $12 million loss or 35% to get rid of it (image of the tower via One57): 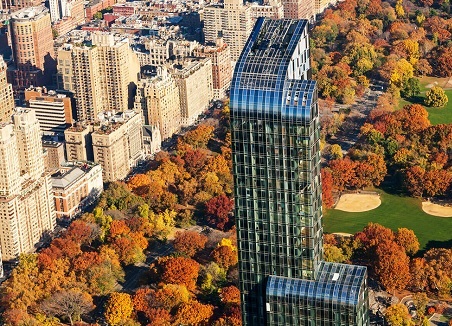 The seller had bought the condo in October 2014 for $34 million. At the time, One57 was the tallest residential tower in Manhattan, and the luxury craze was in full swing. The condo has been on the market since March, when it was listed at $24.8 million. Eventually, the asking price was cut to 22.5 million.

The brokers aren’t naming names, and neither the purchase price nor the identity of the buyers or sellers have been disclosed.

But on the assumption that the purchase price was below asking price, as has been typical in the current Manhattan market, the sellers would lose about $12 million on the deal, or about 35% of their initial purchase price.

But that $12-million loss is dwarfed by the $20-million loss taken by a seller of a 6,000-plus-square-foot condo on the 88th floor in the same building, reported in early June. The sale closed at $28 million. The seller, an entity affiliated with a New York-based subsidiary of HNA, the collapsed Chinese conglomerate that China’s government has taken over, had acquired the condo in 2015 for over $47 million during Manhattan’s foreign-buyer powered luxury condo craze. The sale amounted to a 40% loss on the purchase price.

In mid-March, in a deal made before the Pandemic, a condo on the 66th floor of the same building sold for $17.2 million. The seller had purchased the unit in 2014 for nearly $30 million, amounting to a loss of about $12 million or 42%. And there had been other big losses at the building.

The lower 18 floors of One57 are occupied by a Park Hyatt. According to StreetEasy, the New York City specialized real estate site owned by Zillow: of the condos on the remaining floors, 19 are currently listed for sale.

The two most expensive units listed for sale have asking prices of $49.8 million (87the floor) and $45 million (86th floor), each with over 6,000 square feet. As mentioned above, the HNA-affiliated seller of the same-size condo on the 88th floor was able to sell the unit for $28 million, generating a $20-million loss.

In addition, there are currently four units in contract at One57, including the one mentioned above on the 58th floor. One of those four units had been on the market off and on since 2016, with an asking price of $27.1 million. There is no data on purchase price.

In addition, StreetEasy lists 15 rental units at One57, with an average asking rent of $32,833 per month.

What these sales show is that there is demand if the price is low enough — despite the Pandemic. Price, if low enough, fixes a lot of market issues. According to the report by Olshan Realty, the average discount from the original asking price to the last asking price of the properties that went into contract last week was 9%, with an average asking price of $8.4 million. And these properties had on average been on the market for 500 days.

And the buyers of the 58th-floor condo were an empty-nest older couple in New York City, according to Olshan’s report, citing the buyers’ brokers – locals.

This is now happening in apartment towers in densely populated cities around the US: Suddenly mind-boggling vacancy rates as a large number of tenants have left. And this is happening even at the best of them. Read… Vacancy Rate at Iconic Manhattan Tower with 899 Apartments Hits 26%: This Shows How Fast & Massive the Exodus Has Been

60 comments for “Manhattan Luxury Condos See Demand, But at Much Lower Prices with Big Losses for Sellers”