Startup investors making hay while the sun shines. Public in blindly exuberant feeding frenzy. But the IPO ETF is down 3.0% today, on too much hot air?

Food-delivery outfit DoorDash sold 33 million shares to institutional investors yesterday for $102 each, raising $3.37 billion, for an initial market value of $38 billion. Shares [DASH] started trading mid-day today, went on to around $190, for an initial pop of 86%, giving it briefly a ridiculous market value of $70 billion, before backing off. In 2018, the company had a “valuation” of $1.4 billion.

But this was only the third-largest public listing this year, behind Bill Ackman’s $4 billion SPAC (special-purpose acquisition company), a blank-check outfit that will attempt to buy something later, and Snowflake’s $3.86 billion IPO.

DoorDash was only one of seven public offerings that started trading today, joining two other IPOs and four SPACs, this being a historic SPAC bubble:

And more offerings are being lined up before the well-deserved holidays, including another mega-deal: Airbnb, whose expected IPO offering price keeps getting raised amid red-hot exuberance for IPOs. The latest expectations of an offering price would value it at $42 billion, and would raise $3.3 billion. The offering is expected to price later today and start trading on Thursday.

The Renaissance IPO ETF [IPO], which attempts to track the Renaissance IPO Index, had roughly tracked the S&P 500 index over the past five years, and in early March had fallen enough to wipe out any gains since the end of 2015. But since March 18 through the close on Tuesday, the ETF has gained over 200%, completely blowing away the also roaring S&P 500 (data via YCharts): 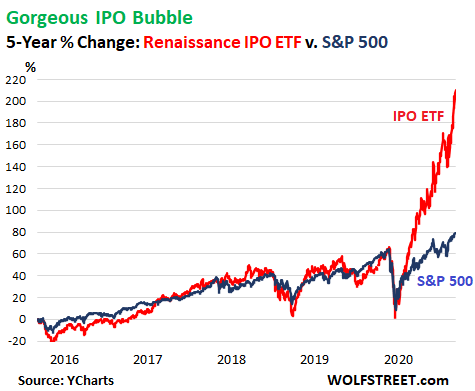 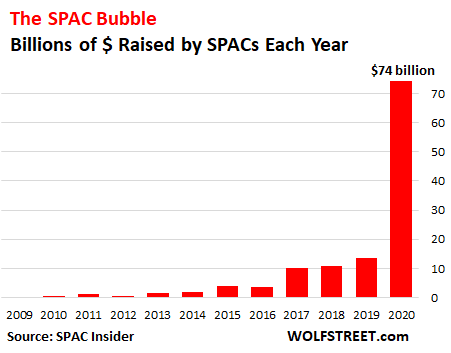 A SPAC is an alternative to an IPO. The SPAC undertakes a public offering and raises funds by selling shares, typically at $10 each, and warrants. These funds may eventually be used to acquire a startup company, which is the startup’s way of going public. There are still some hoops to jump through, but fewer hoops than in an IPO. But at the time when the SPAC goes public, investors have no idea what it will buy. They’re just giving it a “blank check,” hence “blank check companies.”

Blind exuberance along with a total repudiation of risk, math, and reality are needed to cause IPO prices to soar, which then allow these companies to extract many billions of dollars in cash from the blindly enthusiastic public, thus also allowing long-term and not-so-long-term investors to unload their shares at a huge profit.

This IPO window is now wide open, a rare event, and IPOs are now flying out, giving early and not-so-early investors a chance to exit with huge profits.

Including the DoorDash IPO, but not the Airbnb IPO and the other IPOs still coming this year, the total amount raised by public offerings in 2020 on US exchanges already exceeds $160 billion, a record according to Bloomberg.

But the IPO boom at this very moment is wheezing a bit it seems. The Renaissance IPO ETF is down 3.0% today, on too much hot air? But hey, there’s always tomorrow for the next pop.