But the problemita of pulling the rug out from under the entire banking system still needs to be addressed.

“As cash use continues to decline, the question naturally arises as to whether central banks should provide a digital alternative to cash that also provides some privacy features,” says the blog post, titled “Monetizing Privacy,” by the New York Fed. The post is based on a 26-page academic paper on digital payment methods that have been used broadly, the current market structure of digital payment methods, the data-gathering that occurs, versus cash payments that preserve privacy – and versus the “digital dollar” now being worked on.

Each time a digital payment takes place, the companies involved gather voluminous amounts of data and hang on to it because it gives them a competitive advantage in selling more goods or services to this particular consumer. This data has a lot of value for these companies – a key point we’ll get to in a moment with regards to the “digital dollar.”

While the share of cash in transactions has declined, US dollar bills are being hoarded like never before. “Currency in circulation,” which the Fed reports weekly on its balance sheet as a liability, has soared during the Pandemic, reaching another record last week of $2.06 trillion, having doubled since 2011: 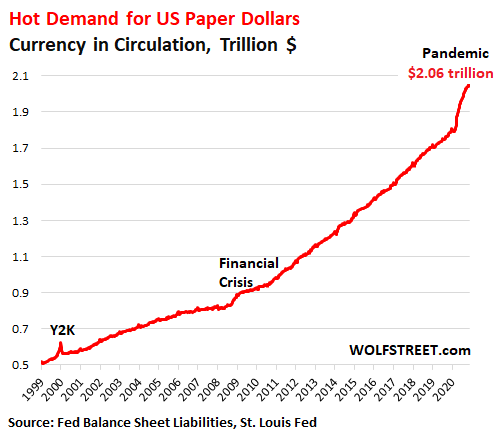 The amount of currency in circulation is demand-based: Banks have to have enough currency on hand to satisfy their customers’ demand for currency, and during a crisis, people load up and hoard cash, much of it overseas, and to meet this demand, banks have to buy more currency from the Fed, usually paying with Treasury securities for this paper.

The digital dollar is not going to replace “currency in circulation” for hoarding purposes. Dollar bills will continue to fulfill that function. Instead, the digital dollar will be designed to compete with digital payment methods and checks.

The digital dollar – or more broadly, a “central bank digital currency,” or CBDC – has been on the back burner or on no burner before the crisis. But it has now been moved to the front burner.

Numerous Fed heads, staff, and former staff have stepped forward since the Pandemic began, expounding the possibilities of the digital dollar. In late September, Cleveland Fed president Loretta Mester, said that the Fed is now even looking into harnessing the digital dollar to send money directly to households, even those that don’t have bank accounts.

So now the New York Fed is touting the digital dollar in an entirely different sense: privacy and pressuring companies to pay consumers for the data they collect.

This consideration of privacy from the prying eyes of Corporate America should go into the design of the digital currency, the article says, adding that “a privacy-preserving digital payment method may improve consumer welfare,” in ways that are somewhat unexpected.

Central banks, such as the Fed, don’t have a profit motive since they can create money at will. So they have no motivation to use the consumer data that they would obtain from their digital currency, and, the article says, are “better positioned, relative to private intermediaries, to commit to safeguarding data from outside vendors.”

So bear with me for minute. I’m trying to lay out their argument here.

The digital dollar would run in parallel with cash and the current digital payments methods. The logic goes, according to the New York Fed, that consumers would have a choice between Corporate America’s payment systems that collect volumes of data in order to use it and target that consumer, and a central bank digital currency that also collects data but does not use it.

With a digital dollar, consumers have suddenly power, the argument goes. They can tell Corporate America that they will henceforth pay with the digital dollar, thus depriving companies of the valuable data they collect from the payments system. And if a company wants consumers to use its payment system in order to enhance its competitive advantage, it must offer consumers incentives, discounts, or rebates (such as the familiar 2% cash back for using a credit card).

In effect, consumers could pressure a company into paying them for the data it collects, under the threat that if the company refuses to pay for the data, consumers would switch to the digital dollar, thereby depriving the company of the data that gives it a competitive advantage.

This is how consumers could “monetize privacy” – they could effectively get paid for their data, turning their data into money for them, not just the companies that harvest it.

“By helping consumers to monetize privacy, central banks would not be proposing a radical transformation to the payments landscape,” the New York Fed article says. “Rather, they would be preserving aspects of payments that existed prior to the digital revolution” – meaning a digital version of dollar bills.

The creation of a digital dollar is not going to be easy, however, and there are some unresolved problemitas, such as the entire banking system, the article says:

The last point is particularly tricky because the digital dollar would in theory eat into some of the core functions of the banking system, such as processing payments, including credit card payments and all the fees that come with it, taking deposits, and possibly even some lending functions. And the Fed isn’t going to pull the rug out from under the banking system. So, it seems, some details still need to be worked out.

But the idea that a digital dollar would apply competitive pressure on Corporate America to pay consumers for their data, or lose those transactions to the Fed, and that thus consumers would benefit from the digital dollar even if they don’t use it, is one more piece of evidence that the Fed is very seriously paving the way for this creature, and is pitching it in different ways.

Online sales jumped 37% in Q3, after 44%-Spike in Q2. Online food-and-beverage sales were up 160%. Read…  Online Sales by Category, in Weirdest Economy Ever

200 comments for ““Monetizing Privacy”: The Fed Fans Out, Touting the “Digital Dollar.” This Time, How Consumers Would Benefit”