Blackstone Group, BNP Cardif, Crédit Agricole, and others have also unwound or suspended their relationship with H2O.

Embattled London-based hedge fund H2O Asset Management — with €20 billion ($24 billion) of assets under management, down from €30 billion ($36 billion) last year — has a big new problem on its hands: its majority investor, French investment bank Natixis, has decided to sell its 50.01% stake. The decision comes after an FT investigation last year revealed that the hedge fund had invested substantial funds in highly illiquid assets, and it raises serious questions about H2O’s future.

H20 “will no longer be considered a strategic asset,” said Natixis in its third-quarter earnings statement. “Natixis IM and H2O AM have entered into discussions with a view to unwinding their partnership in a gradual and orderly fashion.”

One way of achieving this, the bank said, would be through an incremental sale of its stake in H20. The alternative would be for H20 to gradually take control of the distribution of its own funds during a transition period lasting until the end of next year. Either way, the result is the same: Natixis is calling it quits on a partnership that goes back 10 years, to H2O’s inception.

Natixis has not given concrete reasons for its decision to cut ties with H2O, apart from as part of a broader de-risking exercise. But it comes after H2O’s recent brush with market regulators in France and Belgium.

At the end of August, H2O was forced by France’s market regulator to gate a number of its funds, due to “valuation uncertainties” resulting from their exposure to high-yielding unlisted securities. Those securities are linked to the scandal-tarnished German financier Lars Windhorst, whose business dealings over the past two decades have left a long trail of bankrupt companies, stiffed investors, and unpaid debts.

By 2019, H2O was one of the biggest holders of bonds issued by Windhorst, with holdings of around €1.4 billion. At a time of ultra-low interest rates, the high yields offered by these kinds of securities were like manna from heaven for fast-growth funds such as H2O and the Woodford Equity Income fund (WEI), which ended up closing for good in late 2019 after the fund failed to unload its illiquid assets quickly enough to meet a flood of investor redemptions.

When the true nature of H20’s private securities was revealed in June 2019, Morning Star decided to downgrade its rating of the fund. As happened at WEI, many of the fund’s investors rushed for the exits, removing some €8 billion — around 30% of the total money parked in the fund — in just one week. As the funds fled, H2O’s founder and CEO, Bruno Crastes promised investors he would never gate the fund.

Just over a year later, he broke that promise, at the behest of France’s market regulator. In all, eight funds were gated, ostensibly to allow H2O to segregate the privately listed Windhorst assets from more liquid assets and place them in “side pockets.” Once that was done, H2O would complete the sale of the privately listed assets — at a sharp discount — to a Luxembourg-based consortium of investors called Evergreen Funding, which was assembled by none other than Lars Windhorst himself.

But even as all this was happening, Belgium’s top financial watchdog, the National Bank of Belgium, launched an investigation of its own into suspicious bond repurchase trades that took place between H2O and Duet Group’s Merit Capital NV, which also has close ties to Windhorst.

On October 13, H2O’s gated funds were finally reopened, six weeks after they were shuttered, although an estimated €1.6 billion of investors’ cash remains locked away in side pockets. Some investors took whatever money they could and headed for the exits. In the space of a few days, €429 million was withdrawn. After steadily rising for nine straight years, the hedge fund’s portfolio of assets has now slumped by a third since 2019, from €30.3 billion to €20.3 billion. 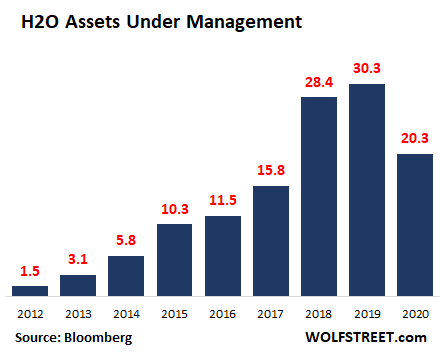 Natixis — itself owned by Groupe BPCE, France’s second largest banking group — has insisted that whatever happens at H2O, it will have “no financial impact” on its own balance sheet. H2O’s remaining €20 billion in assets, as of September 30, are a drop in the bucket compared to Natixis’ €910 billion asset base. But H2O did provide a disproportionate chunk of Natixis’ profits, earning it €211 million in 2019 — over 10% of the banking group’s net profits.

The hedge fund is attracting all the wrong kinds of attention and this is raising concerns about Natixis’ risk controls and oversight. The bank has enough problems of its own to deal with, having suffered significant trading losses in the second quarter as equity derivatives bets went awry. It is also heavily exposed to the aviation finance sector, which could see a wave of defaults in coming months.

For H2O, the divorce is likely to be a painful experience. Natixis has been instrumental in H2O’s success, providing operational support and access to a vast network of deep-pocketed investors, plus 50% of its operating funds, which the firm will now have to learn to live without.

A number of big market players have already withdrawn their support from H2O in recent months. They include Blackstone Group, which has dropped H2O as advisor of one of the its major funds; French insurance group BNP Cardif, which has suspended allocations to H2O; and French banking and insurance giant Crédit Agricole, which has stopped marketing H2O products through its life insurance subsidiary.

The loss for H2O of Natixis, its biggest backer, could rupture the fragile trust and remaining confidence investors still have in it. In the wake of the Woodford debacle and the regular gating of open-ended property funds in the UK, retail investors are wary about entrusting their money to funds that offer daily redemptions while investing heavily in highly illiquid assets. By Nick Corbishley, for WOLF STREET.

IWG — for “International Workplace Group,” previously known as Regus, the serviced-offices and coworking giant whose business model served as inspiration for WeWork — is undertaking an aggressive global restructuring program that is causing all kinds of headaches for its landlords and investors. Its U.S. subsidiary has already filed for Chapter 11 bankruptcy. Read…  WeWork Forerunner IWG/Regus Restructures its Business, Unleashing Mayhem on Landlords and Investors