The 44% spike on Wednesday and the more-than-unwind-plunge this morning are part of a very rough ride since the peak in March 2015.

After three days on edge, with trading halted all day Friday, Biogen shares plunged by over 30% this morning. On Wednesday, Biogen’s shares had skyrocketed 44%, from $247.01 to $355.63, after a report by staff of the US Food and Drug Administration claimed that Biogen’s experimental Alzheimer’s drug aducanumab appeared to be effective despite conflicting results from clinical trials and despite the twisted history of the drug. On Thursday shares fell 7.5%. Early Friday morning, trading in the shares was halted because there would be an announcement from the FDA’s advisory committee of outside experts on the drug’s effectiveness.

That announcement came Friday evening: the committee had voted with an overwhelming majority that the data did not show the drug to be effective. In addition, several committee members criticized the FDA’s own claims. And Monday morning – despite a huge rally in the rest of the stock market on another drug story, the Covid vaccine – BIIB plunged 31% to $227, where shares had first been in November 2013. A double-WTF moment (data via YCharts): 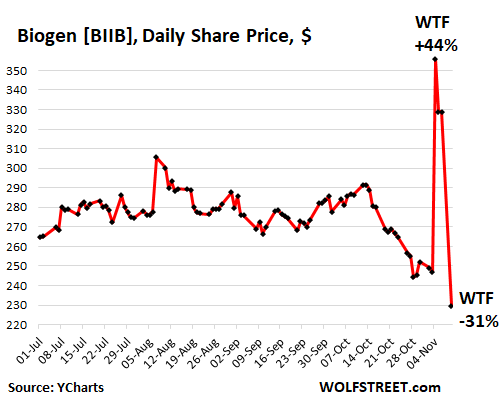 An FDA-approved drug for Alzheimer’s – whether effective or not – would be huge because millions of people with Alzheimer’s would be prescribed that drug, and insurers and Medicare would foot the bill, and ultimately consumers and taxpayers would foot the bill, for the enormous profits Biogen would extract from the deal. Analysts had touted the potential of the drug for Biogen: over $7 billion a year in revenues.

The press release Friday evening on the Committee’s findings concerning the data of several studies, said that the committee:

Though the findings of the FDA’s committee of experts are not binding for the FDA, it usually follows them. But given how flexible the FDA has become, how much money is involved here – potentially over $7 billion from the drug for Biogen – and how big of a problem Alzheimer’s disease is, the FDA could still approve the drug next year, effective or not.

But even if the FDA approves the drug, big insurers and Medicare may refuse to pay for the drug given the history and the tainted results. And that would dim the financial prospects of the drug.

The experimental drug has a convoluted history. In March 2019, Biogen and its partner Eisai ended two late-stage trials after an analysis found that the chance the drug would be effective in slowing cognitive decline was less than 20%. Later in 2019, Biogen did a 180 and said that one of the studies was successful and blamed the failure of the other study on design changes it had made during the trial.

All these announcements had massive impacts on the shares, driving them up or cutting them down by huge percentages as they went.

Biogen’s shares had hit a high on March 20, 2015, of $438 a share, after an enormous run-up. In trading this morning, shares are off 49% from that peak. And compared to the other WTF spikes and plunges in the shares, the huge spike on Wednesday and the more-than-unwind-plunge today are just part of a very rough ride since the peak in March 2015 (data via YCharts): 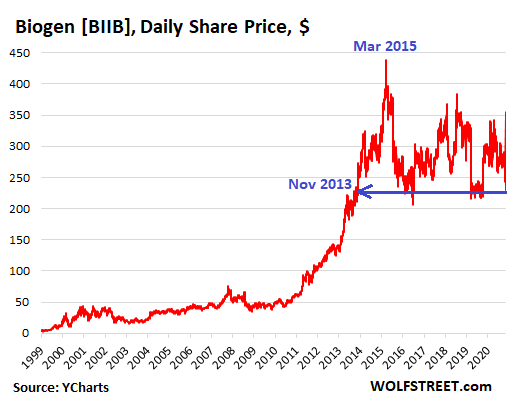