Commercial real estate is in turmoil, but San Francisco’s glut is dwarfed by the fiascos in Houston and Calgary.

They grabbed all available office space and leased it long-term, expecting to grow into the space in future years, thereby creating an artificial shortage.

As these leased offices sat around vacant, waiting for things to happen, suddenly things happened. The Pandemic put work-from-home on the map, and companies figured out how to manage it, and how at least some of their current and future staff would be working remotely, thereby shifting office expenses, including rent, from the company to households.

And they figured out how to implement more radical versions of this permanently, and suddenly all this vacant office space that they leased and were planning to stuff people into in future years seemed superfluous and expensive, and since they were locked into long-term leases that they can’t get out of, they put this office space on the market as subleases.

For example, Twitter leases its headquarters building in San Francisco from the Shorenstein Company, which owns the building. Now Twitter has switched to a permanent hybrid work-from-home approach – some employees will still need to go to the office, but others won’t. And it no longer expects to fill the empty space that it has been warehousing.

In September, it put over 100,000 square feet of its office space on the sublease market, hoping to get some rent out of this thing. Twitter doesn’t have to break even, just get some rent to cover some of its costs – and it would be way ahead. And so Twitter, along with the other companies putting office space on the sublease market, can undercut the market and put downward pressure on the rest of the market.

This chart from Cushman & Wakefield’s Q3 MarketBeat Report on San Francisco shows the surge in availability of sublease space in Q2 and Q3 (light blue), even as space offered directly by landlords has risen only moderately (dark blue). Overall vacancy rate has surged by 8.6 percentage points from Q3 last year to 14.1% at the end of September, driven by the sudden appearance of 6.18 million square feet (msf) of sublease space (chart via Cushman & Wakefield): 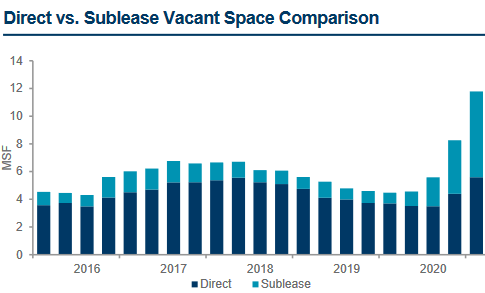 “This increase in vacancy can be found in all submarkets and size segments from large blocks of 50,000 sf or more down to partial floor tenants,” Cushman & Wakefield said.

While a total vacancy rate of 14.1%, after years of an artificial office space “shortage,” is rattling some nerves, it pales in comparison to the fiasco playing out in Houston.

Houston’s office-market fiasco, by far the worst in the US, started in 2014 with the oil bust that coincided with a Texas-sized office construction boom that drove vacancy rates above 20% years ago. And now, the situation was made worse by the trend to working-from-home. Data according to Cushman & Wakefield’s Q3 MarketBeat report for Houston:

Houston’s vacancy rate of 27.4% is by far the worst of any major city in the US. And in North America, it’s second only to downtown Calgary, Canada, another oil-bust-and-work-from-home fiasco where the vacancy rate now exceeds 28%.

At the same time, leasing activity in San Francisco collapsed to the lowest in “at least 30 years,” according to Cushman & Wakefield, plunging in the third quarter to 385,000 sf, just a fraction of the low point of the dotcom bust of 933,000 sf in Q2 2001 (chart via Cushman & Wakefield): 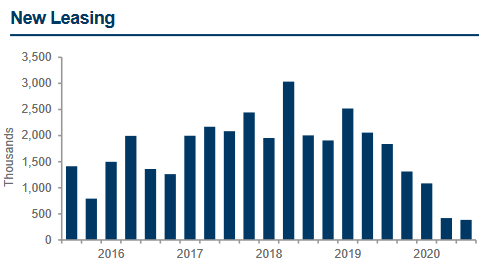 The sublease space has just now started to put rents under pressure. Asking rents remain confiscatory, at $78.45 per square foot per year on average, but are down 5.6% from the second quarter.

An additional 3.1 msf of office space was under construction at the end of the third quarter. Of this space, 1.4 msf are expected to be completed and be delivered by the first half of 2021. The 1.4 msf have been preleased during the Good Times, on the principle of office space warehousing.

Two other projects in San Francisco, including the mega-multi-use Oceanwide Center, have not preleased any space. The Oceanwide Center’s developer, China’s Oceanwide Holdings, ran out of funds. Construction, way over budget and behind schedule, was halted a year ago. The site, which would include two towers, one of which would be the second tallest in San Francisco, is a big hole in the ground, still, four years since ground-breaking. The developer has tried to sell it, and an interested buyer has been found, but the sale keeps getting delayed on due-diligence issues and other entanglements.

The Oceanwide fiasco predated the Pandemic and working-from-home, but any resolution was made vastly more complex by those factors. The project includes in addition to offices, you guessed it, a hotel and condos, just when many hotels in San Francisco are still shut down and their property owners face a crisis amid a dubious future, and when San Francisco is experiencing a sudden and historic condo glut.

104 comments for “How Fast Can a “Shortage” of Office Space Turn into a “Glut?” San Francisco Shows How Fast”