And that’s a huge temptation for a tiny Chinese company that installs solar-panel projects in various countries, with just $97 million in annual revenues in 2019, and nothing but annual losses going back years, whose penny stock, issued by a shell company in the Cayman Islands, is traded on the Nasdaq. It received a delisting notice on March 23 because its shares had been below $1 for 30 days in a row and because its market cap had dropped below $15 million. Given the Pandemic, the Nasdaq gave it till December to regain compliance.

And so now the company launched this scheme that ruthlessly took advantage of these “Robinhood traders” to drive up its share price – and boy, did the Robinhood traders blow our ears off today, “literally,” so to speak ?

This is how it worked: SPI Energy, headquartered in Hong Kong, issued a press release this morning in which it said that it – the tiny solar-panel project installer – would launch an EV company, called EdisonFuture, and suddenly manufacture EVs.

OK, there is no car, no prototype, no technology, no capital to develop anything, no nothing. In normal times, it would have been laughed out of the room.

But Robinhood traders saw to it that these are not normal times. Upon the announcement, its shares spiked by 4,387% from $1.04 at the close yesterday to $46.67 at 2:06 pm today, for just the briefest moment before collapsing by 71%, giving up over two-thirds of those gains and closing at $13.28 (by-the-minute share prices via YCharts): 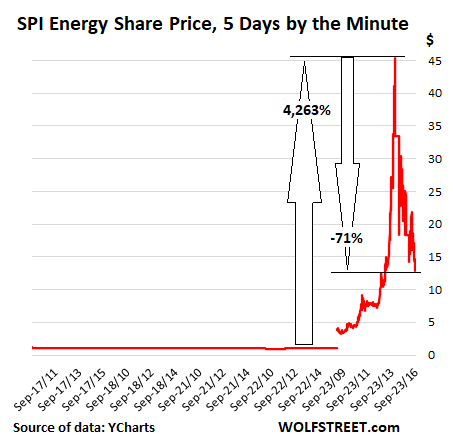 For crying out loud, this is a tiny money-losing outfit that installs solar-panel projects, with a delisting warning hanging over it, and no money to develop anything – it had just $2.7 million in cash at the end of December, per its annual report that it filed late with the SEC on June 29, 2020.

And it issues just one simple press release about creating a subsidiary that would develop EVs, and nothing to show that it’s actually seriously thinking about EVs, and Robinhood traders went hog-wild, triggering this massive idiocy in its shares.

Clearly the company knew what it was doing. This wasn’t an accident. And with this scheme, it wrapped the Robinhood traders around its little finger. Fine with me. And if hedge funds were able to front-run them and fleece them too, fine with me. But I’m wondering: SEC, are you awake?

In the grander scheme of things, it does shed light on just how crazy this market still is, how nutty, disconnected, logic-less, and as in this case, idiotic, the trading still is. And it tells me that the market won’t stop going down until this nuttiness has been blown out.

“Some things actually work really well virtually”; but “the vast majority of us can’t wait until we can be back in the office.” Read…  There Will Be Permanent Changes: Apple CEO Tim Cook Weighs in on Working from Home

109 comments for ““Robinhood Traders” Trigger Massive Idiocy on Scheme by Nasdaq-Listed Chinese Penny Stock that Skyrocketed 4,387% & Collapsed by Two-Thirds in Just One Day”