“Rapid growth is no longer possible” and “inflation is not going to be tolerated” in societies with slow wage growth: head of central bank of Singapore. It has been said out loud.

The solution now to the enormously ballooning debts in developed economies: Firing up consumer price inflation and let it run hot, according to the newest dogma trotted out incessantly by the Fed and other central banks, and hope that rapid economic growth will take care of the rest.

The US federal government debt alone has ballooned by $3.5 trillion in just eight months, and by $4.2 trillion in 12 months, to a breath-taking $26.7 trillion today: 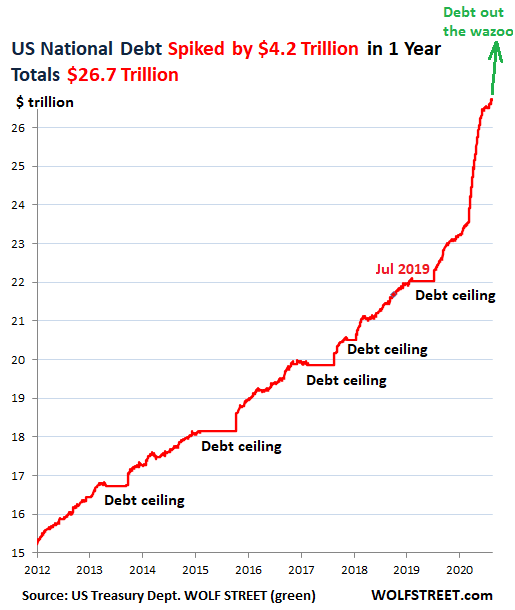 Rising inflation and high economic growth worked during the decades after the Second World War in bringing down debt levels in highly indebted countries, such as the US, but it won’t work this time, said Tharman Shanmugaratnam, a Senior Minister in the Singapore Cabinet, Chairman of the Monetary Authority of Singapore (Singapore’s central bank), and Deputy Chairman of the Government of Singapore Investment Corporation (Singapore’s sovereign wealth fund). He was speaking at the opening day of the virtual Singapore Summit.

“I think the big issue in the next decade is how to ensure that debts are sustainable,” he said. “First, it’s obvious that you can’t just keep increasing your debts. I don’t believe that the new high levels of debt that many countries are now moving towards are going to be sustainable without imposing a significant cost on growth as well as on equity within their societies.”

The question of “equity” is how these costs are being distributed over society. In other words, who’s going to get slammed by those costs, and who benefits.

“It’s not like the post-war period,” he said. “In fact, after the Second World War, many of the advanced countries started at very high levels of debt – the United States, the UK, many European countries – but they brought it down dramatically over 30 years. How did they do it? Rapid growth and inflation. And both of those are not possible anymore.”

“Rapid growth is no longer possible; these are now aging societies; productivity growth is much lower than before,” he said.

“Neither can we assume that today’s low interest rates remain low forever.” Interest rates will rise to more normal levels at some point, and this will raise the costs of this debt, she said. Governments must find a way to grow their economies without simply expanding the deficit.

“It’s a very serious issue,” he said. “You’re going to need fiscal reforms – not simply cutting down on spending. But you need quality spending and ways of raising revenue that don’t dent growth,” he said.

So there you have it. What everyone already knew has now been said out loud at an official event. The new dogma won’t work. There are solutions, as Tharman Shanmugaratnam pointed out, but they’re more complex to implement and don’t involve the ever so convenient printing press.

But borrowing and printing money forever, and hoping for consumer price inflation to reduce the debt burden, aren’t going to work in creating a healthy economy and prosperity.

What consumer price inflation does in today’s developed economies is destroy the purchasing power of the currency, and thereby the purchasing power of already struggling labor paid in that currency, and thereby dent consumption and create more social frustrations and inequities, that would then be addressed with even more borrowing and printing and inflation?

Still a lot of fawning coverage, but big dissenters are now given prominent spots, and loaded questions are used to politely hammer Powell into telling obvious nonsense. Read... Have You Noticed How Push-Back Against Powell-Fed’s Actions Is Getting Louder in the Mainstream Media, from NPR to CNBC?