Growth during the Pandemic. And the state sure needs the money.

The California Department of Tax and Fee Administration reported today that cannabis legalization and taxation in the state came in the nick of time. Just when the state is under extreme fiscal pressure, cannabis is pulling through: Cannabis tax revenues in the second quarter soared 32.6% from a year ago, to another record of $208.4 million (not including revenues collected by cities and counties). And this during the Pandemic!

Over the first two quarters combined, cannabis tax revenues, at $414 million, were up by 44% from the same period in 2019 and by 150% from the same period in 2018. This activity – not weed per se, which has always been a big popular business in the state, but the switch from black-market weed to regulated and taxed weed – has had a growth rate like hardly any other in the state at the moment: 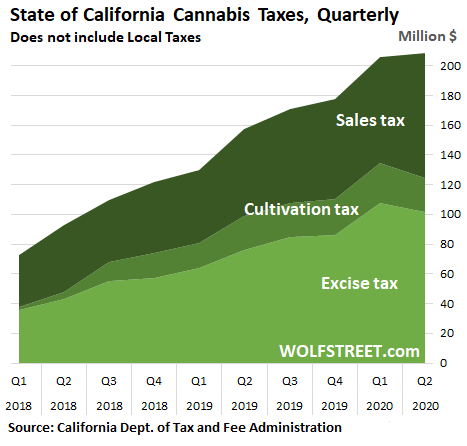 Cannabis tax revenues come in three categories: Excise tax, cultivation tax, and sales tax. With a sales tax rate of 7.25% (state 6% and mandatory local 1.25%), and $83.7 million in sales taxes reported, we can figure that reported weed sales in the quarter amounted to $1.15 billion. Given the growth trends, those revenues will come close to $5 billion for the year 2020.

In addition, first quarter tax revenues were heavily revised up today, from $134.9 million to $205.9 million. We were advised in the Q1 report back in May that this would happen:

“Due to the COVID-19 pandemic, 1st Quarter 2020 is a unique reporting period since approximately half of the taxpayers normally reporting have yet to file a return with the CDTFA. Revisions to 1st Quarter 2020 data are expected in mid-August after the 2nd Quarter return filing due date of July 31.” And that’s what happened today.

California Proposition 64, approved by the voters on November 8, 2016, started the process of turning the production, distribution, sale, and use of recreational cannabis by adults into a legal business.

“Medical” marijuana has been legal for adults in California since 1996 and remains exempt from sales taxes for those willing to jump through some hoops at their county health department, including a $100 fee.

Under federal law cannabis – including THC and CBD – is still illegal, being a Schedule One substance under the US Controlled Substances Act. And those sets of state and federal laws live uneasily side-by-side, observing some kind of truce for most producers, distributors, vendors, and users, and there is no guarantee that the feds won’t swoop in to shake things up. But there seems to be an understanding that the feds would focus enforcement on criminal organizations.

And the black market continues to do its thing. There are no pesky regulations to observe, and no taxes to pay, neither for the pot imported, produced, distributed, and sold in California, nor on the income generated by those activities. And in cities and counties that haven’t approved state-licensed dispensaries, the black market is all there is.

For black-market participants, there are major legal risks, including getting arrested and having product confiscated.

In 2019, the California Bureau of Cannabis Control alone seized nearly 24 tons of illicit cannabis, valued at nearly $133 million. The federal Drug Enforcement Agency reported that in California in 2019, it seized 3.19 million plants that had been cultivated outdoors and indoors, “eradicated” nearly 2,000 outdoor and indoor grow sites, confiscated about 100 tons of processed bulk marijuana, and made 1,567 arrests.

Black-market weed sales in California amounted to $8.7 billion in 2019, according to estimates by BDS Analytics and Arcview Market Research, cited by the Sacramento Bee, far outdistancing the $3.1 billion in legal weed sales in 2019.