Includes mortgages already delinquent before they were swept under the big federal rug of extend-and-pretend forbearance programs.

The mortgage delinquency-and-forbearance mess keeps getting messier – in record-setting ways. At the same time, the record-low mortgage rates continue to push certain other segments of the housing industry toward ever greater exuberance. That contradiction became humorously obvious on the Bloomberg News Economics front page, where side-by-side these two headlines appeared:

The overall delinquency rate for mortgages on one-to-four-unit residential properties soared by nearly 4 percentage points (386 basis points) during the second quarter, and by June 30 reached 8.22% (seasonally adjusted), the highest in nine years, according to the Mortgage Bankers Association’s National Delinquency Survey.

This nearly 4-percentage point jump in the overall delinquency rate was the largest in the history of MBA’s survey going back to 1979.

The delinquency rate of conventional mortgages jumped by 352 basis points, to 6.68%, the highest rate since Q2 2012.

Delinquency rates here include mortgages that were already at least one month delinquent before they entered into a forbearance program. So these mortgages are still delinquent, and the borrower has stopped making payments before entering into forbearance, but the lender has agreed to not pursue its legal rights for the agreed-upon period of forbearance.

The delinquency rates here do not include mortgages that have undertaken the final steps: moving into foreclosure. But the current trend for lenders is to move mortgages into forbearance and put them on ice for as long as possible – “extend and pretend” – rather than foreclosing on the property.

The states with the biggest increases in delinquency rates at the end of June compared to the end of March were:

Last week, CoreLogic released a report that showed the 30-plus day delinquency rates in the 10 largest metropolitan statistical areas through May. So this lags by one month the MBA’s report, but provides insights by metros. These delinquency rates at the end of May ranged from 4.9% for the San Francisco metro, to 13.9% for the Miami metro. This data also includes mortgages that were delinquent before they entered forbearance (chart via CoreLogic): 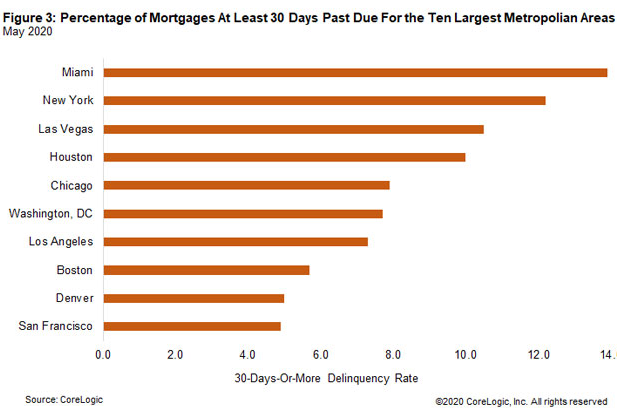 Other smaller metros got hit hard too, with the sharpest increases in metros that are dependent on tourism – such as Kahului, HI, and Las Vegas, NV – and metros in the oil patch – such as Odessa, TX. And Houston, in terms of an oil-patch metro with a massive delinquency problem, is already on the list above, number 4 in the chart, with a rate of just around 10%, just below Las Vegas.

This mess playing out in the mortgage market has been largely swept under the rug of widespread, government-supported forbearance programs – to where no one really knows what will happen to those mortgages when these forbearance programs end. And the exuberance in other parts of the real estate industry, such as with homebuilders, and even with mortgage brokers and mortgage lenders that arrange refi and purchase mortgages, is a contradiction to what is going on with these swept-under-rug delinquencies that will eventually come to a head.

157 comments for “Mortgage Delinquencies Jump by Most Ever. 60-Day Delinquencies Hit Highest Level Ever. Record 16% of FHA Mortgages Delinquent. What a Mess”