Some people returned to work, but 1.64 million newly-out-of-work people filed for state or federal unemployment insurance. Labor market at essentially the same level of terribleness for months.

The total number of people who continued to claim unemployment insurance under all state and federal unemployment programs jumped by 1.3 million from the prior week to 32.12 million (not seasonally adjusted), the Department of Labor reported this morning. It was the second highest ever. 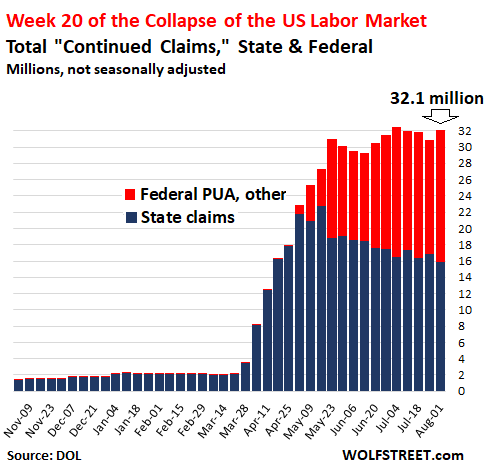 Blue columns: There were still 15.85 million people who continued claiming unemployment insurance under regular state programs, not seasonally adjusted. This was down a tad from the prior week, and has been on a continued downtrend since May.

Red columns: The number of people who continued claiming unemployment insurance under all other programs – and we get to those in a moment – jumped by 2.27 million to a record 16.27 million.

It boils down to this: The number of initial claims filed under all state and federal programs in the week ended August 1 by people who’d newly lost their work was still catastrophically high at 1.64 million, but less catastrophically high than in the prior week. And some people returned to work, but not nearly enough. So the total number of people who continued to claim unemployment insurance under all programs rose again.

People can only claim unemployment insurance either under a state program or under a federal program, but not under both and not under multiple programs. All types of claims are processed by the same state unemployment office.

Initial claims under the federal PUA program for contract workers (Pandemic Unemployment Assistance) came to 655,707 not seasonally adjusted. This is still a huge influx of newly out-of-work contract workers, but smaller than in the prior week.

Under those two programs combined, 1.64 million people (not seasonally adjusted) who newly had lost their work filed their initial unemployment claims.

Continued Claims under other programs.

But there are more programs, and those continued claims add up.

STC / Workshare: 413,385 continued claims. These state programs “allow an individual who is employed for a portion of the week to collect UC. Under STC, an employer elects to avoid layoffs by reducing the number of regularly scheduled hours of work for all, or a group of, individuals during disruptions to a firm’s regular business activity…. STC looks at the hours of work and provides individuals a pro-rata share of weekly benefits based on the reduction in weekly hours of work.”

Extended Benefits: 67,909 continued claims. Covers workers who have exhausted regular unemployment insurance benefits during periods of high unemployment. It provides up to 13 additional weeks of benefits when a State is experiencing high unemployment, and up to 20 weeks in some states.

Data Chaos, and what it means…

There are allegations of fraud and double-dipping, but also of under-counting, and of states still being woefully behind processing claims, given the historic onslaught of claims and the complexity of the new federal unemployment insurance programs, that states have to administer with their ancient systems, exacerbated by staffing problems state unemployment offices had trying to ramp up to deal with the crisis, and the subsequent training problems that emerged as they tried to train those new people, in order to deal with the crisis. There are constantly new stories emerging of just how chaotic this still is.

But amid all this data chaos, the picture that emerges is that of a labor market that had taken a brutal hit early in the crisis, and while some aspects of it are recovering and some people are returning to work, other segments are seriously deteriorating, and shifts are occurring, but the overall situation has remained essentially at the same record level of terribleness for the past few months.

151 comments for “Number of People on State or Federal Unemployment Insurance Jumps to 32.1 Million, Second Highest Ever: Week 20 of U.S. Labor Market Collapse”