The Fed is funding consumption circuitously via Treasuries and government stimulus spending, shifting impact from asset prices to consumer prices. 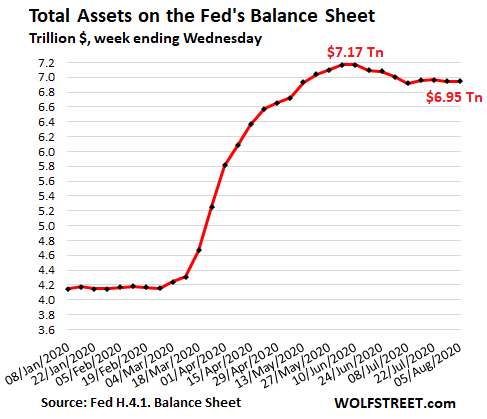 Repos continue to be zero, week 5.

The Fed is still offering huge amounts of repurchase agreements every day, but since it made them purposefully less attractive in mid-June by raising the bid rate, there have been no takers: 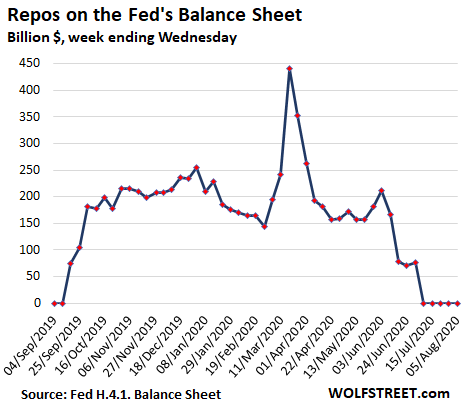 These Special Purpose Vehicles (SPVs) are entities that the Fed created and that it lends to. The SPV then buys assets or lends. Currently these are the active SPVs:

In addition, there is Primary Credit (labeled “Pr. Cr.” in the chart), which are loans the Fed makes directly to banks.

Their combined balance fell by $6 billion from the prior week, the fifth week in a row of declines, to $201 billion, the lowest since June 17. The composition has changed, with the original three entities being phased out, and new ones having remained roughly stable over the past few weeks.

The largest SPV, the PPP loan facility, where the Fed buys PPP loans from banks, dropped by $3 billion to $68 billion, the first real decline since it started, indicating perhaps that some of the PPP loans are starting to be forgiven (taxpayers eat them) and are coming off the banks’ books: 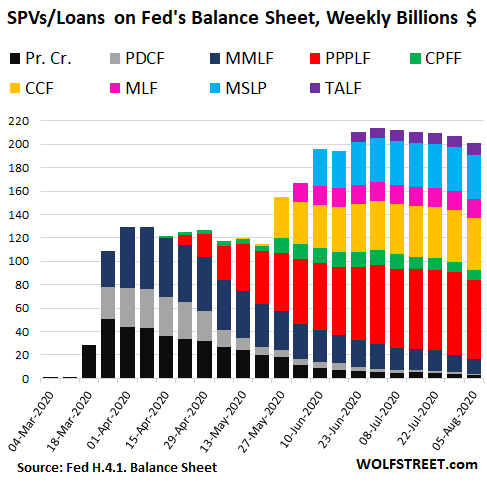 The Fed’s “dollar liquidity swap lines” were implemented and expanded during the crisis to provide dollars to select other central banks. But they have fallen out of use, as maturing swaps are rolling off without replacement. After eight weeks in a row of declines, swaps are now down to $106 billion. The Bank of Japan (red) accounts for about 80% of the total: 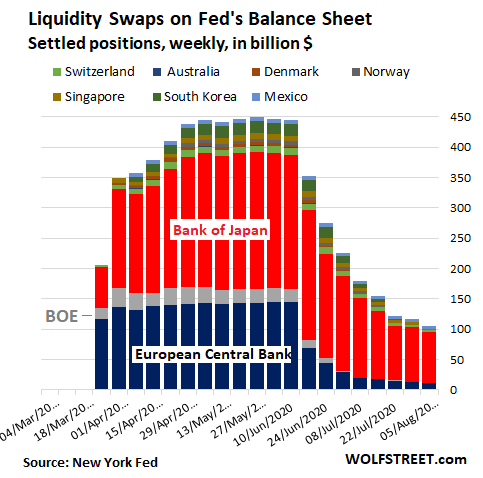 The balance of mortgage-backed securities remained at $1.93 trillion, after having dropped by $37 billion in the prior week. These balances appear erratic, for two reasons:

MBS come with pass-through principal payments as mortgages get paid off. During the current mortgage refinance boom, there has been a huge volume of principal payments that are passed through to the holders, including the Fed, reducing the balance of MBS on the Fed’s balance sheet. Just to keep the balance level, the Fed has to buy large amounts of MBS.

MBS trades take 1-3 months to settle, and the Fed books them only after they settle. So what we’re looking at today reflects purchases from 1-3 months ago that finally settled, less current passthrough principal payments. Today’s balance is about equal to the balance on June 17: 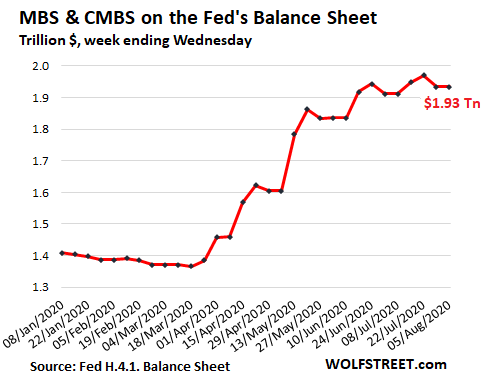 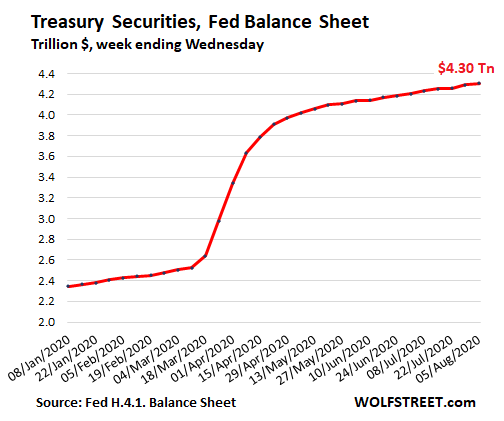 Think about this: The government is issuing an enormous amount of new debt to fund the stimulus spending, such as the stimulus payments to consumers and the large-scale unemployment insurance payments. Much of this stimulus money is spent by consumers which supports the economy. When the Fed buys Treasury securities as the government issues them, it in essence sends its funds on a circuitous route via those Treasuries and the government stimulus into consumption. This mechanism is shifting part of the impact from asset prices to consumer prices.