The evidence keeps piling up.

Sales of new single-family houses (based on signed contracts) rose 6.9% in June, compared to June last year, to a seasonally adjusted annual rate of sales of 776,000 houses, according to the Commerce Department this morning. It was a hair above January’s 774,000, having recovered all of the plunge during February, March, and April — thereby making it the highest rate of sales since July 2007: 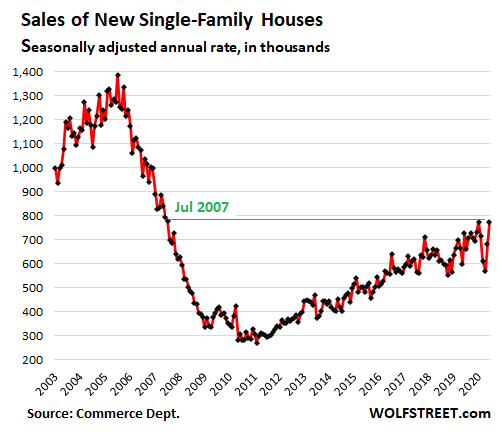 It may be another tidbit in the larger saga of potential shifts in the housing market that were either triggered by, or accelerated during the Pandemic: a shift from condos toward houses, and particularly a shift from condos in large urban centers toward houses in the suburbs, and a focus on new houses, perhaps motivated by the issues and complexities surrounding the viewing and purchasing of an existing home from a homeowner during the Pandemic.

The shift from condo to houses in existing home sales.

And prices of existing homes show a similar divergence. The Median price of single-family houses rose 3.5% nationally, but the median price of condos ticked up only 1.4%, according to the NAR.

In large urban areas, the trends may be steeper. For example, in the San Francisco Bay Area, condo sales in the biggest most urban counties plunged by 16%-34% in June compared to June last year, according to the California Association of Realtors.

And the median price of condos in those counties dropped, and sharply in some of them:

Even as condos have come under sales and price pressures, sales of single-family houses in the Bay Area overall declined only 7.8% in June year-over-year, and the median price rose 4.2%.

Something is going on, of which we’re getting to see the first few glimpses.

Back to new houses.

The median price of new houses, as volatile as it is with big month-to-month drops and bounces, has remained in the same range since 2016. The high occurred in late 2017. In June, the median price bounced off the hit it took in May and April, to $329,200, up 5.6% from June last year: 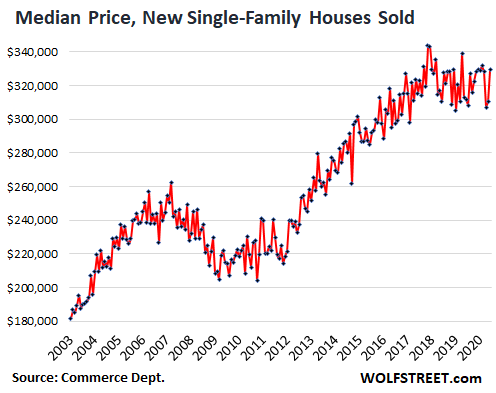 The number of unsold new houses – these are spec houses – declined to 307,000 houses, seasonally adjusted, the lowest since May 2018.

Given the increase in sales in June, supply at that rate of sales fell to 4.7 months, at the lower end of the multi-year range: 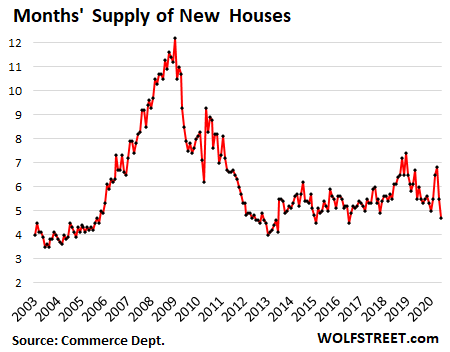 I’m still waiting to see if this shift from condos to houses and from urban centers to the suburbs is the early phase of a long-term trend in line with the shift to work-from-home and demographic dynamics, or just a knee-jerk reaction to the pandemic that will blow over and reverse in a few months.

If it turns into a long-term trend, it will have big implications for real estate and for how cities are being structured.

But wait… there’s always the reaction: Drop the prices of these big-city condos enough, and buyers will come.

More signs of a move from the cities to the suburbs? Supply of existing houses is tight; condos are piling up. Read… Home Sales Down -11% from Year Ago, Condos -23%, but Bounce off Lockdown-Lows

131 comments for “Shift from Condos to Houses and from Big Cities to Suburbs? New House Sales Rose 6.9% fr. June Last Year, to Highest Level since July 2007”