Owner of a small cafe that specializes in fine cakes and sandwiches tells me: “We’ll be lucky if we get half the normal number in July and August.” It’s now “all about damage control.”

Yesterday, my wife and I took our first walk to the beach since Spain entered lockdown almost three and a half months ago. From there, we meandered through El Born, which together with Sant Pere and Santa Caterina, forms one of the four barrios that make up Barcelona’s old town. El Born’s shaded cobbled streets and plazas are — or at least were — ground-zero for Barcelona’s bustling tourism trade. But that trade has been decimated by the virus crisis, and the streets of El Born are half empty, many of the hotels are still closed and an eerie quiet pervades the once-thronged plazas.

In some parts, there are already visible signs of crisis. As in the darkest days of Spain’s last housing crisis (2010-13), boarded-up shops, bars, restaurants and other street-level businesses are everywhere. In one narrow three-block street called Flassaders, I counted nine shuttered businesses. Eight were already up for rent. Here are some samples: 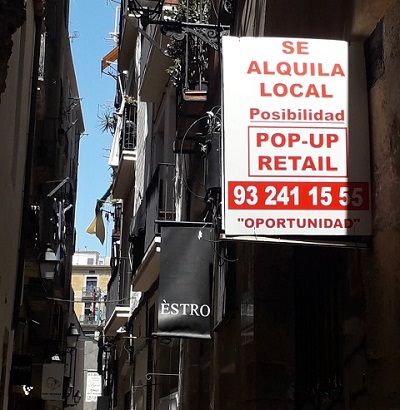 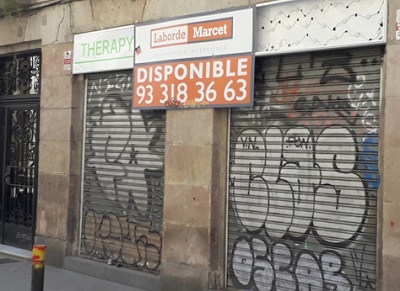 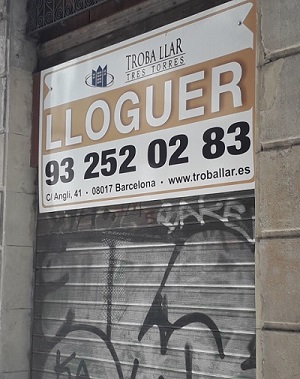 Spain’s biggest property website, Idealista, is currently advertising 244 retail properties in El Born, Sant Pere and Santa Caterina. They range from tiny little shops on tucked-away alleyways to sprawling bars, restaurants and stores on some of the barrio’s busiest thoroughfares.

After years of relentless gentrification, El Born was already in trouble before Covid arrived. Retail rents had reached levels that many businesses could no longer pay. Petty street crime, much of it targeting tourists, had become rampant, and in some cases violent. And many tourists had begun to explore other neighborhoods such as Gracia and Sant Antoni. The only way for shops and other businesses to pay their rents and still survive was to target big-spending foreign tourists. But now they’ve gone. And when they come back, it will be in smaller numbers and shallower pockets.

Facing the prospect of continued sluggish sales, many local traders in El Born, rather than taking out more debt to pay their rents, have simply shut up shop. Yet despite the glut of properties on the market, the rents being advertised are still absurdly high, suggesting that many of the property owners — most of them well-heeled local families — haven’t quite accepted that market conditions have changed dramatically.

In Spain’s last financial crisis, El Born, and Barcelona’s Gothic Quarter as a whole, escaped the worst of the fallout, thanks to the rapid recovery and resurgence of the tourism industry. This time, it’s the travel and tourism industries that have been sledgehammered by the covid-inspired lockdowns, travel bans and other restrictions, leaving barrios like El Borne and Sant Pere on the front lines of this new crisis.

According to Barcelona Comerç, 91% of the city center’s shops have reopened. In a recent survey, around half of the association’s members said their sales have fallen by up to 25% while another a quarter said that sales had dropped by 50%.

So far, just over 3% of local traders in the city center have shut their stores, but this is likely to soar to 15% soon, since many stores have only stayed open to liquidate their stock. And “this figure could rise to 30% if structural measures are not taken to help the sector out,” says Barcelona Commerc’s president, Salva Vendrell.

The Spanish government has so far offered €4.25 billion in financial assistance to Spain’s tourism industry, mostly in the form of emergency loans. It pales in comparison to the €43 billion in forgone tourist euros already clocked up as a result of the crisis.

And the tourists have still not arrived.

On any normal Summer’s day, in any normal year, Barceloneta Beach, normally one of Europe’s busiest beaches, would be heaving with tourists — so much so that most Barcelona residents stay clear of the place. But this year is no normal year. I took this photo a couple of days ago: 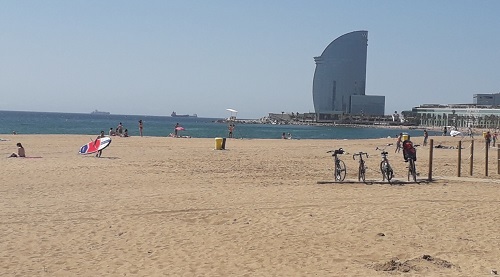 Also, the day on which the photo was taken — June 23 — was no normal day. It was the eve of Saint John the Baptist Day, which is a public holiday in Catalonia. Normally, in the evening tens of thousands of Barcelona residents converge on the city’s beaches to usher in the Summer by downing copious volumes of alcohol, sitting around bonfires and letting off fireworks and firecrackers with the sort of reckless abandon that bureaucrats in Brussels are determined to stamp out.

This year, thanks to the novel coronavirus, the city’s beaches were closed to the public. So, many people arranged to spend the holiday in beach towns dotted up and down the coast, hopefully not taking the coronavirus with them. This partly explains why the streets of Barceloneta looked like this yesterday: 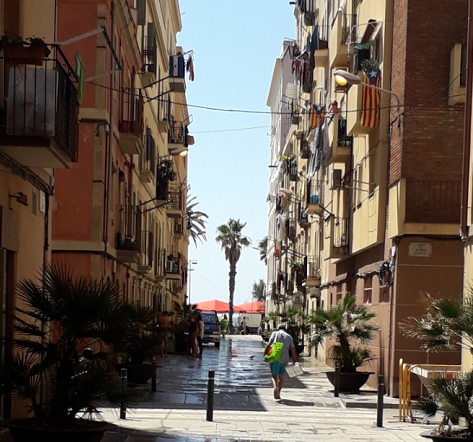 But there’s also the fact that Barcelona, like so many other parts of Europe, is suffering its worst ever tourism drought. With its borders tightly sealed, Spain registered zero tourist arrivals in April. In May, it received about 43,000 visitors, down 99.5% from last year. 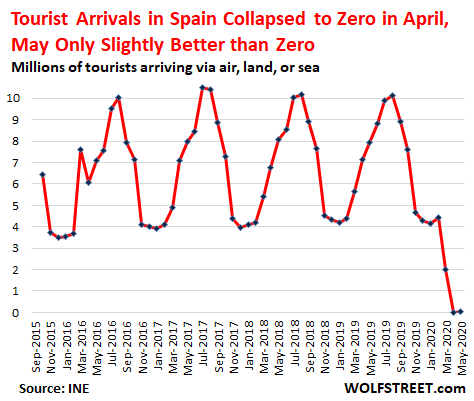 In seven days’ time, the Spanish government will finally reopen Spain’s borders to international tourism. But travelers from 54 nations, including the U.S., Russia and Brazil, will probably still be barred from the bloc. And cruise ships will be banned from docking at Spanish ports for at least the whole of the summer.

Of the remaining nationalities that can travel to Europe, no one knows just how many will actually come. Some of the business owners I’ve spoken to are not exactly optimistic.

“We’ll be lucky if we get half the normal number in July and August,” says the owner of a small cafe in Barceloneta that specializes in fine cakes and sandwiches. This summer, she says, is now “all about damage control.”

Many Catalan business owners are hoping the domestic market will pick up some of the slack. But they’re not holding their breath. Despite the charm offensive being launched on all fronts by Catalonia’s regional government to try and lure holiday makers from other parts of Spain, with the slogan “Cataluña es tu casa” (Catalonia is your home), Catalan businesses know that most Spaniards still remember that roughly half of the people of Catalonia wanted to declare independence from Spain just three years ago. Those Spaniards who still hold a grudge will choose to spend their vacation bucks elsewhere.

That means that Barcelona — and many places like it in Europe — is about to have its quietest summer for many a year.

For many local residents who have had to put up with all the externalities of unfettered mass-tourism (myself included), it will probably make a welcome change. But for those whose jobs, businesses and rental income depend on tourism, the pain has only just begun. And it’s likely to end up affecting even those who are currently enjoying the idyllic — yet still slightly eerie — sight of quiet streets and empty beaches. By Nick Corbishley, for WOLF STREET.

But the ECB went into high gear to soothe the pain of the banks. Read… Massive Credit Losses to Hit European Banks in Q2 and into 2021, Particularly When Debt Moratoriums Are Lifted

91 comments for “Barcelona’s Epic Tourism Boom Is Over, Now the Crisis Begins: My Walk to the Beach”