“The next big shoe to drop will be when appraisers call a declining market in early August.”

The Virus has thrown the housing market into turmoil. Housing moves slowly. It took the last housing bust four years to play out. But the underlying dynamics can change quickly. So here are some of the underlying dynamics from the four counties that form the North Bay of the San Francisco Bay Area: Marin (just north of the Golden Gate Bridge), Sonoma and Napa (Wine Country), and Solano (easternmost part of the North Bay).

New listings plunged 62% in April from a year ago to just 675 houses and condos, after having already dropped in March. This is supposed to be the spring selling season, and new listings are supposed to surge, but sellers aren’t interested in having potentially infected people traipsing through their home; and they know that buyers are woefully absent, and it doesn’t make that much sense to list the home because previously listed homes are still languishing on the market.

The drop in new listings in March and April are early signs that pent-up supply is building up.

As many of the homes that have been listed in prior months haven’t sold, and despite the terribly weak new listings, inventory of homes for sale fell only 22% from a year ago (to 2,010 homes), and has been rising sequentially since January.

The drop in closed sales caused months’ supply, despite plunging new listings, to jump by 22% to 2.8 months. 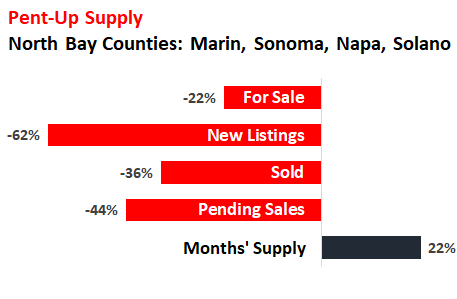 The charts below show the progression for some of those metrics over the past 12 months, from April 2019 through April 2020.

This is the collapse in new listings depicting how the spring selling season crashed in March and April. The green arrow indicates where new listings went last year: 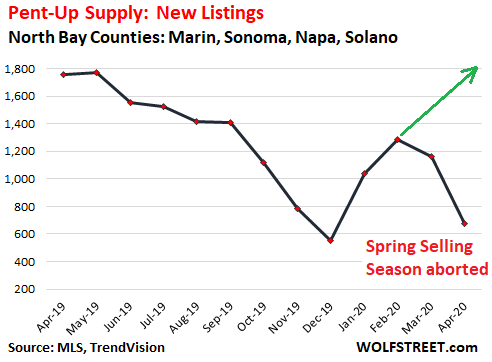 The inventory of homes for sale ticked up sequentially despite plunging new listings, as much of what was put on the market in prior months hasn’t sold yet: 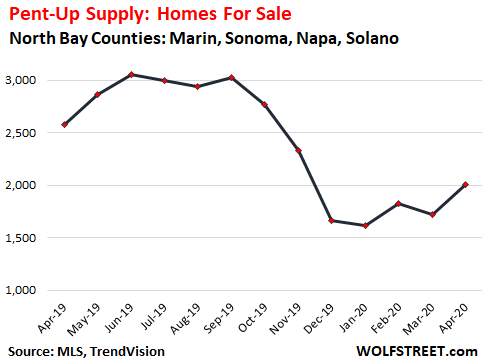 Closed sales fell 22% from March to April, which is in the spring selling season when sales are supposed to roar higher. Last year at this time, sales jumped 21%. This produced the year-over-year plunge in April of 36%: 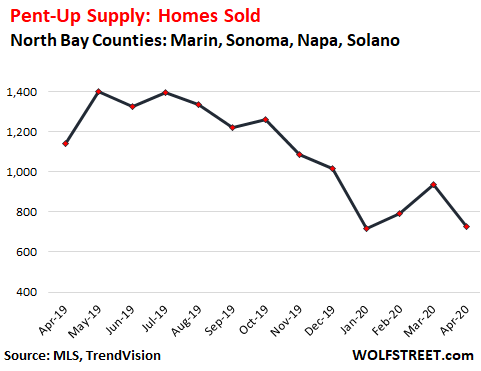 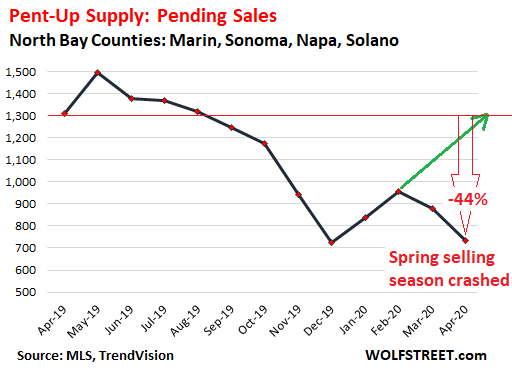 “The next big shoe to drop will be when appraisers call a declining market, probably in August but perhaps as early as July,” Stone said. “Due to the nature of their business, they have to wait for closed sales to show two or more months of price declines.”

“An Appraisal is a ‘reasonably supported opinion of value.’ Even though they see the train is out of control, they have to wait until it is off the tracks before calling it,” he said.

And this bleeds into the difficulties of getting a mortgage. “Think getting a loan is hard now?” he said. “‘We’re sorry, Mr. Stone, but the property didn’t appraise high enough, and we can’t make the loan,’”

The North Bay with its Wine Country has a large number of vacation rental houses. They’re dead now. And this isn’t likely to change a whole lot in the foreseeable future.

“This will bring both lower rents as the owners with strong hands rent long term, and an increase in inventory as the smarter ones with weak hands try to get out while the getting is good,” Stone said.

So there you have it: A most splendid housing bubble and an equally splendid vacation-rental boom that were both caught at the peak in their most vulnerable state by The Virus that upended everything. Stone sees a very rough market for years to come.

Mall tenants’ collapsing one after the other without replacement has a pernicious impact on property prices. Read... US Commercial Real Estate Prices Plunged in April, Mall Prices Collapsed

113 comments for ““Pent-up Supply” is Building up in the Housing Market: Example of San Francisco Bay Area’s North Bay”