It started in mid-February for jet fuel and in mid-March for gasoline.

On Thursday, Texas-based shale-driller Concho Resources reported a quarterly loss of $9.3 billion, after writing down the value of its oil and gas assets by $12.6 billion.

Also on Thursday, it was reported that Oklahoma-based Chesapeake Energy, a pioneer in shale-drilling, was preparing to file for bankruptcy (what’s taking so long?).

Still on Thursday, Royal Dutch Shell shocked the markets when it announced that it would reduce its dividend for the first time since 1945 (by 66% from $0.47 to $0.16). “The duration of these impacts remains unclear with the expectation that the weaker conditions will likely extend beyond 2020,” the statement said. The already beaten-up shares plunged another 17% in two days. Shares are down 47% year to date.

Earlier in April, among the oil companies that have already filed for bankruptcy, were two high-profile oil drillers, Whiting Petroleum and Diamond Offshore Drilling.

The drama is centered on the collapse in demand for crude oil. Crude oil is primarily used for two purposes: transportation fuel and as feedstock for the chemical industry. Even before the crisis, demand growth has been weak, particularly as transportation fuel in developed countries. But production has been surging, and amid ample and growing supply, prices were already weak, when the coronavirus hit.

Demand for transportation fuel in the US collapsed.

The EIA measures weekly consumption in terms of product supplied, such as by refineries and blenders, not by retail sales. 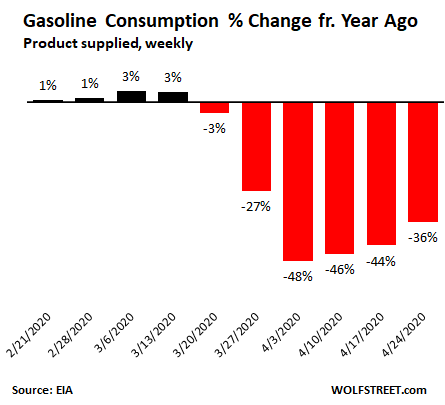 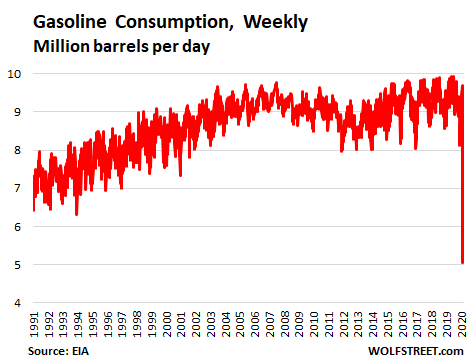 Consumption of jet fuel (kerosene type) collapsed even more, peaking, if you will, in the week ended April 10 with a 72% year-over-year plunge. The decline in jet fuel demand started earlier than with gasoline, as flight cancellations were starting in the second half of February: 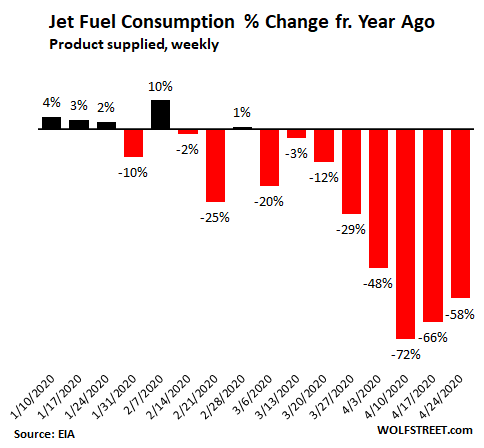 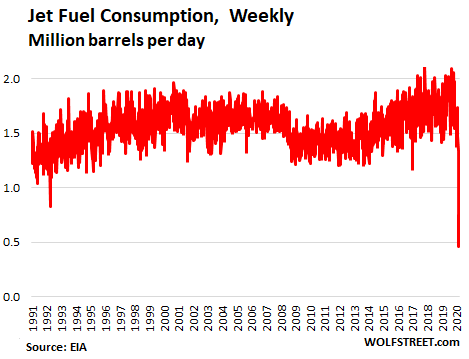 Consumption of distillate is highly variable because of its uses. It includes diesel fuels and fuel oils, such as for space heating and power generation, which are seasonal. So this is not as clear cut.

Distillate consumption plunged between 18% and 25% in the last three weeks, compared to the same weeks a year ago. But consumption of fuel oil for heating and power-generation is so seasonal and so volatile that these moves are not totally unusual. However, consumption in the week ended April 10 plunged to 2.76 million barrels per day, the lowest weekly demand since 1999: 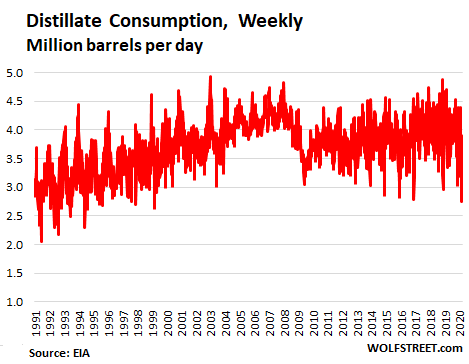 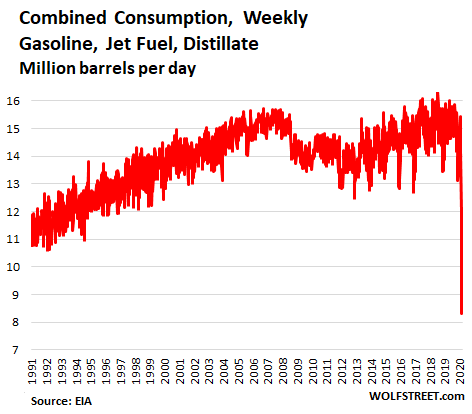 In terms of transportation fuels, this is what the oil industry is facing: an unprecedented, and until now unimaginable collapse in demand that has persisted for over four weeks. While it may improve ever so gradually as we move forward, it will remain at multi-decade low levels until the US economy’s travel and commuting patterns, and its shipping patterns find their way to whatever the new normal might look like.

The chaos in the crude oil market reached a historic level when on April 20, 2020, West Texas Intermediate (WTI) crude oil front-month futures prices fell below zero dollars per barrel for the first time since trading began in 1983.The EIA dissected the historic event. Read… Postmortem of the Infamous Day WTI Crude Oil Futures Went to Heck in a Straight Line

266 comments for “Bone-Chilling WTF Charts of the Collapse in US Demand for Gasoline, Jet Fuel, and Diesel”