The biggest European banks have started to report their earnings against a bleak backdrop of locked down economies, plunging economic activity, surging business closures and rising loan defaults. Each earnings call laid bare the scale, scope and complexity of the problems and challenges facing a European banking sector that never really recovered from their last two crises — the Global Financial Crisis followed by the Euro Debt Crisis.

The Stoxx 600 Banks index, which covers major European banks, fell 4.5% on Thursday. Today, continental European stock markets were closed (May Day), but the London Stock Exchange was open, and the index ticked down another 1% (to 88.8). The Stoxx 600 Banks index has already collapsed by 40% since Feb 17, when the Coronavirus began spreading through northern Italy. After the initial 40%-plus plunge in late February and early March, the index has remained in the same dismally low range: 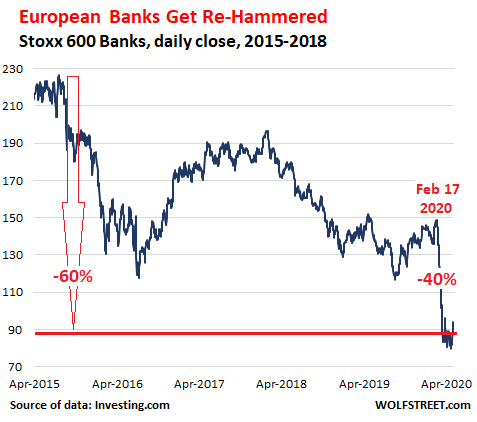 On April 21, the Stoxx 600 Banks Index had closed at 79.8, down 83% since its peak in May 2007, and the lowest since 1987. The following day, the ECB announced it was going to accept junk bonds as collateral when banks borrow from it. Yesterday, the ECB was excepted to go even further and announce that it would actually buy junk-rated bonds, as the Federal Reserve announced a few weeks ago. But the ECB didn’t announce it, and the Fed hasn’t bought any junk bonds yet either.

Unlike the Fed, whose 12 regional Federal Reserve Banks are owned by the banks in their districts, and to whom bank stocks are therefore hugely important, the ECB couldn’t care less about bank stocks, as long as the banks themselves don’t collapse. The ECB’s primary focus is on keeping the Eurozone together, a task that is growing more difficult by the day.

Now that we are in the grip of yet another full-blown financial crisis, triggered not by the banks this time, but by a pandemic and the response to it, central banks are throwing just about everything they can at the crisis, which is moving far faster and wider than the last one.

This was amply borne out by the quarterly earnings reports of the following four European banks:

Societe Generale reported a net loss of €326 million after revenue from its equities trading slumped by a staggering 99%, which the bank duly blamed on coronavirus-related market volatility. The French lender also set aside €820 million to cover bad loans and warned that provisions — including for defaults and two fraud cases — could hit €5 billion by the end of the year. The bank’s shares, already the worst performing among large European lenders, slumped 8.6% on the day of the report and are now down 55% since Feb 17.

BBVA, Spain’s second largest bank, reported its worst ever quarterly loss, amounting to €1.8 billion, after the bank took a whopping €2.1 billion write-down in the United States. This came on the heels of a €1.3 billion write-down of its stateside operations in the previous quarter. Profits also plunged 40% in its biggest market, Mexico, which for many years has accounted for well over a third of the group’s global profits. The bank also faces risks in another major market, Turkey. Its shares slumped 5.5% on the day and are down 43% since Feb 17.

HSBC, Europe’s largest lender by assets, declared a pre-tax profit of $3.23 billion, down 48% year over year. The bank has increased its bad loan provisions by $2.4 billion to $3 billion, its highest quarterly level in nine years. That includes a significant charge related to “a corporate exposure in Singapore,” which is likely to be the insolvent oil trader Hin Leong. HSBC’s shares have plunged 31% since Feb 17.

Banco Santander, the Eurozone’s second-largest bank by market value, after BNP Paribas, saw its quarterly net profit dive by 82% as it set aside €1.6 billion to cover expected loan losses caused by the COVID-19 pandemic. The bank saw particularly sluggish growth in its domestic market, Spain, and the UK, while reported income in its most profitable market, Brazil, fell 3.7%. Santander’s shares have fallen by 49% since Feb 17.

Neither of Italy’s two largest banks, Unicredit or Intesa Sanpaolo, have released their quarterly results yet. Given the duration and severity of Italy’s lockdown as well as the problems that already plagued the country’s economy, they’re unlikely to be pretty.

UniCredit was the first major euro zone bank to warn that it was writing down the value of its loans to reflect the fallout of the virus crisis.

Intesa Sanpaolo is on the verge of consummating another shot-gun takeover of another Italian rival. This time the target is UBI Banca, Italy’s fifth largest bank. If the merger goes through, it will value UBI at €2.7 billion, down from €4.8 billion just over two months ago, when the offer was first announced. It will also create the euro zone’s seventh-largest banking group, which should be enough to finally propel Intesa into the top league of global systemically important banks. In other words, Europe will have another Too-Big-to-Fail monstrosity on its hands, right in the thick of yet another financial crisis!

Deutsche Bank shocked its investors on Wednesday with its darkened outlook and a loss of €43 million. CEO Christian Sewing provided some much-needed comic relief on Wednesday when he said in a televised interview, apparently with a straight face, that German banks probably won’t need to be bailed out this time around.

“We are really dealing with stable banks in Germany,” he said, adding that banks’ balance sheets had been paired down and equity capital increased since the last financial crisis. “We have more than 200 billion (euros) free liquidity reserves, that’s more than 20% of our total balance sheet, and that means for us, too, that we have to be part of the solution now, especially at this time.” Shares fell 5.3% upon the news on Thursday, to €6.78. By Nick Corbishley, for WOLF STREET.

The process of reopening Spain has been dubbed, rather ominously, “Operation New Normality.” Read… Life Under Draconian Lockdown: I Can Barely See the Light at the End of this Long, Dark Tunnel