Florida ascends to Number One as it tries to catch up. “Insured unemployment rates” already over 20% in some states as of Apr 11.

Over the six reporting weeks since mid-March, state unemployment departments have processed a gut-wrenching 30.3 million initial claims for unemployment insurance. In the week ended April 25, according to the US Department of Labor this morning, 3.84 million unemployment claims, seasonally adjusted, were processed. That was over five times the peaks during the prior unemployment crises in 1982 and 2009: 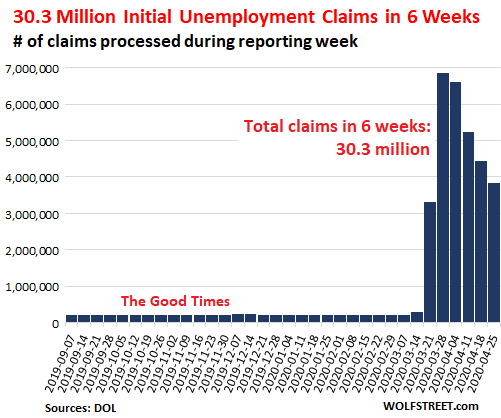 The unemployment claims reported here are those that the people were able to file and that state offices were able to process. There continue to be reports of chaos, websites that go down intermittently, jammed phone lines and infernal wait-times while on hold, etc., as still overwhelmed unemployment offices are struggling to catch up with the unprecedented tsunami of claims while trying to staff up and shift people around and train people in those tasks.

The layoff announcements by larger companies continue on a daily basis. Smaller companies are laying off people without media coverage. In addition, the provisions in the stimulus package that expand unemployment insurance to contract workers and the self-employed are still being implemented by state unemployment offices, and those claims are just now starting to show up in the data.

The number of “Insured unemployed” spikes to horrific record.

A worker who has filed an “initial claim” for Unemployment Insurance (UI) and still doesn’t have a job a week later is then added to “insured unemployment.” The number of the “insured unemployed” – or “continued claims” – skyrocketed to 18.0 million, by far the highest in the data going back to the 1960s. The record before this crisis was 6.63 million during the Great Recession in May of 2009. 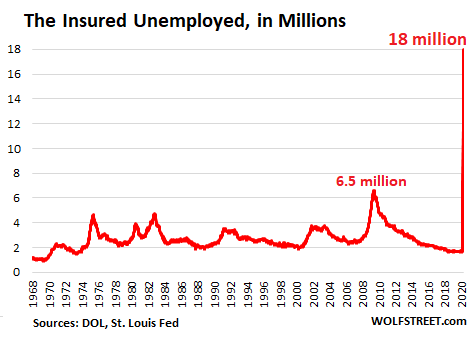 The Labor Department also reported today that for the week ended April 18, the “insured unemployment rate” soared to 12.4%, having weeks ago blown past the record of the pre-Covid-19 era of 7.0%, set in May 1975.

This “insured unemployment rate” is based on actual UI claims that were processed, and on only those claims.

It is very different from the household-survey-based unemployment rates that are released on a monthly basis in the jobs report. Those monthly unemployment rates attempt to show the percentage of people in the labor force who are actively pursuing employment, including gig work, but cannot find it. Many of these people that don’t have work but are looking for work are not covered by UI and are therefore not included in the UI data. I expect the unemployment rate in the monthly jobs report, when it catches up, to be far higher than the rate of “insured unemployment.”

The 22 states with the most initial claims, week ended April 25.

For the first week in this crisis, California is no longer the state with the most initial unemployment claims. During the initial burst in March, California had reported over 1 million claims in a single week. This has now dropped by two-thirds to a still stunning 328,042 claims.

But Florida is now in the top rank, as its overwhelmed unemployment office is beginning to sort out the chaos. The table below shows the 22 states that had the most initial claims for unemployment insurance in the week ended April 25:

This was week six of the collapse of the labor market. Most of the states reported fewer initial unemployment claims this week (ending April 25), than in the prior week, as the huge initial waves of layoffs are now abating and as state unemployment offices are catching up. This means that the number of unemployed still increased at a stunningly fast rate – and before this crisis, at an unthinkably fast rate – but at a slower rate than in prior weeks.

In addition to logistical difficulties of selling a home in the era of social distancing, there is the explosion of a historic unemployment crisis. Read... Mortgage Forbearance Balloons, Home Sales Plunge