Under a historic destruction of global demand for crude oil, ballooning supply, nearly full storage facilities, and 20 Saudi oil tankers heading to the Gulf Coast, the price of the US crude oil grade West Texas Intermediate (WTI) collapsed unceremoniously late Sunday and early Monday. While the WTI June futures contract plunged nearly 10% to $22.60, the front-month May futures contract, which expires tomorrow and is close to the WTI spot market cash price, plunged by 45% to $10.06 a barrel Monday morning, the lowest since 1999. WTI is down about 90% from mid-2014 when it traded at over $100 a barrel: 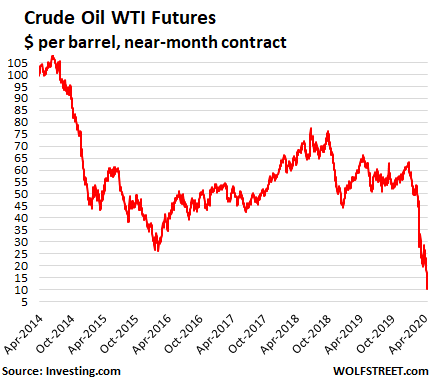 But that’s not the price shale oil drillers get at the wellhead. Wellhead prices in Texas had plunged to as low as $2 a barrel last week already, as difficulties mount trying to find storage for the oil, after demand has collapsed. There are now worries, reported by Bloomberg, that Texas producers might soon have to give away their oil – or pay traders to take it.

In a strategic move to maximize pain for the US shale oil drillers, and wipe out as many as it can, Saudi Arabia has sent a flotilla of 20 tankers carrying a combined 40 million barrels of Saudi crude oil to the US Gulf Coast to flood the US market that is already flooded with oil. The tankers are carrying about seven times as much crude as the Gulf Coast took from Saudi Aribia per month in 2019, when there was still strong demand for crude oil in the US.

These tankers with Saudi oil, which were loaded in March and early April, are plodding toward the US and are expected to arrive in Texas and Louisiana in May.

US crude oil inventories soared by 19.2 million barrels last week, from the prior week, to 504 million barrels, according to the Energy Department, and is expected to keep soaring – and now come the 40 million barrels of Saudi oil on top of it.

“This is the American energy producers’ Pearl Harbor. We know the ships are coming in, and yet nobody is doing anything about it,” Kirk Edwards, president of West Texas oil company Latigo Petroleum LLC, told the Wall Street Journal. “Every barrel they’re bringing in on those ships backs out a barrel of oil produced here in the Permian Basin.”

This Saudi move, which has caught US political attention, is confirmation that the presumed Saudi-Russia price war is all about shutting down the high-cost US shale producers that have dared to muck up the global hierarchy of dominant producers, with Saudi Arabia and Russia on top, reducing OPEC to a sideshow.

US shale oil producers have made the US the top producer in the world. Last year, the Permian Basin, where production surged, became the most productive field in the world, blowing past Saudi Arabia’s Ghawar field, at the expense of global oil prices and market share by OPEC and Russia.

The Saudi-Russia price war was an effort to shut these upstarts down – though it may not have been clear to all players at the time what they had unleashed at the eve of the historic demand destruction caused by Covid-19 lockdowns.

The effect on the targeted attack on the US shale oil sector can be seen in the global crude oil benchmark grade Brent. This morning, the Brent oil contract fell “only” 5.3% to $26.60 are barrel.

This is the first time ever that WTI trades at less than half the price of Brent. Since shale-oil production took off in the US years ago, WTI tended to trade at a discount of a few dollars to Brent, but not like this. Global crude prices have collapsed, but North American crude prices have been annihilated.

US drillers have hedged some of their production at higher prices. And so they’re not 100% exposed to this price collapse.

However, there are counterparties at the other side of these hedges, and those are getting crushed. In addition, there are oil traders that ended up on the wrong side. Top Singapore oil-trading company Hin Leong Trading Pte Ltd, which owes 22 banks nearly $4 billion, has already collapsed, amid allegations that surfaced in a court filing over the weekend that it hid $800 million in losses. And there will be others that ended up on the wrong side of this collapse, including hedge funds and many banks, whose collateral just about vanished.