By Karen Parker Feld, The Irreverent Economist at Paladin Advisors:

The Fed has used the coronavirus crisis to double down on a failed strategy of supporting financial markets while the real economy declines. Our latest Quarterly Market Outlook & Strategy letter describes the consequences that are likely to result. It’s called, “Through the Looking-Glass,” because whenever Alice (aka Karen) peers through the mirror at our financial markets, she sees that everything is reversed.  We are definitely running the Red Queen’s Race now.

Our cyclical models suggest we are, perhaps, a third of the way through the stock market’s re-pricing, although the Federal Reserve’s asset-purchase programs make any kind of market forecast hazardous. We feel most confident in saying that this is not a liquidity crisis. It most certainly is a solvency crisis, and not easily remedied.

The inexorable rise in the ratio of US debt to GDP is prima facie evidence of the unfortunate fact that most of the funds borrowed over the past few decades—by households, corporations and the government—were not put to productive use.

The Fed, like the European Central Bank, and the Bank of Japan before it, has tried to generate inflation through easy monetary policy, with the goal of reducing the real burden of our massive debts.

However, all attempts have been self-defeating, because the extra liquidity encouraged ever more unproductive borrowing, which can never be repaid.  Inflation cannot be marshaled to reduce debts in a liquidity trap; it will only arrive once these have been written down. 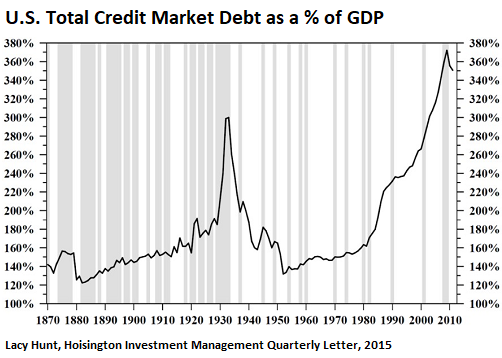 In describing our central bank, financial historian James Grant, as usual, puts it best:  The firemen are also the arsonists. Having lured investors out onto the furthest limb of the risk tree, the Fed had no choice but to play its final hand. Now that the Fed and Treasury have assumed control of the financial system, it’s hard to imagine a good (i.e., rational, efficient and transparent) mechanism through which the government will pick winners and losers via its asset purchase decisions. Whose debts will be written off, how were those beneficiaries chosen, and what evidence is there that a clean slate will catalyze  growth?

And what are taxpayers getting in exchange for their generosity? A financial system whose risks have once again been socialized, but whose rewards remain in a limited number of private hands.

The taxpayer will hold the bag for defaulted loans, but is not guaranteed an equity stake in the companies the government is bailing out. In an Irreverent Economist blog post I described the move as “nationalization” of our financial system, given the wide scope of government control. But that’s not quite right, since the public does not have ownership rights. It is better described as an organized protection racket run by banks, hedge funds, private equity investors, and large corporations.

We believe there is significant risk of cascading defaults in the form of a “debtors’ strike,” as households and businesses seek to retain whatever cash they can get their hands on. This outcome seems more likely than in 2008, which witnessed strategic defaults by some mortgagors.

The coronavirus provides a focal point around which large numbers of debtors may focus their anger and frustration at the disproportionate support given to Wall Street vs. Main Street. It’s one thing when a person feels like he or she is the only one struggling financially. But when 30% of the workforce is in the same boat, there is far less stigma associated with saying “I’m done.”

Policymakers have been repeating the same mistake for 20 years, and the reckoning has now arrived. When US captains of finance, leading politicians, sports team owners and media personalities start calling bullshit on corporate and hedge fund bailouts, you know we’re in the 9th inning of this game. Policies change when no one — not even those who benefit from them — accepts them as fair.

Whatever happens in financial markets, it is unlikely that consumer spending will rebound quickly. Americans will undoubtedly realize that they need a larger margin of safety against unexpected shocks.  Household savings will continue to rise, which will slow the recovery in the economy.  Absent a quick resolution of uncertainty surrounding the coronavirus — which we deem unlikely — businesses will be dealing with complex and difficult choices that inhibit planning and hiring decisions. Needless to say, the dismantling of global supply chains and rising geopolitical tensions will not help. By Karen Parker Feld, Paladin Advisors

Now even the fig leaf is gone. Read…  Corruption in the Time of Coronavirus