Down 15% from a year ago. Employment lags job openings by a few months. It hit the usual suspects but also the services industries, including finance & insurance, tech, and healthcare.

Let’s make this clear: these are job openings in December and prior months, before the novel coronavirus had shown up on the business-staffing horizon. Let’s also make clear that the two-month drop was so bad that a statistical flaw might have skewed the data, such as some seasonal adjustments gone berserk. But as we will see, the not-seasonally adjusted data looks even worse. And it’s not just one month. With hindsight we see that the trend started in early 2019 in small uneven drips, and it didn’t really matter until it suddenly did.

The number of job openings in December dropped by 364,000 from November (seasonally adjusted), after having already plunged by 574,000 in November, according to the Labor Department’s Job Openings and Labor Turnover Survey (JOLTS). This two-month plunge of 938,000 job openings came after a series of ups and downs with downward trend starting after the peak in January 2019. It brought the number of job openings in December to 6.42 million (seasonally adjusted), same level as in October 2017. Since the peak in January 2019, over 1.2 million job openings have dissolved into ambient air (November and December in red). 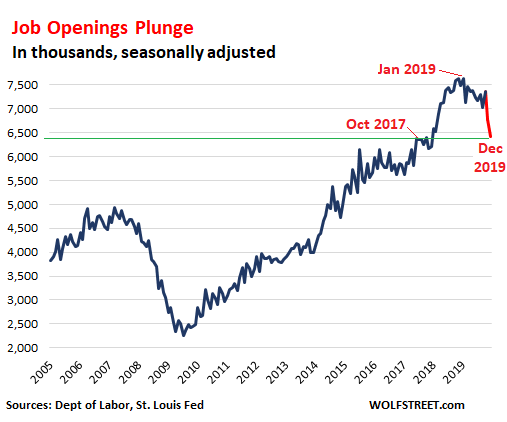 On a not-seasonally adjusted basis, job openings in December plunged by 14.9% from December 2018, the steepest since the Great Recession. In total, 1.05 million job openings have disappeared over the period. This was the seventh month in a row of year-over-year declines.

Year-over-year comparisons eliminate seasonal fluctuations. And the fact that this year-over-year drop of 14.9% in December occurred in the not-seasonally adjusted data shows that the drop to 6.42 million job openings was not due to seasonal adjustments gone berserk. It was due to other reasons. 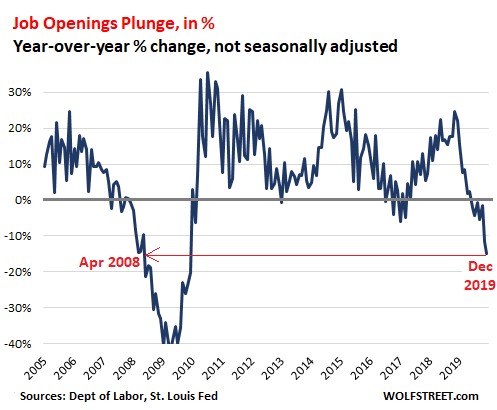 Number of quits – employees voluntarily walking out because they found something better to do – rose 2.9% year-over-year to 3.5 million but was down from a year-over-year surge in quits of 15% in January 2019, and from the peaks in 2013-2015 of 18% to 19%. Quits are a sign of confidence by employees. The rate of quits has more than doubled from the bottom of the Great Recession when people clung by their fingernails to even miserable jobs.

Number of layoffs and discharges of 1.89 million in December has been in this range since 2012.

The chart below shows total nonfarm employment (red line) compared to job openings (blue line). Note the lag during the Great Recession, with job openings beginning to trend down in early fall of 2007 while total employment started declining in February 2008: 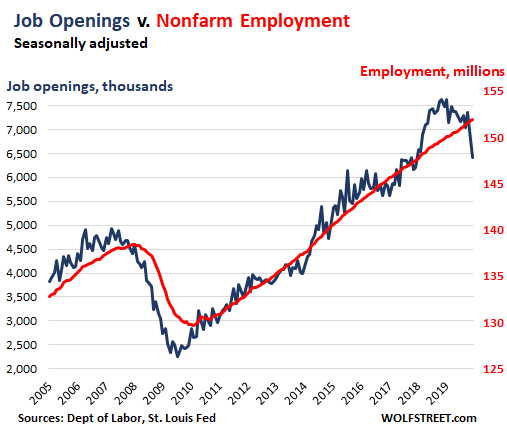 The sharp decline in job openings could just be a statistical issue that skewed the data. And we will have to see if this bears out. Or it could be that companies finally pulled all the so-called job openings that they never had had any intention of filling in the first place. And this happens, but company by company. It’s hard to imagine it would happen across the board all of a sudden to produce this kind of drop.

Or it could mean that the labor market is starting to run out of steam. And that seems to be the more likely scenario – given how widespread it was by employment category and by region.

Some of the employment categories that have seen large drops in job openings are the usual suspects in beleaguered industries that we track here: brick-and-mortar retail, manufacturing, transportation, and oil and gas drilling.

But there are now new suspects in the services industries that we have been watching like a hawk for signs of weakness because services are 70% of the US economy, and it takes a decline in services for a recession to occur. And now, job openings have dropped on a year-over-year basis in professional and business services, finance & insurance, and health care!

The year-over-year drop in the number of job openings by major category:

And the year-over-year drop in job openings by region:

The lag between the first significant declines in job openings and an actual decline in employment, where jobs are being lost, seems to be about four to six months. If this data was skewed by a statistical fluke, the drop will self-correct over the next few months. But if what we’re seeing here are the actual trends in job openings, and they don’t bounce back in a serious manner, we can expect to see declining employment a few months from now.

Another overvalued money-losing unicorn in a lo-tech ho-hum business wobbled out the IPO window and crashed. Read... Shares of Bedding Unicorn Casper Collapsed by 72% from Magical Pre-IPO Valuation

108 comments for “OK, it Gets Sticky: Job Openings Plunge the Most Since the Great Recession”