Another overvalued money-losing unicorn in a lo-tech ho-hum business wobbled out the IPO window and crashed.

Casper Sleep Inc., a money-losing cash-burning retailer of foam-mattresses, duvets, sheets, and other bedding items, had dressed itself up as some sort of magical tech company to obtain its former hyper-inflated unicorn status with a fantastical “valuation” of $1.1 billion during its last round of funding on March 27, 2019. But it has been one heck of a ride downhill from there.

At today’s closing price, Casper’s market valuation of $312 million has collapsed by 72% from that unicorn “valuation” of $1.1 billion.

Today, on their third day of trading after the IPO, Casper’s shares [CSPR] plunged 9.6% to $9.99, after having plunged 18% on Friday. On their first day of trading on Thursday, they’d initially “popped” under heavy-handed manipulation from their much-lowered IPO price of $12 a share to $15.84, only to sell off within a couple of hours. From the peak of the pop to today’s close, shares have plunged 37% in three trading days: 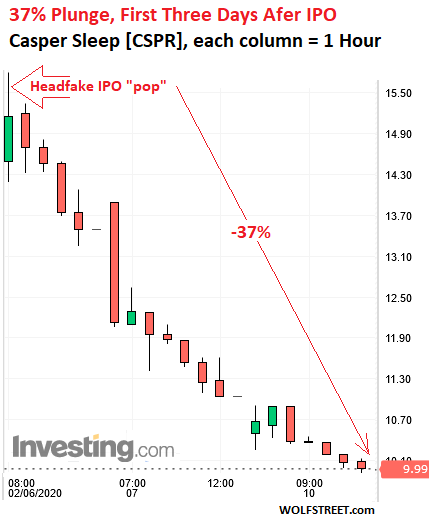 On March 27, 2019, Casper had raised $100 million. The share price that investors paid at the time reportedly gave the company a valuation of $1.1 billion, which elevated the company into the unicorn cloud, as the media oohed and aahed over this feat. It had come two days before Lyft began its long and hard post-IPO plunge.

Casper’s IPO had been misbegotten from get-go. Its amended IPO prospectus filed on January 27 was instantly picked apart by yours truly, who included a photo of its enticing “mail-order-bride” marketing approach. Casper disclosed that it wanted to offer its shares at an IPO price in the range of $17 to $19 a share. An IPO price of $18 a share would have given the company a valuation of $705 million, down 36% from the $1.1 billion valuation as unicorn.

At the time, I postulated: “The Casper IPO will test just how much appetite there still is in this market for money-losing overvalued cash-burn machines in ho-hum low-tech businesses, such as bedding.”

Turns out, not much appetite. Even this lowered price range wasn’t saleable, and so the company and underwriters set the IPO price at $12 a share last Wednesday evening. Then they worked hard to obtain that initial “pop” Thursday morning and clean out some retail investors, before everyone threw in the towel.

To make sure everyone understood that this wasn’t some kind of online ho-hum bedding retailer, competing with all ho-hum bedding retailers in the world that market their products online in the US on platforms such as Amazon or eBay, and competing with every legacy bedding and foam-mattress retailer in the US, Casper surrounded itself with the aura of being some kind of tech company with an app that would disrupt the world of bedding as we know it.

To this day, Casper has no intention of becoming profitable on a GAAP basis. And so it’s not going to happen anytime soon. But it might come up with its own metric of “profit” – à la Uber – that it hopes to achieve years down the road.

Casper is in the business of marketing, advertising, and selling mattresses, duvets, sheets, and the like, and this is a low-margin business with no barriers to entry, open to the entire world, requiring huge marketing expenses to achieve any kind of growth.

In its Prospectus, the company disclosed that revenues grew only 20% year-over-year to $312 million in the nine-month period through September 2019, but that this $53 million increase in revenues had been obtained by spending $114 million in “sales and marketing” expenses. This is the kind of business Casper is in – not some high-tech app-based disrupt-the-world foam-mattress revolution.

But it spent a gazillion dollars on its fancy and overwhelmingly cool 34,000 square-foot headquarters at 230 Park Avenue South in New York City, as is appropriate for a unicorn. Unicorns spend money. They don’t make money. That’s the deal. But investor appetite for this sort of thing, while still astoundingly robust, is clearly not as robust as it used to be.

Ever since Ford got sidetracked by its Silicon-Valley inspired “Smart Mobility” dream and blew billions on it, sales in its biggest markets have spiraled down. And not just in the US and China. Here are the ugly charts by market. Read… Ford Better Figure Out How to Sell Vehicles, And I Mean Globally & Pronto, Before it’s Too Late