Asking rents for ground-floor retail space have plunged as landlords struggle with vacancies.

These are major shopping corridors in Manhattan, and in nearly all of them, asking rents for ground-floor retail space have been dropping for years – and in some of them by half.

For example, the average asking rent on Madison Avenue between 57th Street and 72nd Street, plunged 22% in the second half of 2019, compared to the same period last year, to $906 per square foot per year, and is down 47% from the first half in 2015, according to the bi-annual Manhattan Retail Report released today by the Real Estate Board of New York: 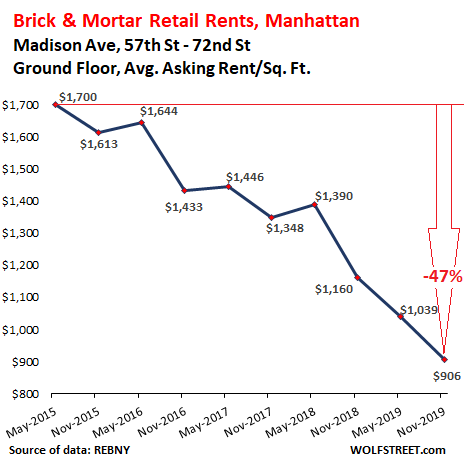 The REBNY report points out, “An increased amount of leases expiring has contributed to the high availability rates [meaning, vacancies] that has led owners to lower asking rents and offer more short-term lease agreements.”

The report is entirely focused on ground-floor retail spaces. Of the 17 shopping corridors in Manhattan tracked by the REBNY, average asking rents fell in 11 of them. But since 2015, asking rents in all but three of them have dropped sharply. But two of those three have reached new highs (and we’ll get to them in a moment):

On Third Avenue, between 60th and 72nd Street, according to the report: “In order to fill vacant spaces, owners are becoming more flexible with a steady amount of deal-making occurring with new tenants such as Wells Fargo, TD Bank, and Tudor Salon.” Alas, those three operations are services, two of them financial services, which are booming, not retail (sale of goods to consumers): 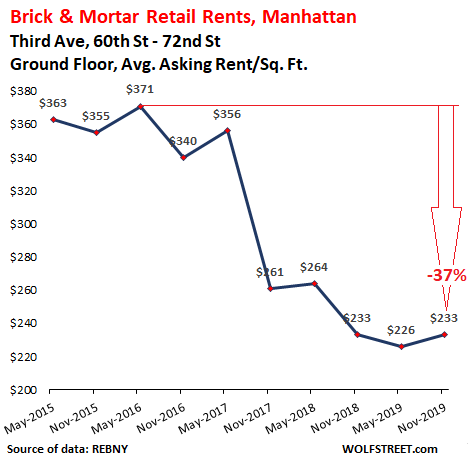 On East 86th Street, between Lexington Avenue and Second Avenue, the average asking rent fell 11% year-over-year adding a big portion to the decline since the first half in 2015: 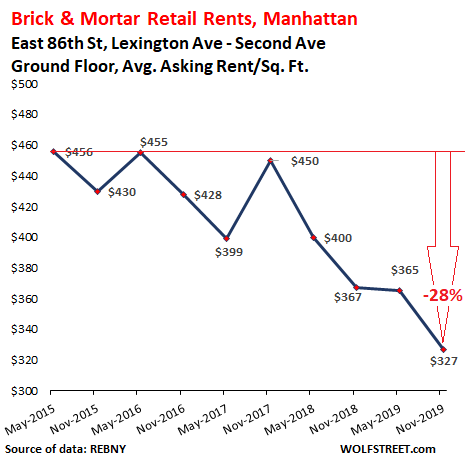 Some of Manhattan’s most expensive shopping corridors are in Midtown, but they have not been spared. 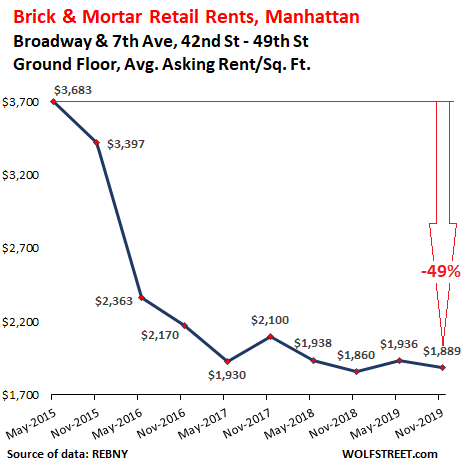 And the two stretches on Fifth Avenue, between 42nd Street and 59th Street: 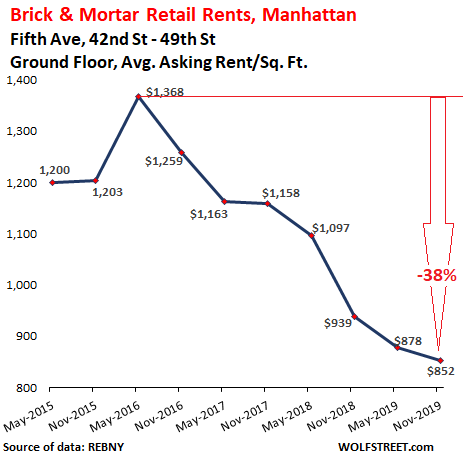 These are asking rents. It doesn’t mean that tenants agree to them. In the second half of 2017 and the first half of 2018, valiant but futile attempts were made on Fifth Avenue between 49th Street and 59th Street to ignore reality and ask for record rents, but apparently that didn’t work out, and aspirations then got slashed by 28% in two years: 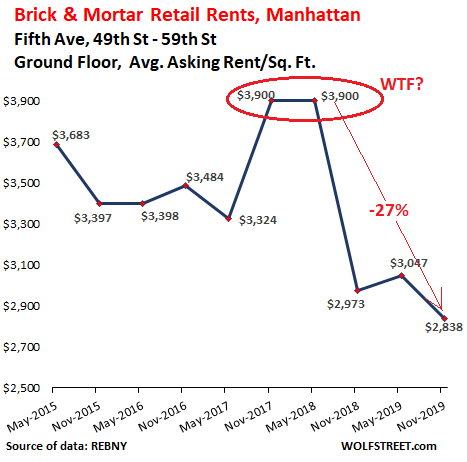 Asking rents for ground-floor retail space along West 34th Street between Fifth Avenue and Seventh Avenue are among the worst-hit in Manhattan in terms of the plunge since the first half of 2015: 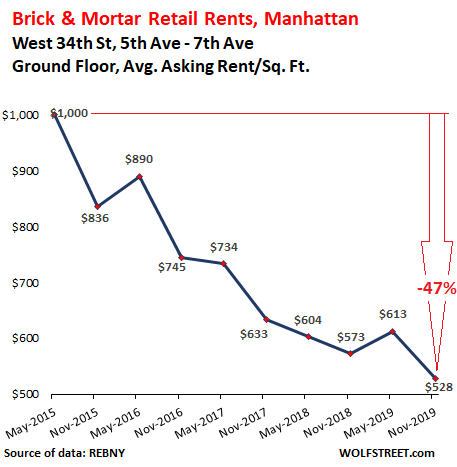 Concerning the 50% plunge since 2015 in SoHo on Broadway, between Houston Street and Broome Street (chart below), REBNY reported:

Broadway is composed of loft buildings with large retail spaces that are difficult to subdivide due to historic regulations. Further complications stem from restrictive zoning that places limits on food/beverage uses in SoHo. 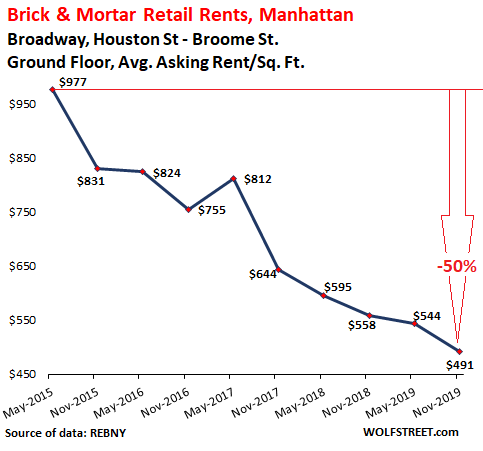 Concerning the 46% plunge in asking rents on Bleecker Street (chart below), REBNY explains:

Bleecker Street has gained new traction with Brookfield Properties filling in its new portfolio of 7 storefronts with a mix of digitally native and e-commerce brands, which has encouraged similar retailers to search for space along the corridor. Examples of new digitally native and e-commerce tenants include LoveShackFancy, Hill House Home, Slightly Alabama, and Bonberi. 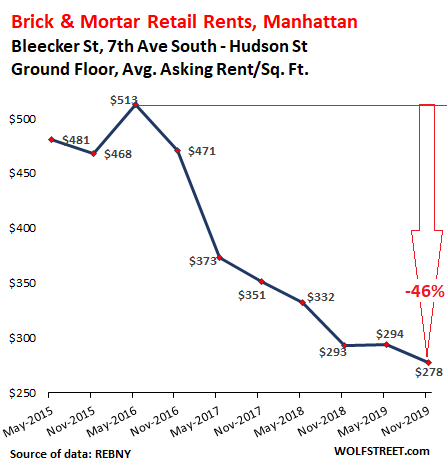 But in terms of asking rents, not every retail corridor in Downtown is going to heck. This is one of the two above mentioned exceptions of the 17 corridors tracked by REBNY where average asking rents for ground-floor retail space has skyrocketed since 2015 to an all-time high: 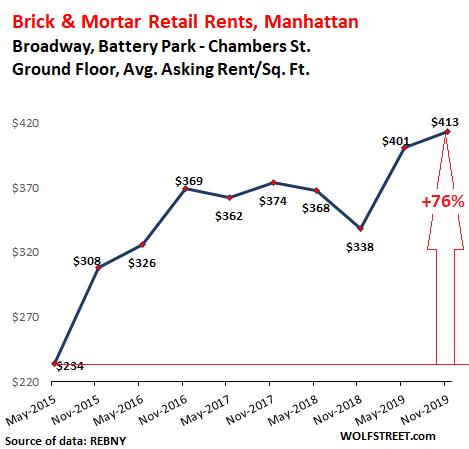 And still Downtown, a surprise jump that leaves some interesting question marks: 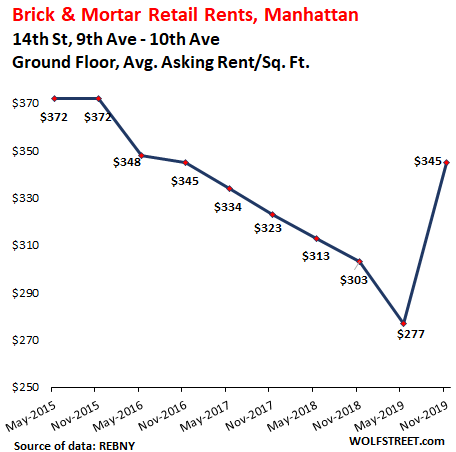 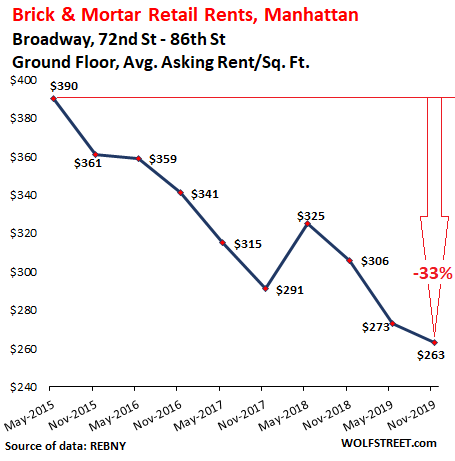 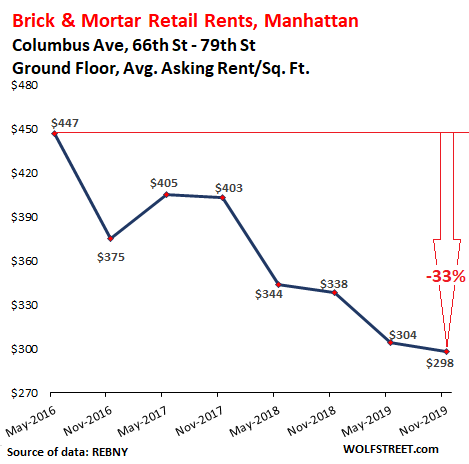 And here is the other exception, the shopping corridor along 125th Street in Harlem, from the Hudson River to the Harlem River (not a river but channel) where average asking rents for ground-floor retail space started to turn around in 2017 and have risen 23% since then: 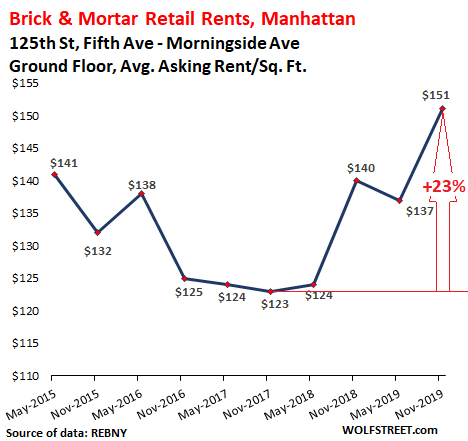 And everyone is trying to figure out how to make this retail space work and fit into modern life where ecommerce is becoming an increasingly powerful force. REBNY outlines some of those initiatives, with a big emphasis on moving away from retail sales and into services, such as cafe’s and restaurants, financial services, health care, or personal care:

Eventually, rents drop far enough and lease terms are flexible enough to where potential tenants can figure out how to make this space work for them. That moment may have arrived in Harlem and in a few other corridors, but the rest are still struggling to find it.

Department stores and mall stores get crushed one by one. Read…  Brick & Mortar Melts Down as Ecommerce Jumps by Most Ever