WeWork was just late to the defenestration party.

Everyone – including infamously me – has been trying to pinpoint the exact moment when the magnificent startup-unicorn-bubble broke, and I mean not just broke but imploded spectacularly. All of the biggest upcoming IPOs were cancelled. All the biggest ones that got out the IPO window this year crashed and burned. And the $47-billion WeWork unicorn is now awaiting dismemberment or a bailout from Softbank after its IPO hopes were annihilated by a catastrophic event, called “market conditions,” when some sort of rationality starts to reinsert itself in tiny baby steps into the market.

WeWork is the current favorite for pinpointing when, who, and what blew up the IPO market that is so crucial for the startup-unicorn scheme to function and to come to its completion. Former Nasdaq CEO Robert Greifeld explained in an article published on CNBC this morning:

WeWork’s aborted IPO may come to mark the end of the current “unicorn” bubble the way the scuttled merger between Yahoo and eBay signaled the start of the dotcom crash in 2000.

Having become CEO of Nasdaq in 2003, I saw up close the damage caused by the growth-over-profits philosophy in that earlier era, and WeWork’s spectacular fall – from the year’s most anticipated IPO to a company with a speculative-level credit rating that may run out of funds within a year – rings many bells.

Yes, I’m totally with you, Mr. Greifeld. You nailed it. It’s obvious now to everyone. Everyone can see today what we’ve lambasted for years. And now everyone is trying to figure out the moment it started to implode.

But I don’t think WeWork did it. It crapped out on us because the bubble was already imploding, and WeWork had simply failed to get out the IPO window in time while it was still open earlier this year.

Lyft got out in time and crushed stock market jockeys.

I suspected something was off when Lyft’s shares, in first-day trading on March 29, plunged 10% in four hours after their initial “pop” to $88.66 a share. The first highly anticipated mega-IPO in 2019 had crapped out. Today, shares are trading at $38.70, down 56% from the IPO “pop” (stock data via YCharts): 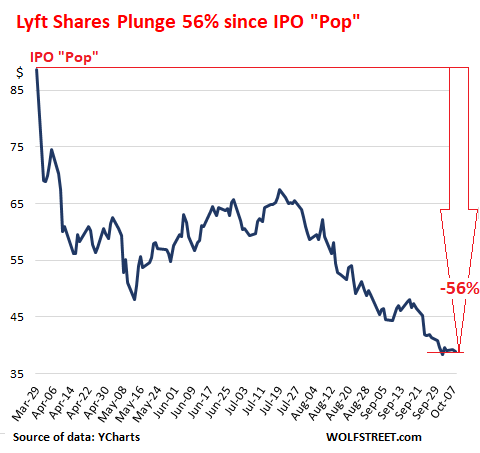 Uber got out in time and crushed stock market jockeys.

At its last round of funding before the IPO, Uber was “valued” at $76 billion. There were hopes of a $120 billion IPO. Appetite waned as Lyft shares got crushed and as Uber disclosed that it had lost $10 billion in the past three years. The “rumored” IPO price started coming down. Uber went public on May 10 at $45 a share, with a valuation of $82 billion.

After the lowered IPO price, Uber shares fell out of the gate. Then dip buyers stepped in, and shares meandered higher – until they plunged. Shares are currently trading at $29.61, down 37% from their peak, and down 34% from the IPO price of $45. Market cap is a still inexplicably humongous $50 billion (stock data via YCharts): 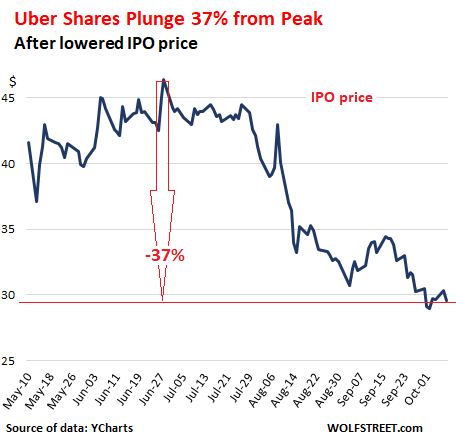 Many other mega-IPOs got out and crushed stock market jockeys.

There were many other overhyped cash-burn machines with gigantic valuations that crashed and burned sometime after their IPO, before the WeWork IPO hopes collapsed. I went through some of them in my podcast, in reverse chronology:

On June 10, I infamously pinned peak-insanity of the startup-unicorn bubble on the precise hour: 9:59 AM Eastern Time on that Monday.

This was the moment when the shares of Beyond Meat had skyrocketed 34% in minutes to hit for a moment $186.43, after having skyrocketed 39% on Friday. In less than two weeks since the IPO, shares had soared by 645%, giving this outfit a market capitalization of about $11 billion, though it’s just a small maker of fake-meat hamburgers and hotdogs.

This kind of stuff is a dead-give-away that market insanity has reached a peak.

But I was wrong. 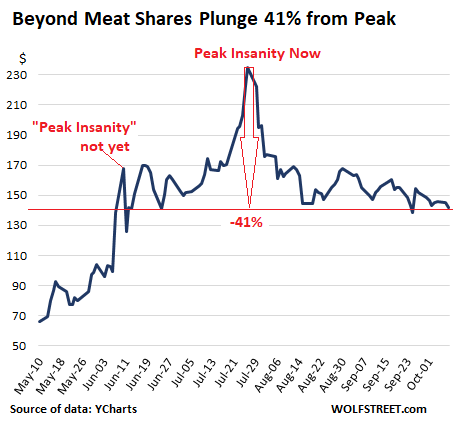 So I was wrong. The moment of “peak-insanity now,” after which all this stuff implodes, wasn’t June 10 after all. If Beyond Meat is the measure – and in my book it is because it’s a minuscule company that sells fake meat burgers and hot dogs in a crowded market that has been around for a long time and has no barriers to entry – so with this stock as the measure, July 26 was the moment of “peak-insanity now.”

But it was foreshadowed by the Lyft and Uber fiascos, and it was after-shadowed, so to speak, by the mega-IPOs that got out the IPO window but have since crashed and burned.

WeWork was just late to the defenestration party. By the time it arrived to jump out the IPO window and crush stock market jockeys, the unicorn-startup bubble was already imploding, and it never made it out the window – and at least in this case, a massive wealth transfer was stopped in its tracks.

99 comments for “When Was Peak-Insanity of the Unicorn-Startup Bubble That’s Now Imploding?”