Vancouver sags. Calgary, Edmonton down from many years ago. Toronto rises but below 2017 peak. Montreal, Ottawa at new highs.

July is seasonally a strong month in the Canadian housing market, as tracked by the Teranet–National Bank National House Price Index. Over the past 21 years, the composite index for the metros has risen on average 1% from June to July due to seasonal pressures. This year it only rose 0.7%. On a seasonally adjusted basis, the composite index declined in July by 0.1%, after having declined 0.5% in June, and 0.4% in May – “pulled down by the three largest markets of Western Canada,” the report points out, particularly by Vancouver.

Normally, July is red-hot for Vancouver house prices. In July 2017, for example, the Teranet–National Bank National House Price Index for Greater Vancouver surged 2.8% from June. But not this year. This July, house prices fell 1%, the 12th month-to-month decline in a row. Vancouver was once one of the most splendid housing bubbles in the world, with house prices having more than quadrupled in 16 years. But the Vancouver housing bubble is deflating. The July drop left the index down 6.2% from July last year, the steepest year-over-year decline since July 2009: 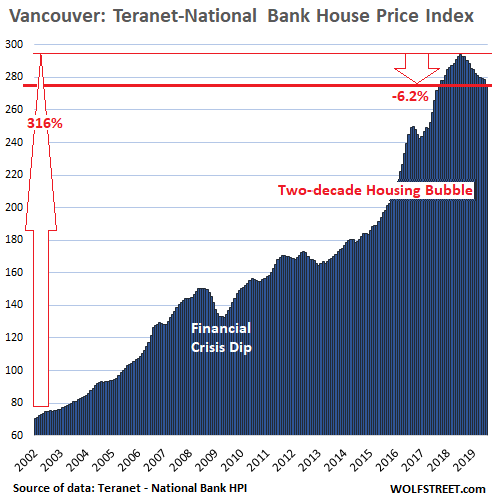 The Teranet-National Bank House Price Index tracks single-family house prices, based on “sales pairs,” comparing the price of a house that sold in the current month to the price of the same house when it sold previously, often years earlier.

This produces a kinder-gentler and delayed version of the already kind-and-gentle official MLS House Price Index, which is based on a “typical” house with a “benchmark” price. This MLS HPI benchmark price for Vancouver fell to C$1.417 million in July, down 12% from July 2017, and is back where it had first been in April 2016 (chart via stevesaretsky.com): 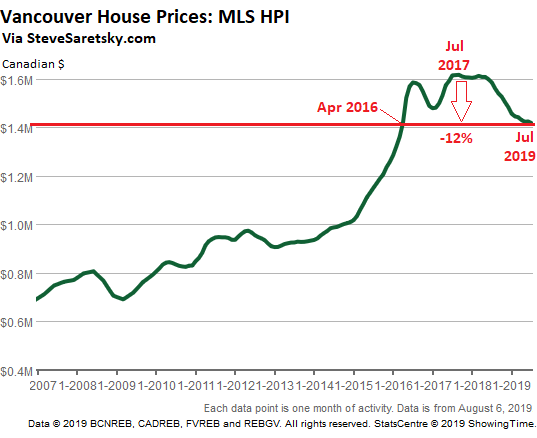 House prices had more than tripled in the Greater Toronto Area (GTA) from January 2002 through the peak in July 2017, with the index skyrocketing 218% — a huge increase in 15 years but just a pale imitation of Vancouver’s 316% increase.

In July, house prices in the GTA rose 1.3% from June, according to the Teranet-National Bank House Price Index, and were up 3.2% from July last year. This leaves the index down 0.9% from the peak in July 2017.

The charts on this list are on the same scale as Vancouver’s chart to show in relative terms how big the house price increases were in each metro. So, Toronto’s chart shows quite a bit more white-space than Vancouver’s: 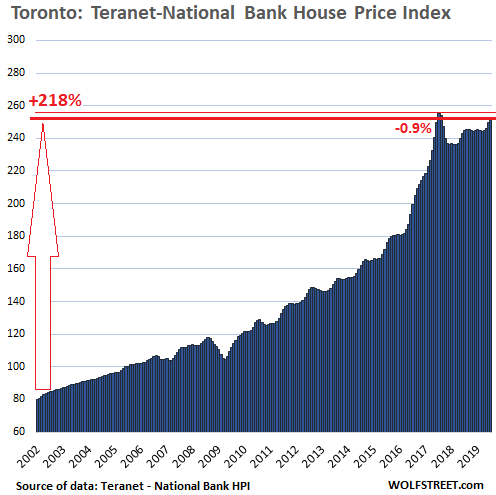 The house price changes, as tracked by “sales pairs,” is based on how the price of the same house changes over time. The index tracks how many more Canadian dollars it takes to buy the same house over time. A price increase of the same house is a measure of how much purchasing power the currency has lost with regards to houses. If the price of a house doubles over a number of years, it means the currency has lost half its purchasing power with regards to houses. This makes this index (and similar indices, such as CoreLogic Case-Shiller Home Price Index in the US) a measure of house price inflation.

House prices in Victoria – having more than tripled between January 2002 and September 2018 – ticked up 0.6% in July from June, and was also 0.6% ahead of where it had been in July last year. The index and is about flat with the peak in September 2018 (chart is on the same scale as Vancouver’s): 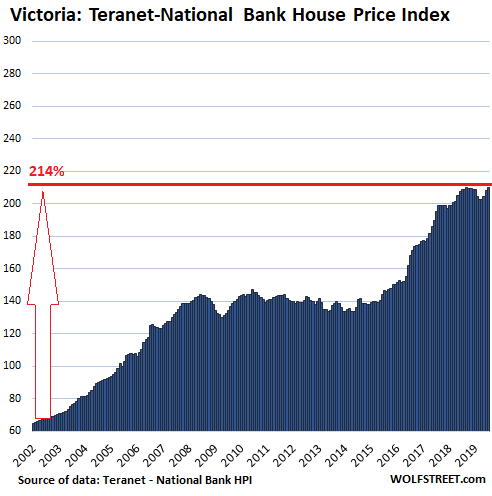 House prices in the Winnipeg metro jumped 2.9% in July from June. But on a year-over-year basis, the index inched up only 0.5%, and remained down 0.8% from the peak in September 2018. The index had nearly tripled between January 2002 and September 2014. But then prices stalled. In July, even after that 2.9% one-month jump, the index was only 5.5% higher than it had been in September 2014: 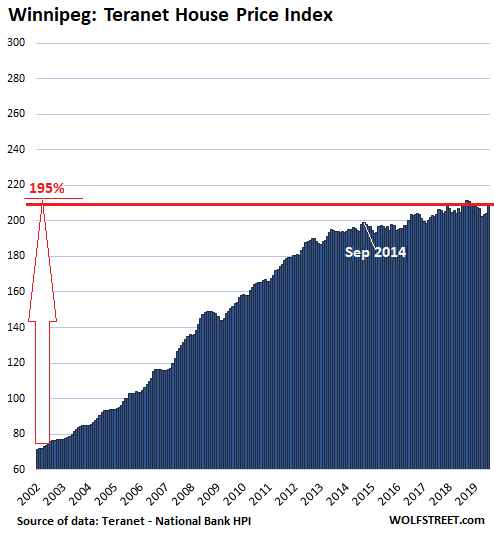 In the Quebec City metro, house prices were flat in July compared to June and were up 1.0% from July last year, having been flat for the past seven months. Since July 2013, the index has ticked up 2.8% — essentially flat for six years, a sort of a hangover following the blistering 160% gain in the prior 12 years: 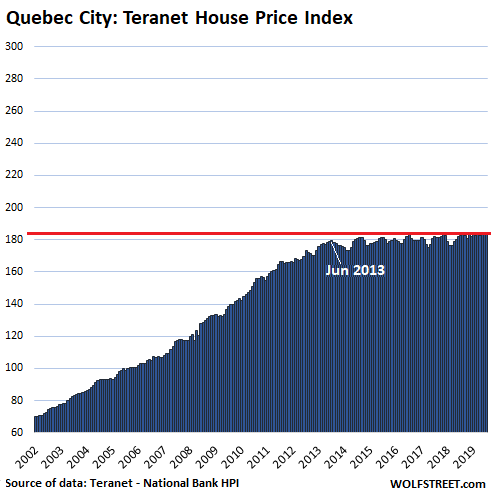 House prices in Montreal jumped 1.7% in July from June to a new record. The index has risen 167% over the past 16 years, blowing right past the Financial Crisis. But that was only about half of Vancouver’s crazy 316% price gain over the same period (chart on same scale as Vancouver’s):

In Edmonton, house prices ticked up a smidgen in July but were down 2.8% from July last year and were down 5.8% from October 2007: 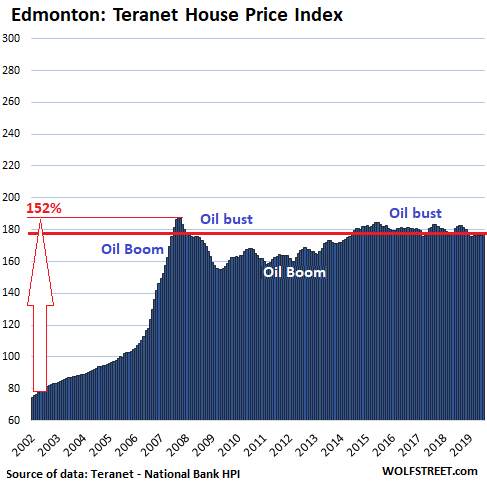 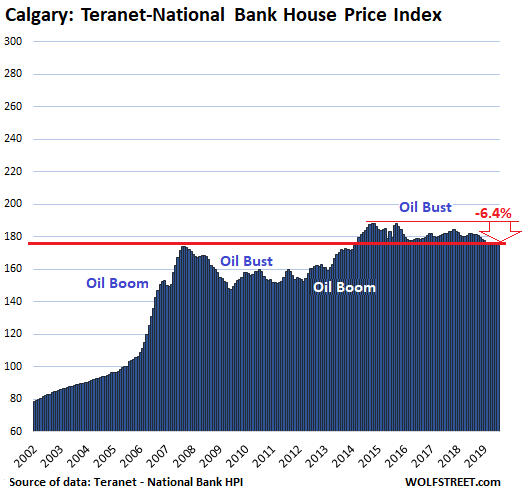 House prices in Ottawa rose 2.0% in July from June to a new record, and are up 6.0% from July last year. Since January 2002, the House Price Index has risen 116%, meaning that it has doubled in 17 years, but given the splendid nature of the other housing bubbles in Canada, Ottawa occupies the lowest place in terms of price gains since 2002: 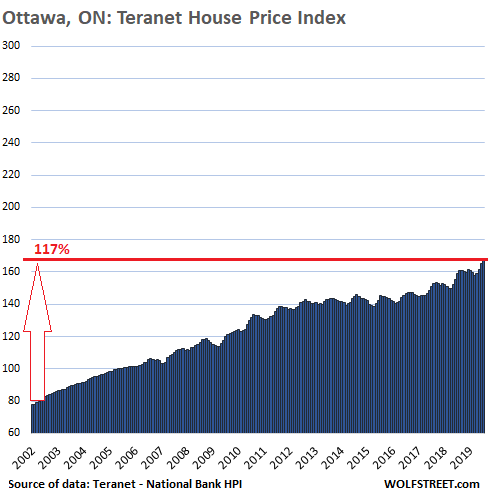