The bifurcation among consumers.

Consumer credit – auto loans, student loans, and revolving credit such as credit card balances and personal loans, but not housing-related debt such as mortgages and HELOCs – grew 5.4%, or by $208 billion, in the second quarter compared to a year ago, to a new record of $4.06 trillion (not seasonally adjusted), according to the Federal Reserve this afternoon. 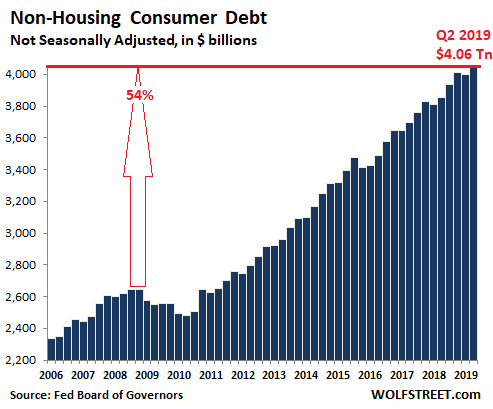 Every dime of that additional $60 billion that consumers borrowed in Q2 – and of the additional $208 billion they borrowed over the past 12 months – was spent and became part of the $14.5 trillion in annualized consumer spending, nudging it up by about 1.4%. Consumer spending accounts for nearly 70% of the economy, as measured by GDP. Everyone and everything depend on these consumers to consume, which is their function. That’s why they’re called “consumers,” and not “people.”

In the chart above, note the sharp and relentless increase since the bottom of the Financial Crisis. Since 2010, consumer credit balances have surged 60%. And since the peak before the Financial crisis in 2008, they have surged 54%. So how did this happen and what does this mean for the American debt slaves?

Outstanding balances on credit cards and other revolving credit, such as personal lines of credit, rose 4.8% in Q2 compared to Q2 last year, to $1.03 trillion (not seasonally adjusted). This was a record for a second quarter, and was below only the holiday shop-and-borrow season, Q4 2018: 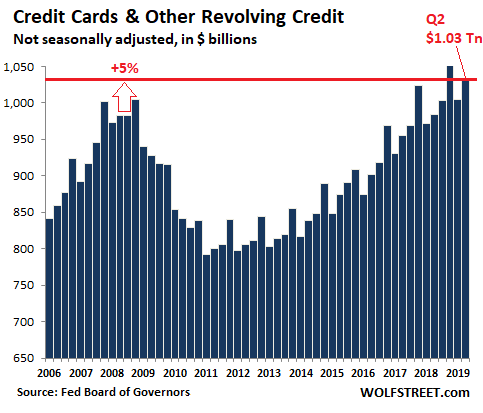 As laudatory as these efforts may seem on first sight, consumers have actually been fairly lackadaisical with their credit cards. Since the prior peak just before the Financial Crisis in Q2 2008, so in 11 years, credit card balances have edged up only 5%.

Over the same period, the Consumer Price Index rose 17% and the US population rose about 8%. So adjusted for inflation and per-capita, American consumers have shed credit card debt.

In reality, there is a bifurcation.

Many consumers pay off their credit cards on a monthly basis without sweat and use them only as a payment device and to gain loyalty awards. They don’t carry balances on their credit cards, and they don’t pay credit card interest. Their credit-card activities are not reflected here.

Then there are the tapped-out consumers with multiple maxed-out credit cards, or with credit cards with large balances, and consumers with personal loans, payday loans, etc. And they’re paying a fortune in interest at double-digit rates because they don’t have the money to pay off those loans. They can barely make the minimum payments and get to the next paycheck.

Total auto loans and leases outstanding for new and used vehicles in Q2 rose by 4.0% from a year ago, or by $45.6 billion, to a record of $1.17 trillion, despite new-vehicle sales that declined by 1.5% in the same quarter, and despite lackluster used-vehicles sales. This 4.0% increase in auto loans is the consequence of higher transaction prices of new and used vehicles, an average loan-to-value ratio that continues to tick up, and the lengthening average duration of loans: 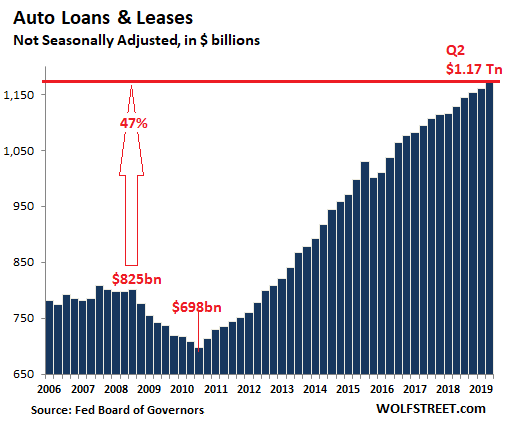 Since 2008, auto loan balances have surged 47%, compared to the increase in the Consumer Price Index of 17% and population growth of 8%. So, on an inflation-adjusted per-capita basis, the burden of these loans has increased. But in terms of the size of the overall economy, auto-loan balances have remained at about 5.5% of GDP.

The bifurcation of consumers is not so straightforward with auto loans. Auto loans here include leases. Many people, including wealthy people, lease a vehicle not because they lack the moolah to pay cash for it but because leasing brings real and perceived advantages. Even buying a new vehicle with a subsidized loan can be an advantage for people with cash to burn.

But there too is a bifurcation of consumers – the subprime end.

Subprime auto loans account for about 21% of total auto-loan originations this year. Delinquencies started ballooning in 2015. By 2018, subprime auto-loan delinquencies — as measured by Fitch Ratings, which tracks subprime-auto-loan-backed securities — were exceeding the levels during the peak of the Financial Crisis and were back where they’d been in the mid-1990s during the subprime auto-loan bust. Some smaller lenders specializing in subprime auto loans collapsed last year. Lenders have started to tighten up their standards. And delinquency rates have stabilized over the past year at very high levels. The low and falling delinquency rate for “prime” borrowers (blue line) illustrates the bifurcation: 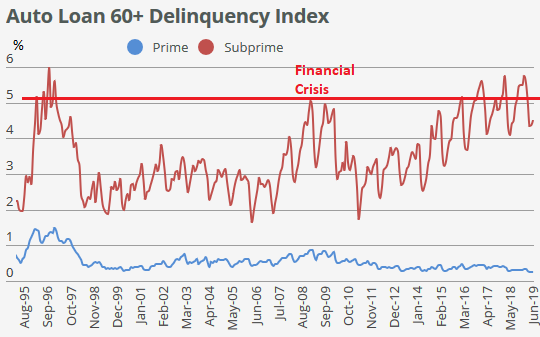 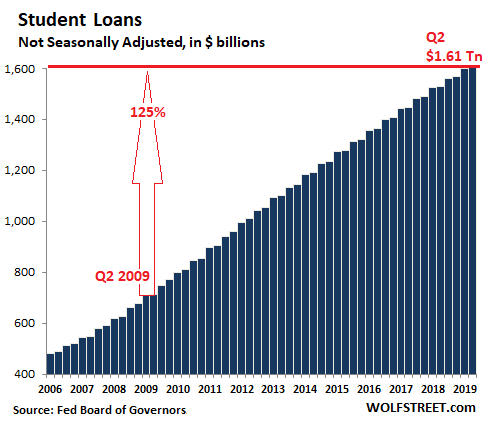 But that surge in student loan balances is not because there are more students enrolled. On the contrary: According to the latest data available from the National Center for Education Statistics, enrollment fell by 7% between 2010 and 2017, from 18.1 million students to 16.8 million students.

So who got this $1.6 trillion that students now owe and that the taxpayer guarantees? Students are just the conduit for this money. Who ends up with it? Universities; Apple and other companies, such as textbook publishers, that focus on selling their goods and services to students; other participants in the economy such as grocery stores and concert venues; and importantly, investors in a booming asset class called “student housing.” They are the recipients of these taxpayer guaranteed funds. And every dime of this debt contributes to the economy as measured by GDP – on the time-honored principle of Apocalypse not now.

In the most expensive US markets, apartment rents hit a ceiling, in some cases years ago, and have dropped since. That this wasn’t a brief fluke is increasingly apparent. But rents in 10 other cities surged by 10% to 15%. Here’s how rents have changed in the top 100 markets. Read…  Hottest, Most Expensive Rental Markets Unwind