The Chart of Carmageddon.

Prices of used vehicle that were sold in May at wholesale auctions rose 4.0% compared to May last year, according to Manheim, the largest auto-auction house in the US, running about 8 million vehicles through its venues a year. The chart of the Manheim Used Vehicle Value Index, which is adjusted for mix, mileage, and seasonality, shows the two price surges from end of March 2017 and March 2018 that were subsequently only partially unwound. And the 2019 selling season is beginning likewise: 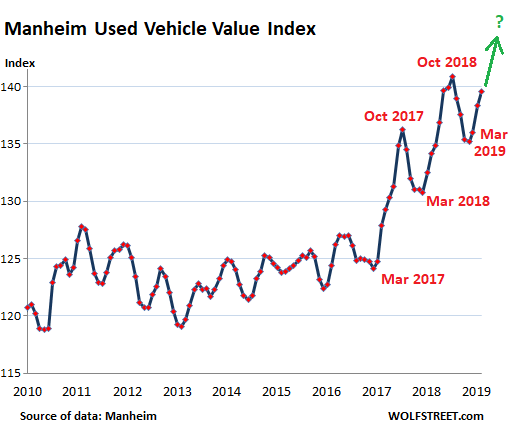 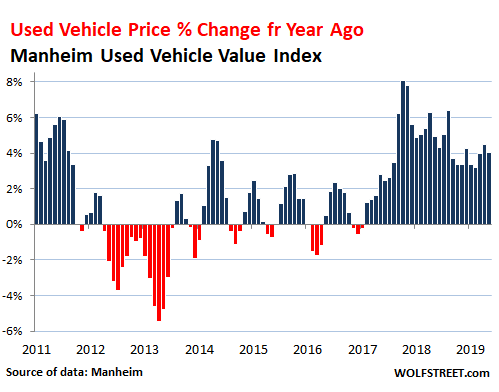 The last time there was such an extended period of year-over-year price gains was from the trough of the Financial Crisis. After prices had collapsed in 2008, they started bouncing off sharply in January 2009.

By the time the “Cash for Clunkers” program started officially on July 1, 2009, used vehicle prices had already recovered to their prior pre-crisis levels (see chart below). But “cash for clunkers” boosted prices further. Congress had appropriated $1 billion that was supposed to last through November. But by July 30, it was gone. Congress appropriated another $2 billion, which was soon gone too.

Car buyers were handed this $3 billion to trade in their “clunkers” and buy a new vehicle. Cash for clunkers was designed to boost new-vehicle sales. The engines of these trade-ins under the program were destroyed and the vehicle was then towed to the salvage yard for parts.

As a side effect, the program destroyed a portion of the most affordable vehicles – another devastating blow to lower-income car buyers in subsequent years. Not only were the most affordable vehicles gone; but by removing this supply from the market, Cash for Clunkers caused the prices up the entire scale of used cars to surge. This included my three-year-old car. Its book value rose month after month, even as the car got older and accumulated miles, something I’d never seen before, and I’d spent many years in the car business.

This effect shows up in the Manheim Used Vehicle Value Index between mid-2009 and mid-2011. The effect started to unwind but never quite got back on trend. Then starting in 2017, we got more price surges: 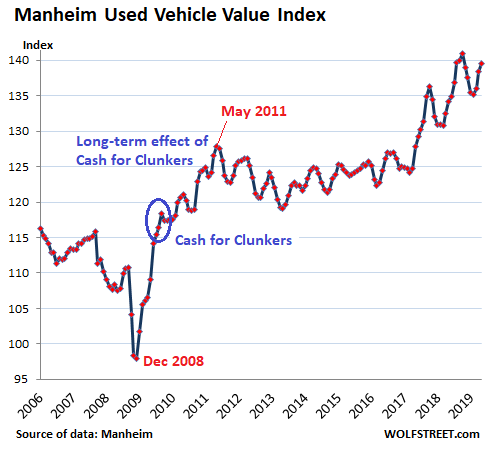 Last month, all major vehicle categories had year-over-year price gains except vans, according to Manheim. But midsize cars, hot as used vehicles, had the biggest price increases at 6.5% year-over-year, ahead of pickups, which are the hottest thing on the new-vehicle side: 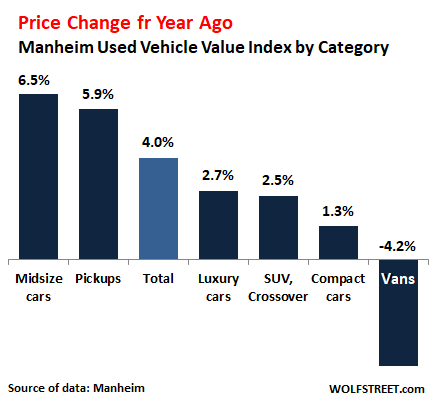 But on the new vehicle side of a dealership, cars are dead. They’re a big force behind what I call Carmageddon. New car sales have been getting crushed since 2014, while sales of “trucks” – pickups, SUVs, crossovers, and vans – have become red-hot. Carmageddon is now in its fifth year. From 2014 through 2018, industry-wide new-car sales have plunged nearly 30% to just 5.5 million units while new “truck” sales have soared 38% to 11.8 million units.

For 2019, new car sales will likely drop to about 4.8 million units and new truck sales – pickups, SUVs, crossovers, and vans – will rise to around 12.4 million units, according to my own estimates based on current numbers: 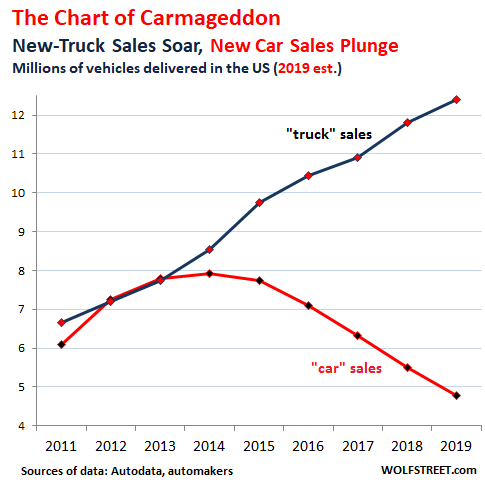 American consumers seem to fall into two categories: Those that cannot afford new midsized cars are buying them for a fraction of the cost as used cars; and those who can afford them pay some extra to buy new pickups, SUVs, crossovers, and vans.

Wall Street is not complaining about this part of the shift: Profit margins on trucks are huge because Americans are willing to pay a lot extra for large vehicles, even if the cost to the automaker is nearly the same, while profit margins on lower-end cars – not luxury cars – are very tight.  It’s getting to the point where automakers are abandoning the classic sales distinctions of “cars” and “trucks” because they no longer really make sense.

But as used vehicles, cars are doing very well – at a fraction of the cost. Many of these used cars are former rental cars that dealers buy at auctions around the country.

And the price surge in used vehicles, as seen in the charts above, also shows up in the average loan amounts taken out per financed used vehicle.  According to Federal Reserve data, the average amount of a used car loan taken out in Q4 2018 (latest data available) jumped 5% year-over-year to $18,431 per used vehicle financed: 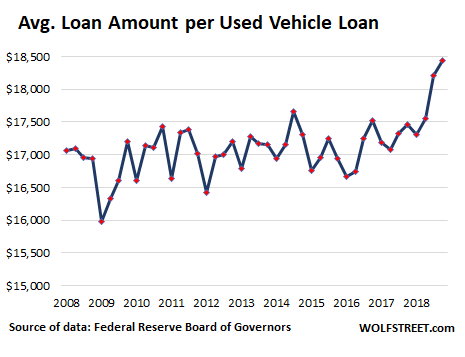 And average loan terms for used vehicles have been rising for years, as dealers and finance companies are trying to put deals together that consumers can’t afford otherwise, despite historically low interest rates. According to the latest data from the Federal Reserve Board of Governors, the average length of used car loans originated in Q4 has risen to a record 62.2 months: 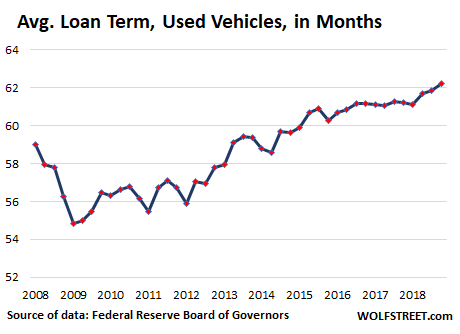 The Manheim auction data used in the first three charts above describes pricing in the wholesale market. But the retail market is far broader. It includes person-to-person sales of used vehicles, and dealer retail sales of used vehicles. This market has an estimated sales volume of about 40 million vehicles per year – compared to the new vehicle market of around 17 million vehicles a year.

In terms of new vehicles, Cox estimates that sales fell 0.5% to a seasonally adjusted annual rate of 17.3 million vehicles, with car sales plunging 12% year-over-year, in line with Carmageddon; and “truck” sales – pickups, SUVs, crossovers, and vans – rising a weak 5%.

These fleet sales eventually supply the used vehicle market as rental-car companies and commercial fleets cycle through their vehicles by selling them at auction, or as is the case with some rental fleets, by selling them directly to retail customers. And many of these units are cars, and they’ll be a lot more affordable when they sit on dealer lots as used vehicles than as new vehicles.

“When times are tough, the thinking switches to the short-term. Many fleets are just fighting for survival.” Read…   What Collapsing Orders for Heavy Trucks – Down 71% from a Year Ago – Say about the U-Turn in Trucking