US housing markets are intensely local, each following its own dynamics, and with mind-boggling differences, both in prices and price movements. This is amply illustrated by the  CoreLogic Case-Shiller Home Price Index for 20 metros, released on Tuesday. I detailed the markets that are deep into Housing Bubble 2 – though some have now hit a ceiling – in The Most Splendid Housing Bubbles in America: First Year-Over-Year Drops Since Housing Bust 1. And here is the other batch of metros, those that range from still crushed markets to budding bubbles that haven’t quite yet qualified for the list of the Most Splendid Housing Bubbles.

The Dallas-Fort Worth metro largely missed Housing Bubble 1, to the aggravation of homeowners and speculators who could not figure out why home prices were skyrocketing nearly everywhere else. And they were spared Housing Bust 1. But these years of the doldrums were followed by years of party time, with home prices surging relentlessly until mid-2018. Since then, price increases have slowed to a crawl. The Case Shiller index rose 0.6% in April from March, to a new record, but that was less than the seasonal increase in April last year, and the gain for the 12-month period was whittled down to 2.7%, the slowest year-over-year gain since March 2012: 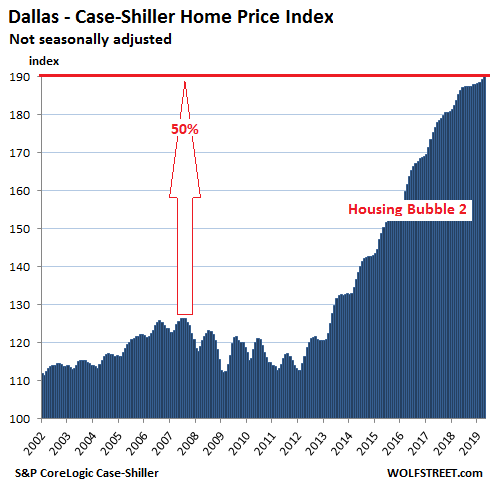 The Core-Logic Case Shiller Home Price Index is a rolling three-month average; the current release tracks closings of home sales that were registered in public records during February, March, and April. Its methodology is based on “sales pairs,” comparing the sales price of a house in the current month to the prior transaction of the same house.

Single-family house prices in the Chicago metro, one of the largest housing markets in the US, rose 1.2% in April from March, about in line with the seasonal uptick in April last year, for a 1.9% gain for the 12-month period, according to the Core-Logic Case-Shiller Home Price Index. But prices remain 14.4% below the crazy highs in September 2006 at the peak of Housing Bubble 1, which was followed by Chicago’s harsh Housing Bust 1: 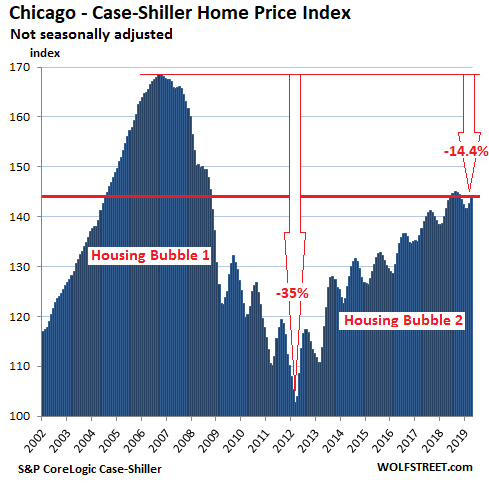 Condo prices in the Chicago metro plunged 40% during Housing Bust 1, according to the Case Shiller index, but then surged with large seasonal fluctuations. However, in recent months, the surge has slowed. In April, condo prices rose 1.6% compared to March, but that was slower than the seasonal rise in April 2018, and the year-over-year gain, which has been shrinking in recent months, shrank further to just 1.6%: 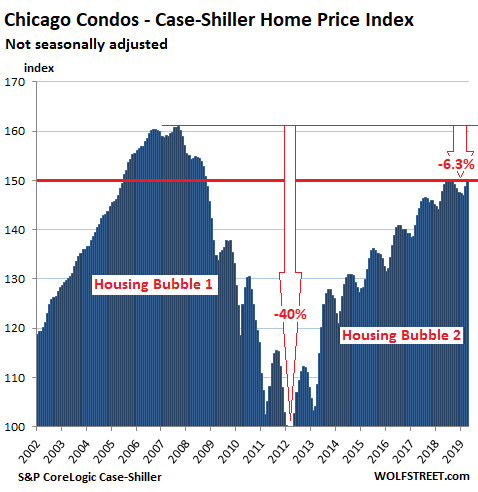 The charts here are on the same scale – except for the Dallas-Fort Worth metro, whose price surges have ballooned past that upper limit. On the charts for Chicago and all charts below, the vertical axis ranges from 100 to 175. This fits Chicago’s Housing Bubble 1. A value of 150, as is the case with Chicago condos, means that prices have risen 50% since January 2000 (for which the index was set at 100). This shows remaining metros on this list in the same light – and with chilling effect for Detroit and Cleveland.

In the Minneapolis metro, house prices rose 1.0% in April from March, also more slowly than the seasonal gain in April last year. This reduced the year-over-year gain to 3.0%. The Case Shiller index is 1.8% above the Housing Bubble 1 peak. Note that this chart is on the same scale as Chicago’s: 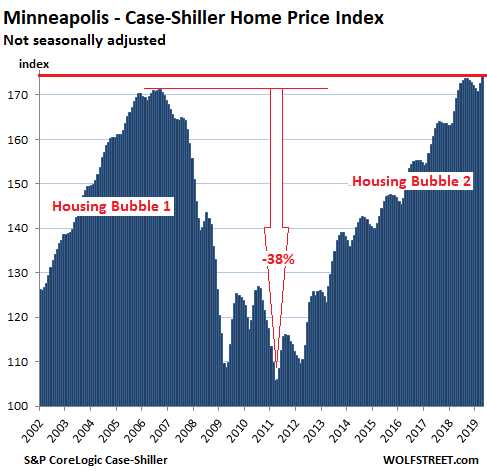 House prices in the Charlotte metro rose up 1.1% in April from March, to a new record. The increase was about in line with the pace in April last year. The index is now 4.2% higher year-over-year. Note the absence of seasonality in Charlotte: 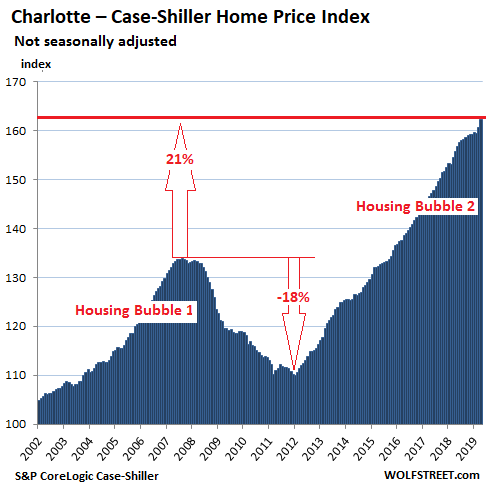 In the Atlanta metro, house prices increased 1.0% in April from March to a new record, putting the Case Shiller index 4.9% above April last year. The index is now 11% above the peak during Housing Bubble 1. This chart, which is also on the same scale as the charts for Chicago, is starting to show more white space than the prior charts, indicating that house price increases have been more muted. It also shows just how far prices dropped during Housing Bust 1, falling all the way to 82.5 by March 2012, back where the index had first been in 1996: 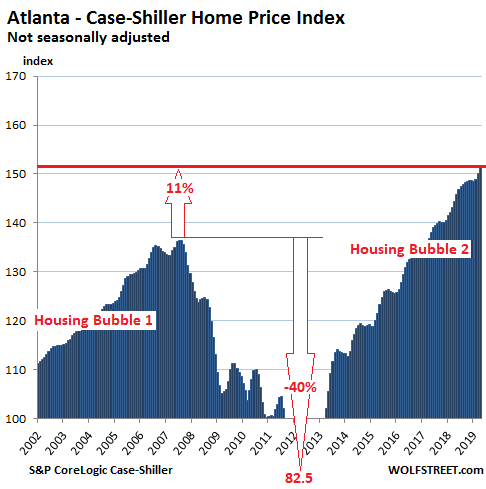 The housing market in the Detroit metro has experienced a huge rise (+95%) since the nadir before the city’s bankruptcy, but off very low levels. In April house prices jumped 1.6% and are up 3.5% from April last year. This leaves the index 1% below its peak in December 2005. The dark-blue part of the chart below is on the same scale as Chicago’s, but I added the shaded area below the scale value of 100 — the underwater part — to show just how far prices had fallen – to 1992 levels – and how much they have surged since: 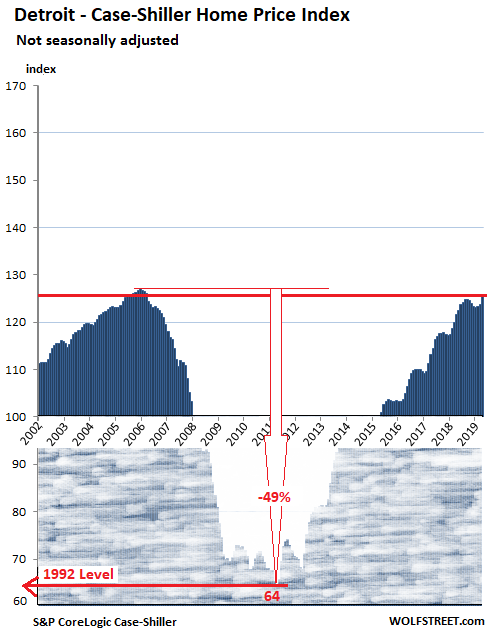 House prices in the Cleveland metro ticked up 0.7% in April from March and are up 3.5% year-over-year. They’ve now almost but not quite reached their previous peak of 2006. The index value of 123.2 indicates that house prices have risen 23.2% since January 2000. That should sound about right for “normal” housing markets that rise in line with inflation, but the US has not been a “normal” housing market, studded as it is with housing bubbles and busts and more bubbles. So this 23.2% increase since January 2000 makes Cleveland the housing market with the slowest price growth since 2000 in the 20-city Case Shiller Index, a couple of notches below Detroit: 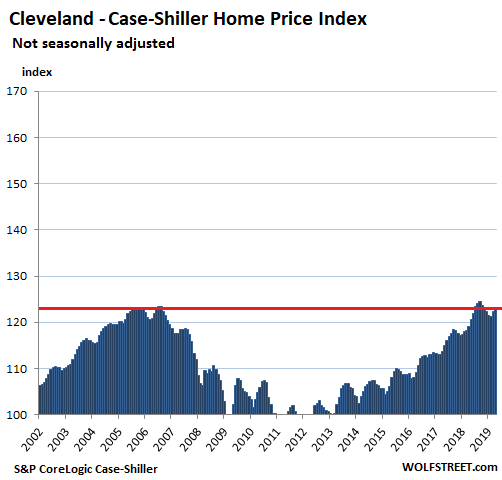 24 comments for “From Less-Splendid Housing Bubbles to Crushed Markets in America, June Update”