And now not even their foreign subsidiaries are immune.

In February 2019, Hyundai Heavy Industries (HHI) was selected by the Korea Development Bank (KDB) as the “sole bidder” for the ailing Daewoo Shipbuilding and Marine Engineering (DSME), in which the State-owned Korea Development Bank holds a 55.7% stake. Samsung Heavy Industries (SHH) had already announced they had no interest in taking over DSME, making this selection process little more than a formality.

In March, HHI finalized the deal worth about 2 trillion won ($1.6 billion) and announced it will split in two entities to fully digest DSME. HHI and DSME workers, supported by the Korean Metal Workers Union, are opposed to this spin-off, fearing it will lead to mass layoffs similar to those experienced by another money-losing mega-shipyard, Hanjin Heavy Industries, back in 2011.

While HHI is threatening workers with hellfire in form of lawsuits and injunctions, the Korean government, through its Korea Development Bank, has already pledged a further 1.5 trillion won  ($1.3 billion) in fresh paid-in capital, plus a further 1 trillion won (over $1 billion) to be provided “if needed.”

This is the latest act in the long-running crisis of the enormous Korean shipbuilding industry, which has been at the receiving end of a colossal bailout starting in 2016. DSME alone received $2.6 billion in public funds in 2017 after being caught in the largest corporate financial scandal to ever rock Korea just one year earlier. Back in 1999, the Daewoo chaebol from which DSME was later spun off, collapsed under the weight of a similar accounting and bribery scandal.

And now not even their foreign subsidiaries are immune.

To take advantage of low labor costs and often very generous financial incentives ranging from tax breaks to loans at favorable conditions, the big Korean shipyards have opened subsidiaries abroad which are just as liable to their carefree attitude towards the most basic financials as the domestic operations.

In 2004, Hanjin Heavy Industries started construction of a huge shipyard in the Zambales Province, Philippines, to take advantage of both local labor costs and the generous financial and fiscal conditions offered to private investors in the Subic Bay Freeport Zone (SBFZ). By 2016 Hanjin was employing over 20,000 locals plus hundreds of foreign nationals (chiefly from Korea and Romania), making it one of the largest private employers in the Philippines.

Hanjin apparently did not merely export their production system but also their cavalier attitude towards budgets: in January 2019, Hanjin Philippines filed for “corporate rehabilitation” (roughly equivalent to bankruptcy protection) following a default on $412 million of loans owed a consortium of five Filipino banks. This was just a slice of the company’s debt. It also owes $900 million to Korean banks, and the fate of that debt remains unclear.

This is by far the largest corporate default in Filipino history, and it has led to a very complicated aftermath, with rumors of a takeover by Chinese and/or Japanese investors, and the Filipino government tempted to nationalize the whole insolvent lot.

Daewoo-Mangalia Heavy Industries (Mangalia for short), a shipyard set up by DSME to take advantage of Romania’s low wages, ready access to the highly lucrative European market, and generous fiscal incentives for foreign investors, accumulated $800 million in losses between 2012 and 2017.

Late in 2017 the Romanian government and the KDB arranged for Mangalia to be sold to the Dutch Damen Shipyards Group for a measly $26 million. Considering the size of the docks (able to accommodate pretty much any merchant ship now in service and over 90% of existing maritime structures) and how modern and productive the whole facility is, Damen made the proverbial bargain.

Facilities as large as the Mangalia shipyard are not merely needed to build new ships, but to repair, overhaul and upgrade existing ones.

For example, in March 2018 the Maersk Honam, a very new and very large Singapore-registered container carrier belonging to the eponymous Danish conglomerate, caught fire in the Arabian Sea while en route from Singapore to Suez. It took the Indian Coast Guard over a month to put out the fire aboard the drifting ship under control (image via SMIT which was involved in the salvage operation): 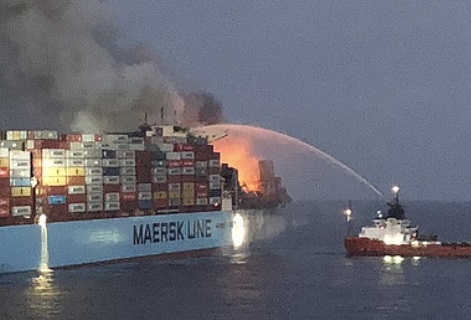 Maersk made the decision to have the Honam towed to the port of Jebel Ali, Dubai, where the part of the cargo that was still intact was unloaded. After assessing damages, it was decided to reuse the stern section of the Honam in a new ship, to be built by HHI, the same shipyard which had launched the ship just one year earlier.

The Dubai Drydocks cut the Honam in two: the 125-meter long bow section is currently being disposed of, while the 228-meter long stern section was loaded aboard the COSCO heavy lift ship Xin Guang Hua and shipped to the HHI shipyards in Geoje. This photo shows the stern part of the Honam piggybacking on the Xin Guang Hua (image via COSCO): 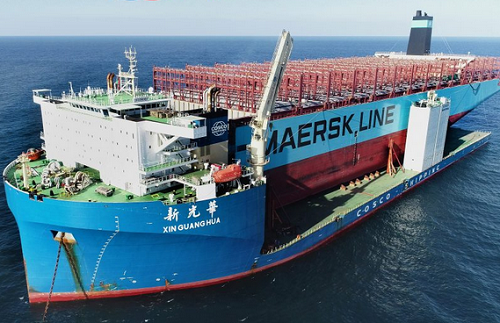 Maersk expects the “new” ship to be operative in 2020. The Honam cost $137 million to build and is a very new, clean and efficient design, so the estimated $30 million to rebuild her sounds reasonable.

Maersk has declared the Honam “general average,” meaning owners of the surviving cargo will have to pay a share of the cost for vessel damage, tow, cleanup, legal fees etc. Exact calculations are likely to take years and are already leading to costly and nasty litigation.

Cargo owners whose insurance didn’t cover general average or who relied on Maersk to provide minimal compulsory insurance will receive bills ranging from hundreds of thousands to millions of dollars.

Fires aboard commercial vessels have become common over the last few years, with incidents such as the sinking of the vehicle carrier MV Grande America earlier this year making the news. According to specialized transport and logistic insurer TT Club, 66% of such accidents can be attributed to “poor practices in the overall packing process,” which include anything from poor cargo handling to illegal mislabeling of dangerous goods.

Insurance companies are pressuring shippers to put this situation under control because it costs them enormous sums of money every year, especially as declared cargo values continue to soar and more efficient space utilization aboard container ships and vehicle carriers makes the eventuality of a fire particularly devastating.

In 2013 the large container carrier MSC Flaminia suffered a fire en route from Charleston to Antwerp which cost a crew member his life and insurers over $250 million. The cause of the fire was determined to be mislabeled cargo, in the specific unsafely packaged and undeclared calcium hypochlorite.

The sinking of the MOL Comfort container carrier in 2013, following a devastating fire, has cost insurance companies a crushing $400 million. The enormity of the damages prompted the most affected insurance company, Tokyo Marine Nichido, to sue the ship builder, Mitsubishi Heavy Industries, for ¥60 billion (over $55 million), claiming a flaw in the ship design caused the disaster. By MC01, a frequent commenter on WOLF STREET

Aircraft engine maker Rolls-Royce struggles with its debacle for the Boeing 787 Dreamliner. And China is learning it the hard way. Read… The Engines of Large Airliners and the Costly Challenges Manufacturers Face