It has become a cacophony across earnings reports by trucking companies and railroads: Shipment volumes are declining, and revenues are propped up by higher freight rates, but now freight rates are coming under pressure too, as companies are getting more aggressive to pick up shipments. The latest two to report were YRC Worldwide, one of the largest truckers in the US, and BNSF Railway. Before them, it was J.B. Hunt and others.

This is summarized by the Cass Freight Index. Freight shipment volume in the US across all modes of transportation – by truck, rail, air, and barge – in April fell 3.2% compared to April last year, the fifth month in a row of year-over-year declines, and the first batch of declines since the transportation recession of 2015 and 2016. The chart shows the changes in percent for each month compared to the same month a year earlier:

The Cass Freight Index tracks shipments of goods for the consumer and industrial sectors by all modes of transportation but doesn’t track shipments of bulk commodities, such as grains.

Also, the Cass Freight Index for Shipments ticked down sequentially from March to April, which is atypical for this time of the year. The last two times this happened was in 2013 and 2009. Some had blamed the slowdown in the winter on the weather, but there should have been a pickup in March and April, and the opposite happened.

The top black line in the chart below delineates the phenomenal boom in shipments in early and mid-2018 and how it petered out later in the year. The index went negative year-over-year in December. The red line shows the year-over-year declines in 2019 and the unusual down-tick in April: 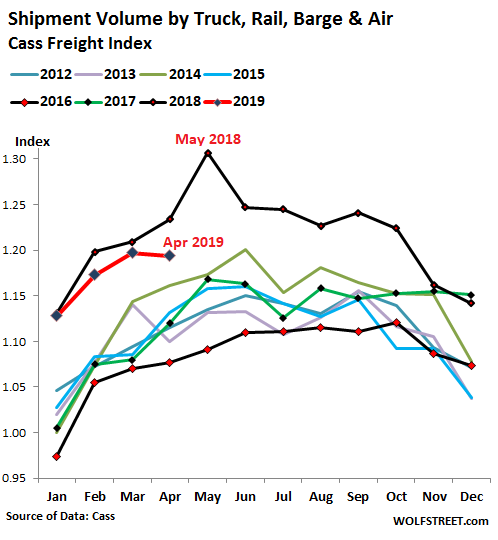 This decline in shipments is showing up in quarterly earnings reports. J.B. Hunt, the largest trucker in the US, started this trend in a big way a month ago, when CFO David Mee said that the company’s “results obviously revealed headwinds in parts of our business,” and added, “In Intermodal, volume, or lack thereof, is obviously the main story.”

Of the four categories BNSF split out, volume inched up only in “industrial products” (+1%), and fell in the other three: Coal (-10%); agricultural products (-7%), maybe due to the trade war, or whatever; and – jangling some nerves – consumer products (-6%).

There is usually a litany of factors that are cited why this decline happened, including the weather. And this was the case at YRC as well. But the company also said, “As we move through 2019, we will continue to prioritize yield over tonnage” – meaning, the company will try to keep its freight rates high, even if the shipment volume declines.

This has been the theory among the large truckers – but signs are appearing that freight rates are now coming under pressure too.

Average spot rates for hauling van trailers have been falling ever since the peak last June ($2.32 per mile). By April they’d dropped to $1.81, according to DAT.

At $1.81, the average spot rate was 20% below the average contract rate, the largest gap over the past 12 months, which is putting pressure on contract rates, that have already started to inch down ever so slowly from prior months. DAT explained its post, “Vans still waiting for the spring surge”:

The national average load-to-truck ratio for vans has lingered at or below 2 loads per truck since January, due to the availability of trucks. For comparison, we typically consider a ratio between 2.5 and 3 to be balanced, while ratios below 1.75 usually lead to lower rate.

Cass, in its report for April, released today, confirmed this situation:

The weakness in spot market pricing for many transportation services, especially trucking, is consistent with the negative Cass Shipments Index and, along with airfreight and railroad volume data, heightens our concerns about the economy and the risk of ongoing trade policy disputes.

In addition, the report highlights several “concerns” for the goods-based economy:

But pricing is still hanging in there, as YRC pointed out: priority for now is “yield over volume.”

The Cass Freight Index for Expenditures confirms this trend. The index, which tracks spending on all modes of transportation – truck, rail, air, and barge – and includes fuel surcharges, reflects the total amount spent by shippers, such as retailers or manufacturers.

After a historic peak last September, with a year-over-year price surge of nearly 20%, the index started backing down from those price increases but continues to reflect strong freight rate increases. In April, the Expenditures Index rose 6.2% from April last year – even as shipment volume has been dropping: 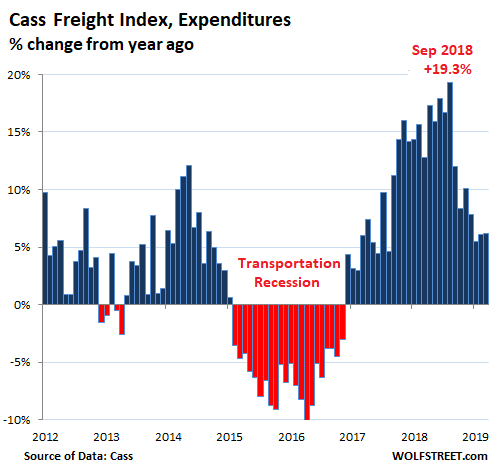 But spot market rates are indicating that contract rates too will come under pressure. The Cass report:

Although demand is no longer exceeding capacity in most modes of transportation, realized pricing power is still being reported at the contract level in some modes. Unfortunately, weakness in spot market pricing, especially in trucking, suggests that contract pricing is under increasing amounts of pressure and is at risk of going negative by the end of the year.

Shippers will welcome this. They have complained in their earnings reports all last year about surging transportation costs that were eating into their margins. And they can’t wait for these pressures to dissipate.

Trucking companies started reacting months ago, and by now they have made a hard U-Turn, that has become apparent in the collapsing orders for Class-8 Trucks. Read… Trucking Skids into Downturn after Phenomenal Boom