Here are the latest numbers.

Spending on internet advertising in the US jumped 21.8% in 2018 to $107.5 billion, and is up 117% in four years, according to the annual report commissioned by the Interactive Advertising Bureau (IAB) and conducted by PwC. This is the amount that advertisers such as Ford or P&G spent on internet ads in the US. My WOLF STREET media mogul empire is at the far end of this sector, successfully picking up crumbs.

There are two diverging dynamics: Ad spending on laptop/PC platforms (blue columns) has been declining since 2015, as advertising on mobile platforms, such as smartphones and tablets, (red columns) is rocketing higher – from a share of close to zero in 2010 to a share of 65% in 2018: 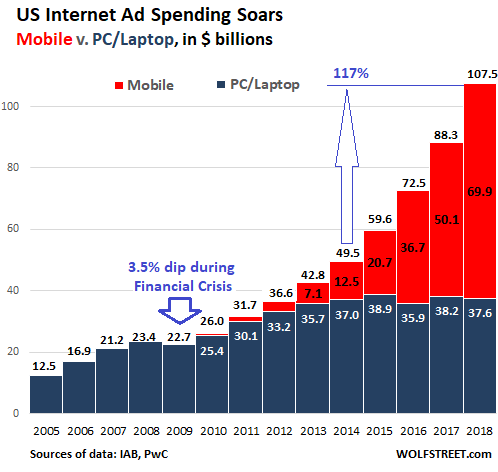 Year-over-year, advertising spending declined in the two segments that have been getting crushed for years: “paper” newspapers (-7%) and “paper” magazines (-2.1%). All other media types gained ad dollars, but in only the low single digits, except video-game advertising, which grew by 9.7%. However, internet advertising with a 21.8% growth rate the largest base by far widened the gap rapidly (“OOH” = out-of-home advertising, such as billboards, ads inside public transit, etc.): 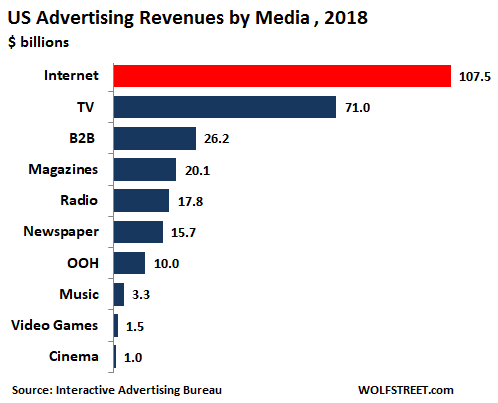 And just 10 companies took in 75% of this $107.5 billion, the report says without naming these companies. But we know the top five.

Amazon is muscling in on them. According to eMarketer, Amazon’s ad venture will grow its revenues by 50% in 2019 and become number 3, with a share of 8.8%.

I have been contacted by Amazon to join its platform for publishers which is competing head-on with Google. Google runs many of the ads you see on WOLF STREET. That Amazon bothered to seek me out and spend time with me, including actual phone calls conducted by real people, though I’m just a little speck, is not only impressive in the Google universe but also shows how aggressively Amazon is going after this. Via testimonials, it said that its deal pays publishers more than Google’s deal, but that remains to be confirmed because we couldn’t work out a deal.

In its Q1 earnings release, Amazon reported that quarterly revenue in its “Other” category – which “primarily includes sales of advertising services…” – was $3.4 billion in the quarter.

Q1 is typically not the strongest advertising quarter in the year – that would be Q4. So by the looks of it, Amazon will likely haul in close to $12 billion in ad revenues in 2019, which would grow its share to 8.8% of total internet ad spending of $129 billion, according to eMarketer estimates. Facebook’s share is expected to remain about stable and Google’s share is expected to shrink by one percentage point. So this is shaping up to be a battle royale.

The other two of the top five recipients of internet advertising dollars, according to eMarketer, in 2018 were:

This year, Google, Facebook, and Amazon will take close to 70% of all the money advertisers spend on internet advertising. So what do publishers get? Publishers such as the New York Times and the WOLF STREET media mogul empire?

The advertising universe is divided into three factions:

At one end are the publishers. Like many publishers, WOLF STREET is in the advertising business based on the now classic internet model: The content is free for anyone but you get hammered with ads, on the hope that it balances out for everyone.

At the other end are advertisers – the companies that pay for it all, such as Ford or P&G. They spent $274 billion in the US last year to entice consumers and businesses to buy their products or services. And $107.5 billion of that got spent on internet ads.

Between these two factions is an entire universe teeming with companies that shoehorned themselves between advertiser and publisher to take their bite. This includes various entities of Google, Facebook, and Amazon, the smallest outfits no one has ever heard of, ad agencies representing advertisers, ad agencies representing publishers, thousands of “ad exchanges” (automated systems were bidding takes place in an opaque manner to get ads placed on websites), various opaque layers of “ad tech” companies and other middlemen, and countless scams and assorted nastiness.

Google, Facebook, and Amazon dominate in all three factions with their different roles as they also serve ads to their own users – Google with search, Facebook with its social media platforms, and Amazon with its shopping site that runs ads on every page that shoppers look at.

And the money that advertisers pay filters through these layers, and each layer takes a portion of it along the way. In the end, only a small portion of what the advertiser actually spends for an ad on a website actually goes to the publisher that puts the ad in front of the consumer. And this small portion gets smaller every year, even as the amount spent on internet advertising continues to balloon.

This is a growing complaint among internet publishers that don’t have a subscription model. Even the large and successful ones are now going through cycles of layoffs because the revenues per ad served keep shrinking, eaten up bite by bite by the middle layers, including by the three giants that dominate those layers.

There is a democratic beauty to the ad-supported publishing model: The content is free and anyone has access to the content. In return, readers are served up distracting ads. But all these layers in the middle have destroyed the model for publishers. Many publishers have already switched to subscription models, where much or all of their content is hidden behind paywalls, and readers are still exposed to ads. While this seems like a no-brainer, here is why I rejected that no-brainer. Read…  Why WOLF STREET is Still Free and Not Behind a Paywall Though You Have to Put Up with Ads and I Make (Maybe) Less Money

84 comments for “Amazon Butts in on Google-Facebook “Duopoly” in the Huge Business of Internet Advertising. Publishers Hung Out to Dry”