Goods producing economy suffers globally. Services expected to keep it all taped together.

“There remained notable differences in performance between the manufacturing and services sectors. Whereas manufacturing production fell for a third successive month, service sector growth was sustained at a solid, albeit slower, rate” – so the IHS Markit Composite PMI this morning about the Eurozone.

And that is a global phenomenon that also is playing out in the US. In Germany, the contrast is particularly sharp: The manufacturing contraction has become steep, even as services are growing strongly.

The J.P.Morgan Global Composite PMI, also released this morning, which combined services and manufacturing for the major economies around the globe, picked up the theme:

The global service sector continued to outperform its manufacturing counterpart in April. This was despite output growth easing to a three-month low, with decelerations signaled across the business, consumer and financial services sub-industries.

Conditions in manufacturing remained lackluster, with production still rising at a near-stagnant pace. The consumer goods sub-sector was a bright spot, seeing growth accelerate to a three-month high. In contrast, output contracted in both the intermediate and investment goods industries.

Subdued international trade flows weighed on global economic growth in April, with all-industry new export business falling for the fifth straight month. A further drop in manufacturing new export orders was only partially offset by a modest increase at service providers. Germany saw a marked decrease in foreign demand, China a modest decline, and the US mild growth.

For the US services sector, this was confirmed last week by the Non-Manufacturing ISM Report and the IHS Markit US Services PMI. With both, a value above 50 indicates growth and a value below 50 indicates contraction in the services sector. The higher the value, the faster the growth.

The ISM Non-Manufacturing Index ticked down to 55.5 for the April reading, from 56.1 for March: still solid growth but below the red-hot growth spurts in September, October, and November 2018, when index levels went as high as 61.6 – not a very common sight, with index exceeding 60 in October 2017, and in July 2015.

The IHS Markit US Services PMI also ticked down in April to 53.0. The report:

Uncertainty and increased competition meanwhile pushed business expectations to the lowest for almost three years, while rates of input price and output charge inflation eased to 26- and 18-month lows, respectively.

The chart below shows both indices: the ISM Non-Manufacturing Index (blue line back to 2009) and the IMS Markit Services PMI (green line, back to 2012). Above the red line (above 50) indicates expansion in the services sector; below the red line indicates contraction (data via Investing.com): 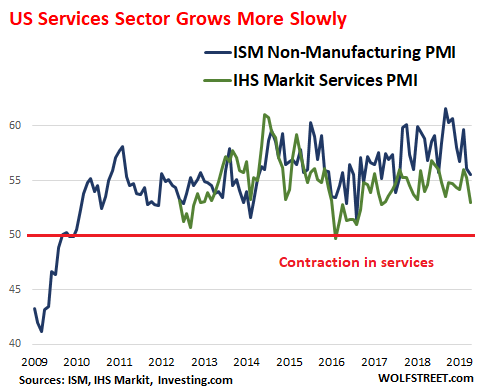 The US manufacturing PMI ticked up a tiny bit in April, and remains in slow-growth territory at 52.6 — and thus the cleanest dirty shirt among the largest economies. “Although faster than that seen in March, the latest upturn in production across the goods producing sector was among the softest seen in the last two years and below the series trend,” the report said: 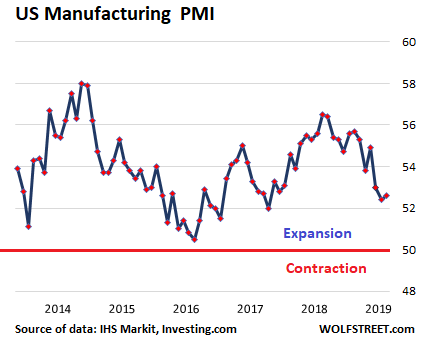 No country displays the split between manufacturing and services growth more harshly than Germany. The manufacturing PMI for Germany is in a steepest contraction since the worst moments of the euro debt crisis, with a value in April of 44.4 (below 50 = contraction). But the services PMI, released this morning, rose to 55.7, the fourth month in a row of increases, the highest level since September 2018, and above the long-run average of 53.3. IHS Market added:

Furthermore, the sustained upturn prompted firms to create jobs at the fastest rate since 2007. Wage pressures meanwhile underpinned a steep rise in service providers’ costs, which in turn contributed another sharp hike in average prices charged.

The chart below shows the divergence in Germany of the strong services PMI (blue line) and the plunging manufacturing PMI (red line): 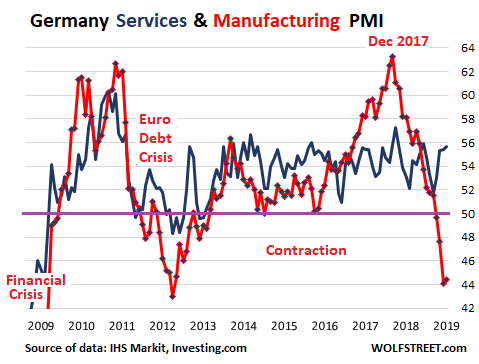 The J.P.Morgan Global Composite PMI, tracking services and manufacturing around the globe, reported this morning that New Export Orders remained in contraction in April, and backlogs fell into contraction. The other sub-indices were expanding, but at slower rates, and “business optimism dipped to a near three-year low in April, with confidence easing at manufacturers and service providers alike.”

68 comments for “Manufacturing and Services Out of Sync, Not Just in the US”