“It is their interaction with froth that matters most. How much a housing market adjusts depends on how much froth there is”: Poloz

Across Greater Vancouver, British Columbia, sales of all types of homes so far this year through April plunged to 6,212 homes, the lowest count since 1986, as the market is freezing up.

And prices are descending at speeding-ticket velocities:

“Buyers have become increasingly hesitant, particularly for unbuilt product such as pre-sale condo assignments and new unfinished development in general, says Steve Saretsky, a Vancouver Realtor and author behind Vancity Condo Guide, in his April report. “This is prompting condo developers to increase bonuses and incentives as unsold inventory begins to pile up at presale centers across the lower mainland.”

The average price per square foot – historically “a very consistent and reliable price metric with much less volatility,” Saretsky says – has now dropped 16% from the peak in January 2018: 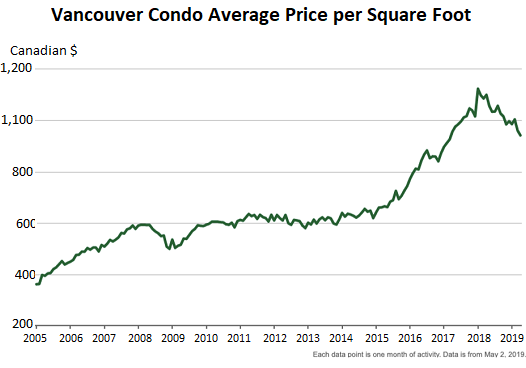 Sales of detached houses in the city of Vancouver dropped to 130 houses, the worst April in decades, down 69% from 2015. The chart below shows the number of sales for each April going back to the 1990s – a sign the market has frozen up, that buyers are unwilling to get anywhere near sellers’ aspirational asking prices, and deals are not happening: 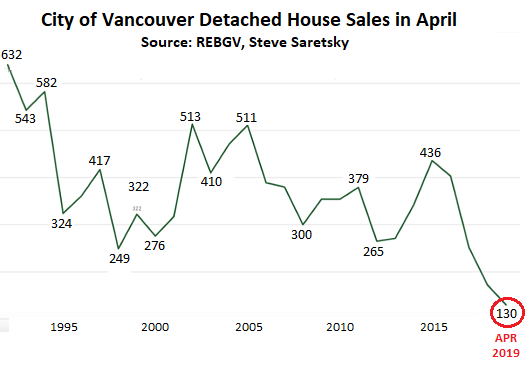 Inventory of detached houses in the city of Vancouver, at 1,616, represents 12.7 months’ supply. But the inventory was down 3% from a year ago, as potential sellers, hoping for a miracle apparently, are trying to out-wait the market.

The year-over-year price declines of detached houses vary by area. To give a broader view: In Greater Vancouver, the Home Price Index of the Real Estate Board of Greater Vancouver has dropped in every one of the 22 areas the REBGV lists, with 12 areas booking double-digit declines. Holding up the best was the lower end, Bowen Island, with a year-over-year decline in the HPI of 0.2% (to C$990,88). In West Vancouver, near the high end, the HPI dropped 15.7% (to C$2.57 million).

So with housing turmoil hitting Vancouver, Bank of Canada Governor Stephen Poloz in a speech today addressed “froth” in the markets, what caused it in the first place, and what is now causing that “froth” finally to come off:

Our research shows that the big rise and fall in housing resale activity in British Columbia and Ontario can mostly be explained by shifts in house price expectations.

When house prices are rising rapidly, people tend to extrapolate that experience and buy houses early to avoid further price increases, or to profit from them if they are speculators. In other words, markets become frothy.

However, when those price expectations are revised down, demand for houses can cool suddenly. And this is what has happened. The trigger could be anything, including new taxes on foreign buyers, stricter mortgage guidelines, rising interest rates, or simply that rising prices create an affordability roadblock for more and more people.

What we take from this is that it is not higher interest rates and changes to mortgage lending guidelines that have had the greatest effect on housing demand. Rather, it is their interaction with froth that matters most. How much a housing market adjusts depends on how much froth there is.

Supporting this conclusion is the fact that many other markets across the country look quite healthy. Resale activity has been solid in places as diverse as Halifax, Moncton, Montréal, Ottawa and, more recently, right here in Winnipeg.

So the surgical operation of removing that froth from the market appears to be going well. Too bad for the folks that bought into this froth over the past few years, misled by their own “house price expectations” and all the deafening media hype in past years about the forever-surging home prices.