On February 18, I wrote Why WOLF STREET is Still Free and Not Behind a Paywall Though You Have to Put Up with Ads and I Make (Maybe) Less Money. Readers posted a record 315 comments, expressed a huge amount of heart-warming support, and made many excellent suggestions.

I have implemented some of the suggestions, including making the donation button more visible (it was nearly impossible to find on mobile) and adding the “Email to a friend” button under the title.

There was one suggestion that many people have made and supported but that isn’t all that easy to implement: Creating an optional ad-free version of WOLF STREET. Readers would be able to access it by paying some annual subscription fee. This ad-free version would have the same articles and charts but without the silly, intrusive, distracting ads.

There are some problems with this idea of an ad-free subscription option, including the issue of duplicate content that search engines frown upon. Most of those problems can be worked around. But there is one big issue that we have not been able to find a good solution to: There can only be one comment section, and it must always be available to everyone.

So here is the idea that my developer and I have come up with, and I need to hear from readers who would like to use the ad-free subscription option to see if this even works for you:

All content would remain free on the ad-supported site, and everyone would still be able to use it as now.

An ad-free option would be delivered via email on a subscription basis.

The ad-free version would be emailed once a day and would contain all articles and charts I published since the last email went out.

But it wouldn’t have comments... The emailed version would not contain any comments and would not allow the recipient to comment.

A button to click at the bottom of the article would take the subscriber from the ad-free version in the inbox to the WOLF STREET website, but directly to the top of the comment section. This would bypass the article and some of the ads, but there would still be ads in the comments section.

In other words: To read the comments or post a comment, subscribers would have to leave the serene ad-free environment they paid for so dearly and return to the hurly-burly world of ad-supported content, though they would skip the article itself and some of the ads and head straight to the top of the comment section, where they might still encounter some ads.

To get an idea how this would work, click on this sample button, which will take you to the top of the comments of the February 18 article:

There are other functionalities that are only available on the ad-supported site and will not be available in the emailed ad-free version. This includes all prior articles and searching the site for prior articles.

Also, any links in the emailed article will take you to either the external websites or to articles on the ad-supported version of WOLF STREET, and you’ll have to do hand-to-hand combat with ads once you get there.

Also, if you’re using a free email service, such as Yahoo, that serves its own ads, you will continue to get those ads, but they just won’t be my ads.

How much moolah are we talking about?

I’m currently thinking $60 for a 12-month subscription, payable in one payment.

I need your feedback on this compromise

This is for people who hate ads. But it’s not perfect. The content is the same for both the public and the ad-free version. But it’s a compromise because there can only be one comments section, and it must remain public.

Also this is probably not for readers who use an ad-supported email service because they will get ads anyway, just not WOLF STREET ads.

Readers interested in the ad-free version of WOLF STREET, please let me know in the comment section below if this compromise would work for you. Even if you have never posted a comment before, and would never post a comment as a matter of principle, please make an exception: just fill in any name and an email address, and let me know what you think about this ad-free version.

I had a blast at the WOLF STREET meetup in San Francisco on April 30, at the maker-space SHARED. Thank you, everyone, for coming. And thank you for all the help I got from numerous people who helped me set this up and who brought so much beer and wine.

It was great to exit the realm of the Internet for a moment and meet the awesome people who read our articles and write comments, or who skip our articles entirely and just read the comments.

Bernadette, who helped with many things, including making the wonderful guest book and getting everyone to sign it, also took the photos – the only problem being that now we don’t have a photo of Bernadette! I forgot all about that in the heat of the battle. I would have loved to have a photo of her in the collection of photos of the event. Lesson learned….

The sign on the front door, by Kitten Lopez: 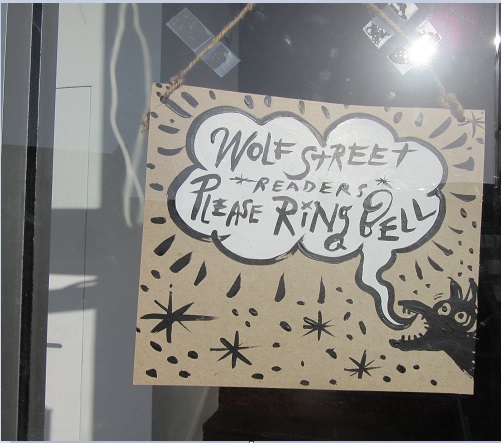 Kitten Lopez making beautiful name tags on the spot as people come in: 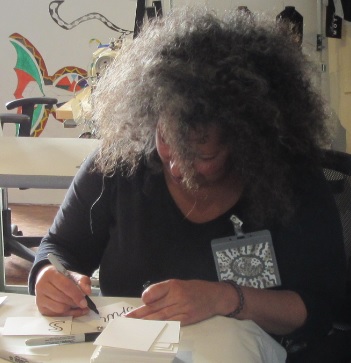 Signing the guest book and posting a paper-and-pen comment: 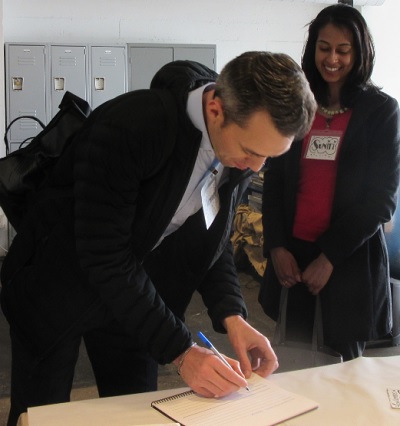 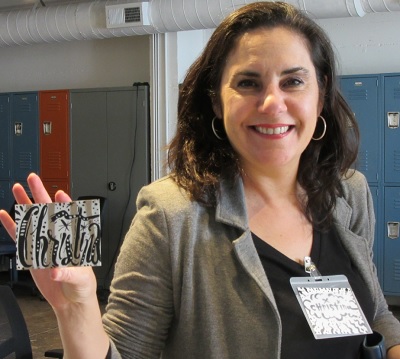 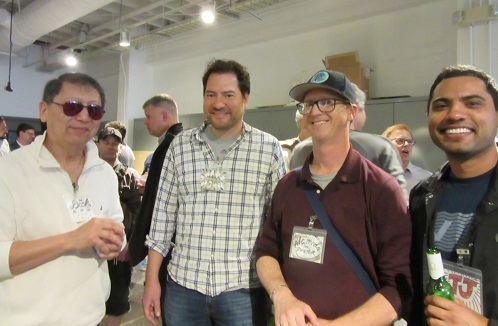 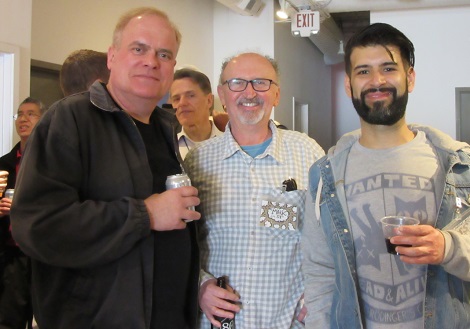 The tall guy in the photo below is Steve who instantly became famous in the comment section when he announced that he would ride his motorcycle over to the meetup — from the East Coast!

It took him four days. He said he followed my advice (posted as a reply to his comment) and took the southern route, which added a lot of miles, but it beats getting caught up in a snowstorm while trying to cross the Rockies, including the Sierra Nevada, in late April. We’re so glad Steve made it! 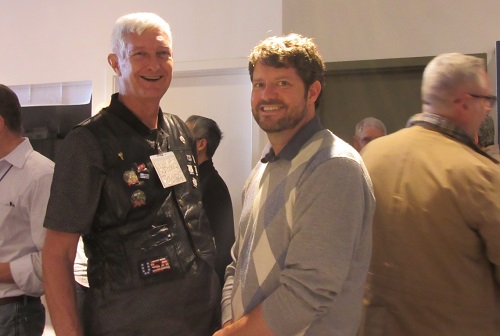 I was delighted to meet Nicole, the only or first paraplegic dentist in the US, and she has been practicing for 20 years (forgive me if I remember this incorrectly), along with her parents Christa and Gary. 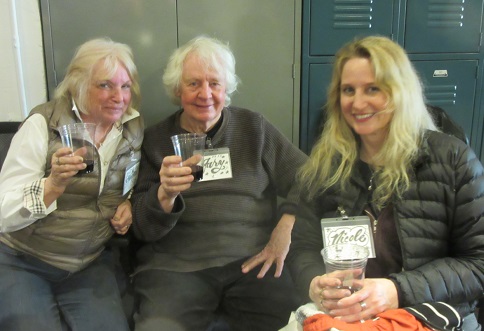 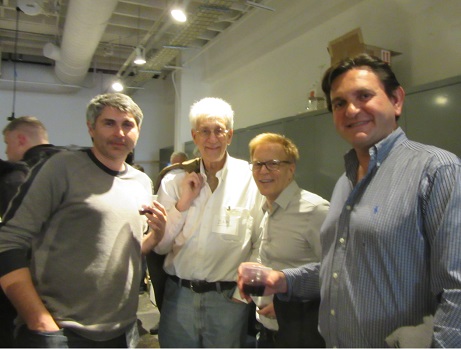 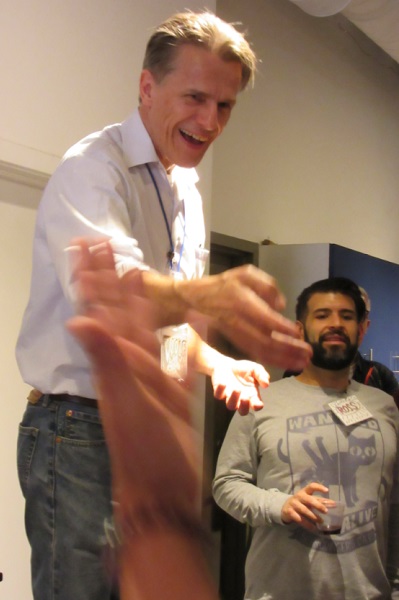 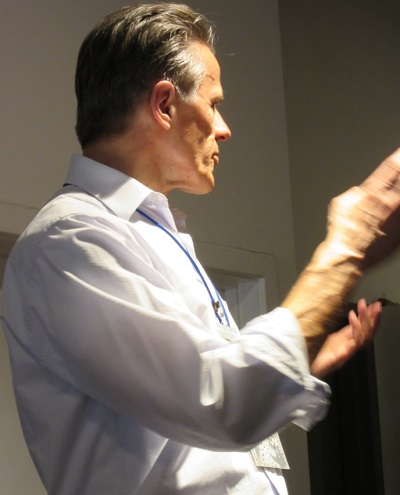 OK, maybe what I said didn’t come out right… 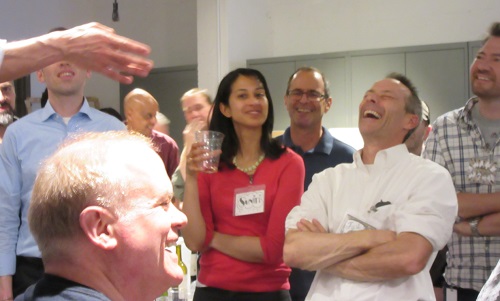 Our great artist and iconic commenter… 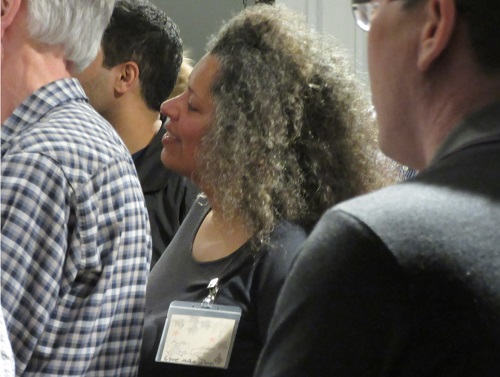 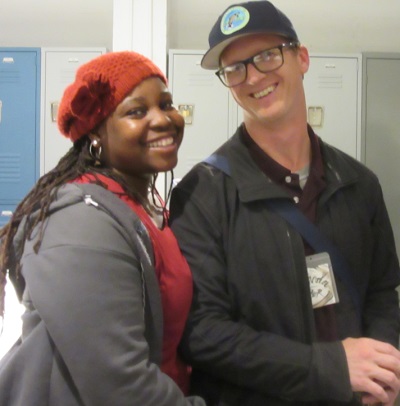 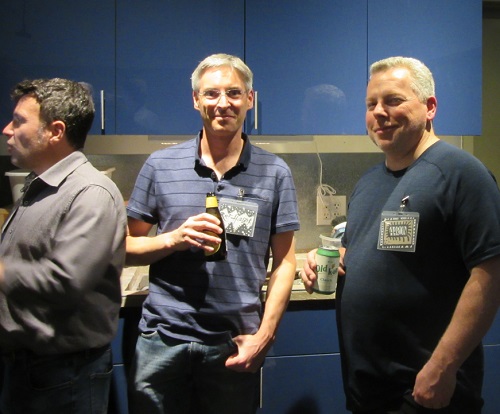 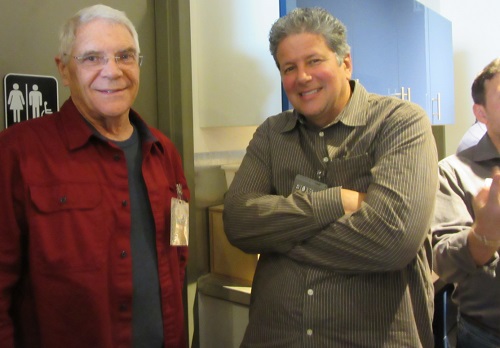 From left to right: Fred Heidler, Aaron, and Alex Olaru – three of the volunteers, bringing large amounts of beer and wine, along with ice and coolers! Fred and Alex also helped me sort through possible venues. 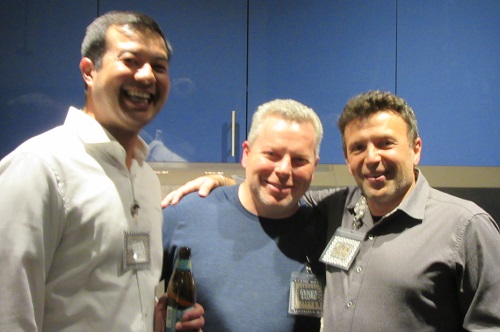 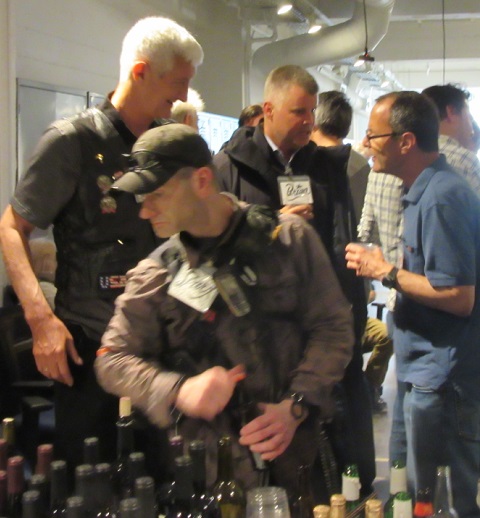 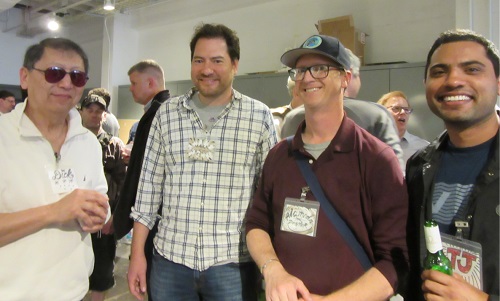 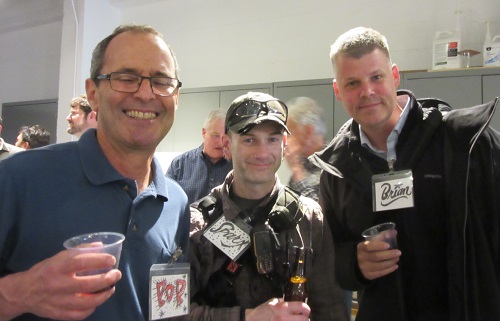 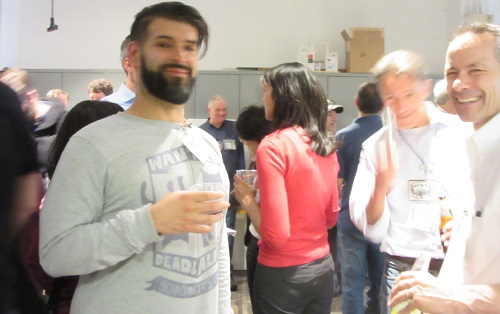 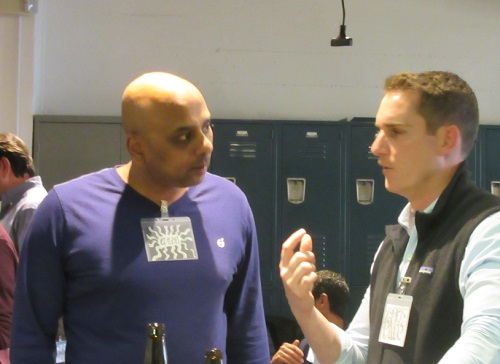 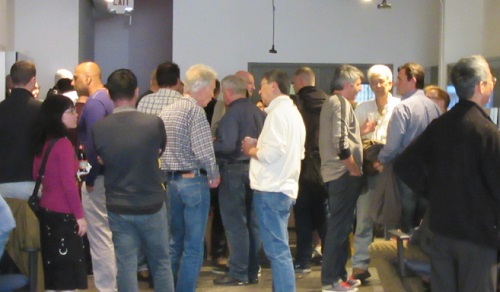 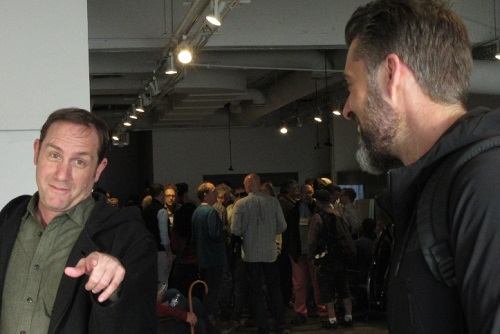 “I’m a little concerned. Is Wolf ever going to grow up?” 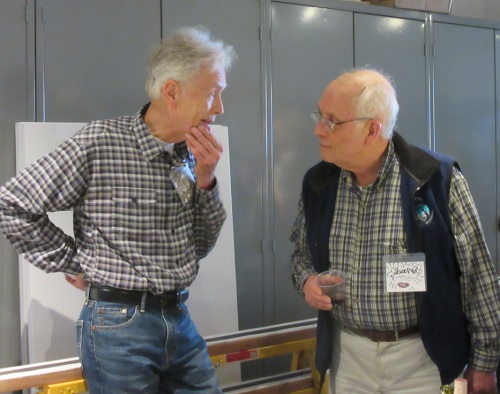 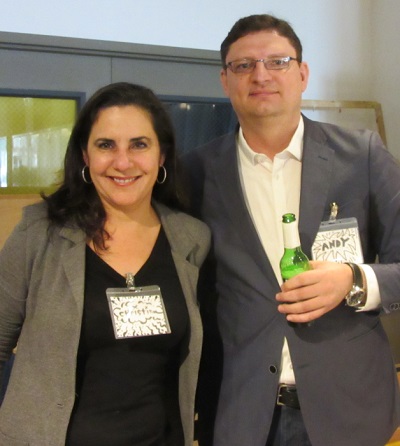 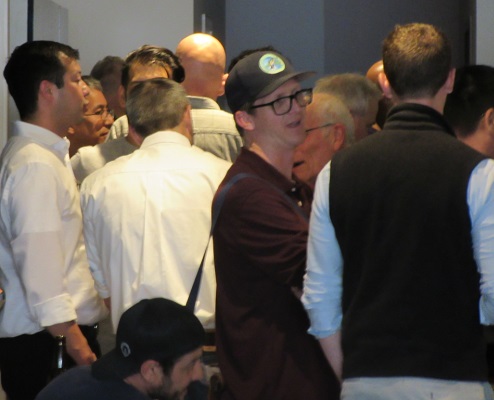 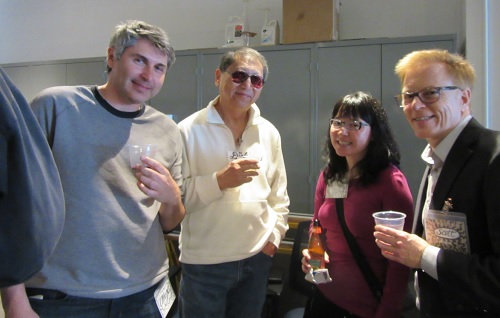 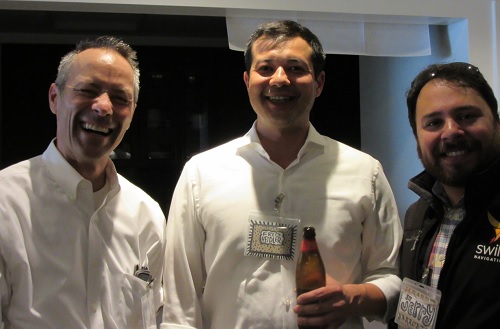