There is a counterpart to “The Most Splendid Housing Bubbles in America,” as I have come to call the San Francisco Bay Area and the metros of Los Angeles, Seattle, Dallas, Boston and some others where home prices have surpassed, often by a wide margin, the crazy peaks of Housing Bubble 1 that imploded with such fanfare about a dozen years ago, even though some of those bubbles are now once again deflating. The counterpart to these bubble markets are markets where home prices:

This is the epitome of Housing Bubble 1 and Housing Bust 1, and it’s now trying to complete Housing Bubble 2 in a hurry. Single-family house prices in Miami ticked up again in January, according to the CoreLogic Case-Shiller Home Price Index released yesterday, to a new Housing Bubble 2 record. And are up 4.4% from January last year: 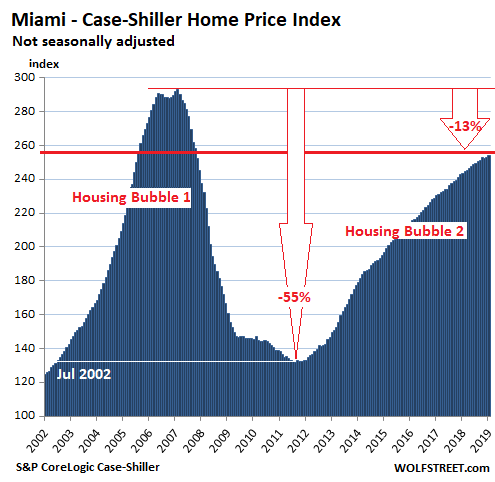 In the seven years from 2000 through February 2007, the peak of Housing Bubble 1 in the Miami metro, single-family house prices nearly tripled, according to the Case-Shiller Index. That’s a price explosion of mind-boggling speed and magnitude, upon which prices collapsed 55%, and by 2012, were back where they’d been in July 2002. Then prices began to re-surge but remain 13.4% below the peak of Housing Bubble 1.

The Core-Logic Case-Shiller Home Price Index was set at 100 for January 2000; a value of 200 means prices as tracked by the index have doubled since the year 2000. A value of 300 means prices have tripled. At the peak of Miami’s Housing Bubble 1, the Case-Shiller Index stood at 293 – hence the near-tripling of prices in seven years. Even today, with an index value of 254, the index is up 154% from 2000. What is forming before our eyes is a beautiful Housing Bubble 2.

Single-family house prices in the Phoenix metro began spiking in January 2004. By the peak of Housing Bubble 1 in July 2006, in two-and-a-half years, the Case-Shiller index skyrocketed 80%. Then home prices collapsed. By 2011, they revisited levels where they’d been in 2000. Then prices surged again. In January, the index ticked down below the November level, but is still up 7.5% from January a year ago. It remains 17.7% below the crazy peak of Housing Bubble 1: 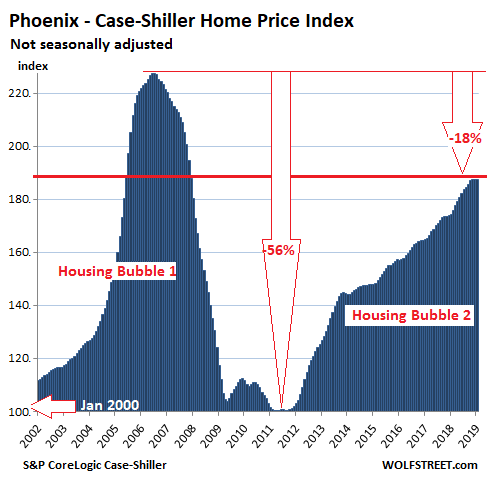 The Core-Logic Case-Shiller Home Price Index is a rolling three-month average; this morning’s release tracks closings that were entered into public records in November, December, and January.

The index is based on “sales pairs”: It compares the sales price of a house in the current month to the prior transaction of the same house years earlier (methodology). This eliminates the issues that can skew median price indices (changes in mix) and average price indices (a few big outliers). By tracking changes in price of the same house (sales pairs) over time, it tracks how much more, or less, it takes to buy the same house, and thereby it tracks how fast the dollar is losing or gaining purchasing power with regards to buying the same house over time. This makes the index a measure of house-price inflation or deflation.

Single-family house prices in the Las Vegas metro jumped 10.5% in January from a year ago, according to the Case-Shiller Index. But since October, the market fizzled and the index for January is about flat with September. Las Vegas was of course one of the notorious Housing Bust 1 locations, and prices, which had peaked in September 2006, plunged 62% by February 2012, to levels not seen since the 1990s. But even after the price surge in recent years, the index remains 19% below the crazy peak of Housing Bubble 1: 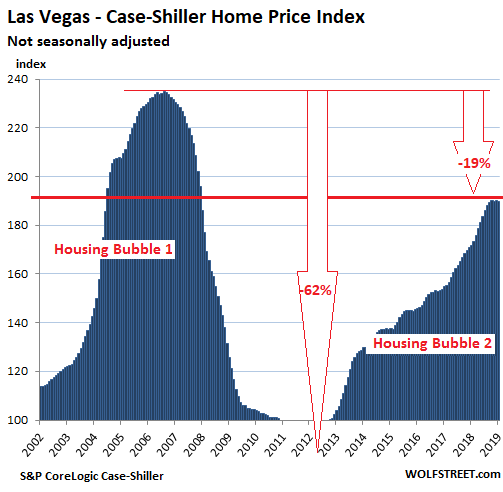 Prices of single-family houses in the huge and diverse Chicago metro ticked down again in January, for the fifth month in a row, and are 2.3% below the post-collapse peak of August last year. So far, this decline is in line with prior seasonal declines. Year-over-year, the index is up 2.4%. It remains 15.9% below its Housing Bubble 1 peak: 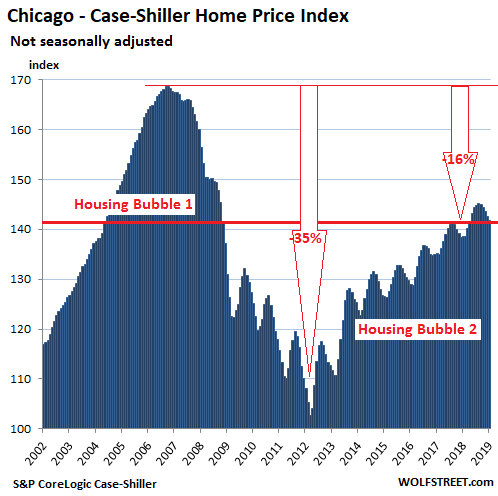 The Case-Shiller Home Price Index for the Washington D.C. metro dipped in January to the lowest point since May 2018, but due to the strength early in 2018, is up 3.1% year-over-year. It is still down 9.6% from its ludicrous levels at the peak of Housing Bubble 1, under which prices had skyrocketed 150% in the six years from 2000 through the peak in May 2006: 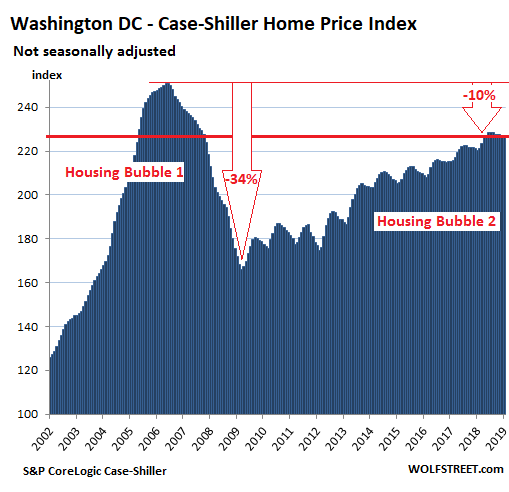 House prices in Charlotte rose again in January, continuing a relentless multi-year series of month-to-month price increases. They’re now 20% above the peak of Housing Bubble 1. But Housing Bubble 1 in Charlotte was not as extreme as in other markets, with prices having surged 35% in seven years, instead of 200% as in Miami. So, Housing Bust 1 was milder was well. But over the past six years, prices have risen 40%. At this pace, once the index gets closer to 200, Charlotte will soon be promoted to a slot in the Most Splendid Housing Bubbles in America: 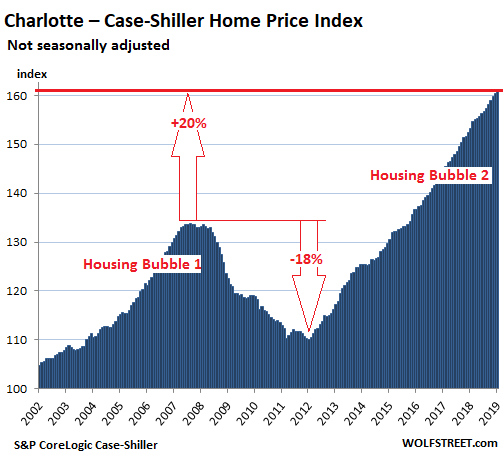 House prices in Cleveland inched down in January to be flat with June 2018. The Case-Shiller Home Price Index is 22% above where it had been in 2000. And there are no signs of a housing bubble. There was strong price growth before 2006, then a relatively mild drop, and mild growth since 2012. I kept the left scale at the minimum range in this series, going from 100 to 160, such as Chicago, but almost half the size of Miami’s scale, which goes to 300. This shows how little prices have moved compared to a market like Chicago: 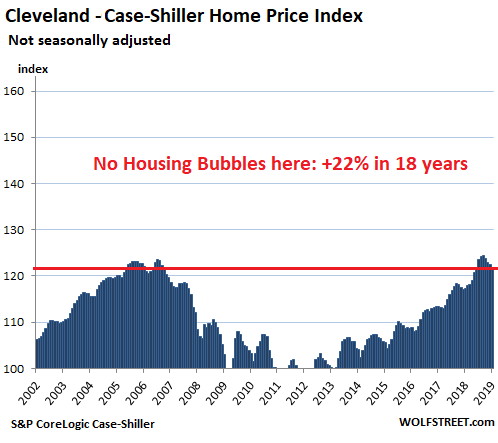 The Detroit metro includes the largest city that ever filed for bankruptcy in the US. The filing, expected for a decade, occurred in 2013. But by that time, home prices, which had plunged to levels not seen since the early 1990s, had already started recovering. For the whole metro, the Case-Shiller Index has risen 47% since 2013. Like Cleveland, I kept Detroit on the same minimum scale, with 100 being the bottom: 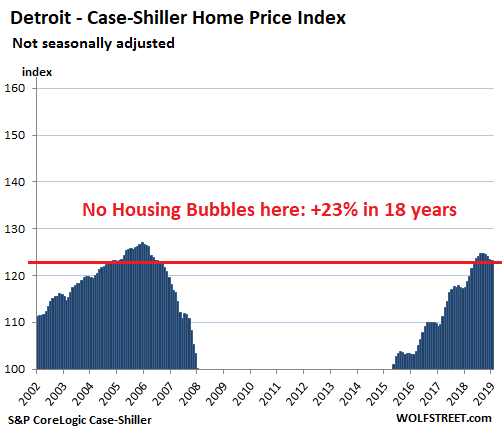 77 comments for “And the Less-Splendid Housing Bubbles & Crushed Markets in America?”