This economic slowdown is not unique to Germany but has been spreading across the EU.

OK, this is embarrassing in the land of super-stimulus via the ECB’s negative-interest-rate policy and years of QE that were supposed to perform miracles: Production in Germany’s industry, which includes construction, dropped 1.9% in November from the prior month (seasonally adjusted), the German statistical agency Destatis reported this morning. This drop is also embarrassing because economists polled by The Wall Street Journal had expected a 0.3% gain.

The agency also downwardly revised October, to a monthly decline of 0.8%. This makes three months in a row of declines. In November, compared to a year earlier (adjusted for inflation and calendar differences, but not for seasonality), the production index dropped an ugly 4.7%: 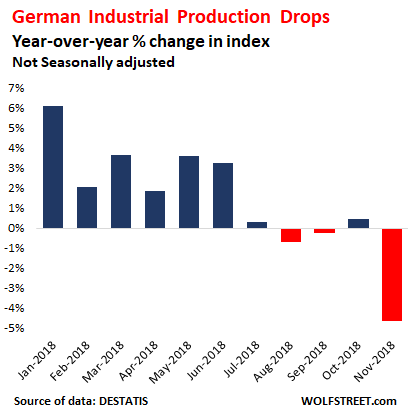 Production was down in all major segments, including energy and construction which are focused on Germany itself, rather than exports.

On a monthly basis, seasonally adjusted:

Industrial production is a big power in the German economy. And the trend is not good. Germany’s GDP already declined in the third quarter: 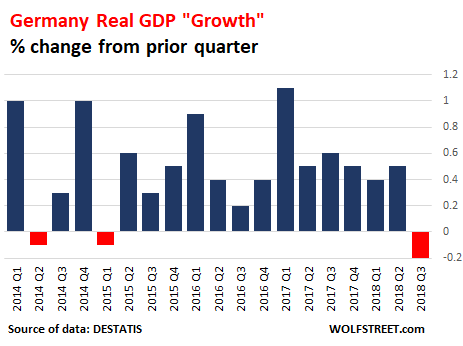 The declines in production in October and November put Germany a step closer to “negative economic growth,” as it’s called euphemistically, for two quarters in a row. If this occurs, it would be a technical recession.

And it’s not going to get a lot better soon: Destatis reported yesterday that new orders in manufacturing – a harbinger for future production – dropped 4.3% in November from a year ago (adjusted for inflation and calendar differences); and it revised down October’s orders to a year-over-year drop of 3.0%.

The difficulties facing the German economy have been amply projected, by the forward-looking ZEW indicator that measures expectations for the German economy. It started plunging early summer last year and continued plunging into November [read… “Outlook Deteriorated Even More for the Eurozone than for Germany,” Despite NIRP?]

The good thing is that private and public consumption are holding up for now. Retail sales still clung by their fingernails to gains in November, inching up 1.1% from a year ago. And in the fourth quarter at least, they could absorb part of the damage taking place in Germany’s industry. But it is likely that GDP in the fourth quarter will once again wildly disappoint economists and the government that have already been lowering their projections, but haven’t lowered them nearly enough.

And this economic slowdown is occurring despite, or perhaps because of, the mother of all stimuli engineered by a major central bank – negative interest rates and massive QE – that has benefited a few hedge funds who were able to front run the ECB’s bond buys and make a quick buck, and bond traders for a while, as bond prices were rising due to falling yields. And it has allowed even junk-rated companies to borrow money for a song from beaten down investors, savers, and pension funds. But this stopped a year ago. Since then corporate bond prices have fallen as yields have risen, particularly at the riskiest end of it. Stocks are down sharply across the EU too, with the German Dax down 20.5% from its 52-week high a year ago.

This economic slowdown is not unique to Germany but has been spreading across the EU.

It’s just a bitch when the massive central-bank stimulus that messed up so much produced so few if any lasting economic benefits. And all these economic activities described above were taking place even when the ECB was still pursuing its QE, including buying corporate bonds, to repress returns for investors and the cost of borrowing for even the riskiest companies. But this too has now ended.

Here are some ugly long-term charts, including those of Europe’s stock markets, that Wall Street doesn’t want us to see. And now US stocks are infected too. Read...  Long-Term “Buy & Hold” Crushed Stockholders in Largest Markets Except US & India. But for the US, Luck’s Running Out

67 comments for “Germany Heads for a Technical Recession”