While the trade disputes between the US and China loom large for Germany’s export-dependent economy, the developing malaise is broader. The German stock index DAX has dropped 15.4% since the end of January, even after today’s 1.3% gain. “Negative growth” in GDP is now a term that is cropping up to describe the third quarter. The median estimate of analysts surveyed by Bloomberg now shows a decline in GDP of -0.1% from Q2 to Q3. The official first estimate will be released Wednesday.

But it’s not just about foreign trade: “The figures for industrial production, retail sales, and foreign trade in Germany all point towards a weak development of the German economy in the third quarter,” said Achim Wambach, president of the Center for European Economic Research (ZEW), when commenting today on the ZEW Indicator of Economic Sentiment for Germany, which turned negative in April and has become uglier since: 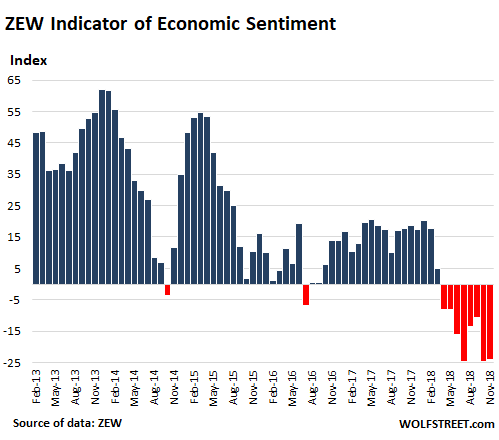 The ZEW indicator measures expectations for the German economy, and is forward-looking. In November, instead of bouncing back after the plunge in October, it remained essentially flat with October, at negative -24.1. The readings for November, October, and July were at the lowest levels since August 2012, when the Eurozone was still scrambling to get out of its euro debt crisis.

The indicator is 46.8 points below its long-run average level of +22.7!T his is happening even though the ECB’s negative-interest-rate policy (NIRP) still rules.

To get this data, the ZEW surveys about 350 analysts from finance, research, and economic departments at banks, insurance companies, and large industrial enterprises, “as well as traders, fund managers, and investment consultants” (methodology).

In addition to the forward-looking sentiment indicator, the ZEW also offers an indicator of how experts see current economic conditions in Germany.

The indicator of the current economic situation had dropped 6 points in October to 70.1, the lowest level since December 2016, and then plunged 11.9 points in November to 58.2 points 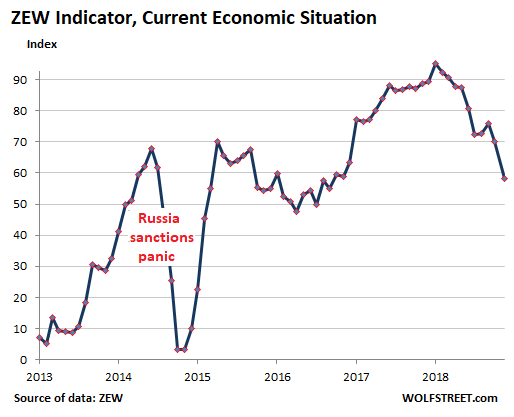 The report specifically blames industrial production, retail sales, and foreign trade for the sharp decline in current conditions – all pointing “towards a weak development of the German economy in the third quarter.”

“The expectations of the survey participants for the coming six months do not show any improvement. This means that, at the moment, they do not expect to see a speedy recovery of the currently weak development of the economy.”

And then the ugliness spreads. The ZEW also offers indicators for the entire Eurozone:

And the report added: “As a result, the outlook for the Eurozone has deteriorated even more than it has for Germany.”

The ECB’s economic stimulus in form of negative interest rates (still in effect) and QE (now being tapered to zero) have apparently expended their magic. Consumer price inflation in Germany has now reached 2.5%, even as the ECB’s deposit rate is still -0.4%. In other words, inflation is running nearly 3 percentage points above the central bank’s policy rate. This is called “financial repression.” Nothing good ever comes of it.

41 comments for ““Outlook Deteriorated Even More for the Eurozone than for Germany” (Despite NIRP?)”