Homebuilders, a bedraggled bunch recently, breathe a sigh of relief, but get crushed anyway.

“NOTICE: Due to a lapse in federal funding this website is not being updated,” the Commerce Department’s website says currently on the page where the Census Bureau would have published this morning’s data for new-home sales, inventory, and prices for the month of November.

And that’s a good thing for our bedraggled homebuilders.

On November 28, when the October data for new home sales, inventory, and prices were released, homebuilder stocks got punished, after already having been brutally punished for much of the year. The data was nasty (my take at the time, including charts):

So this morning, the data for November would have come at the worst possible moment, with stocks already getting hammered for much of December, and getting re-hammered today, after the blockbuster one-day-wonder rally yesterday.

So homebuilders don’t really need a replay of this. Nevertheless, and despite the hushed-up November data, the Home Construction ETF sank 2.5% this morning.

On Wednesday, when the overall stock market had one of its most explosive rallies and epic short-squeezes ever, with all indices surging, the homebuilders too surged, and the Home Construction ETF jumped 4.3%, bouncing off its Christmas-Eve low of 28.55, the lowest closing price since January 23, 2017, and back where it had first been in June 2016.

The Christmas Eve close was down 38% from peak of 46.25 on January 22, 2018. It completely unwound its fantastical Trump bump. And yesterday’s huge bounce is a barely visible dimple in the two-year chart: 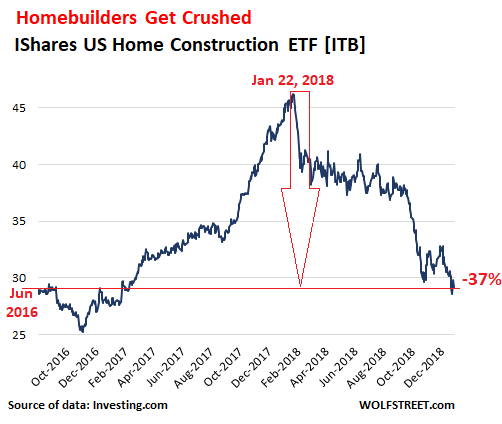 Thanks to the hushed-up data, the ITB is only down 2.5% this morning. At 29.01, it has plunged 37% from its peak on January 22 this year. And the individual homebuilders are moderately lower instead of getting a full whack from unwelcome housing data:

So let’s thank the government shutdown for preventing a further debacle among our bedraggled homebuilders and for pulling a much needed blanket, at least temporarily, over the deteriorating housing market data.