Sales of new single-family houses plunged 12% in October, compared to a year ago, to a seasonally adjusted annual rate of 544,000 houses, according to estimates by the Census Bureau and the Department of Housing and Urban Development.

With an inventory of new houses for sale at 336,000 (seasonally adjusted), the supply at the current rate of sales spiked to 7.4 months, from 6.5 months’ supply in September, and from 5.6 months’ supply a year ago. Suddenly gone is the previously hyped “shortage” of inventory: 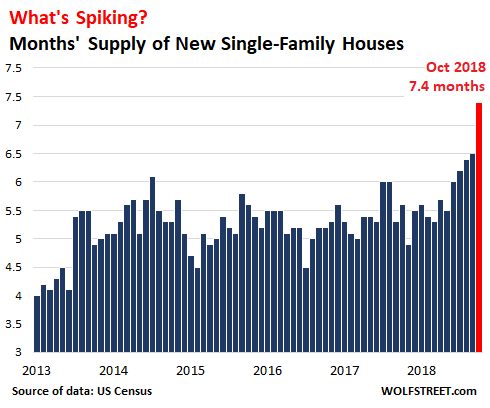 In fact, 7.4 months of supply of new houses was the highest since February 2011, during Housing Bust 1, the first housing bust in this millennium.

The chart below, going back to 2004, shows how months’ supply clearly identifies the trajectory of Housing Bubble 1, with about 4 months’ supply or below during the upward price surge through 2005. But then, as prices were turning south, the hyped “shortage” of homes suddenly turned into a flood of homes, and contributed to the unglamorous bust in prices.

So the current spike in supply fits right into this scene and is not exactly propitious: 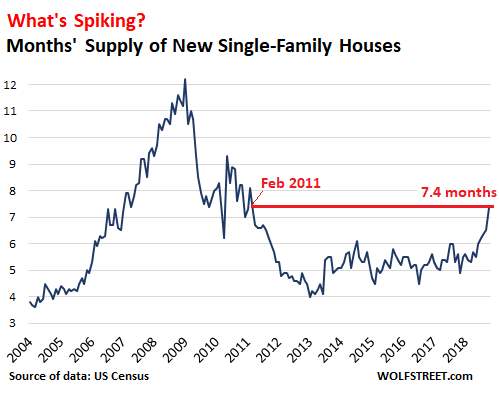 What gives? The price.

The median sale price of new single-family houses sold in October dropped 6.6% from a year ago to $309,700, the lowest since February 2017, and a price that was first reached in November 2015. Granted, this data is whiplash-volatile, but after a while the trend becomes clear: 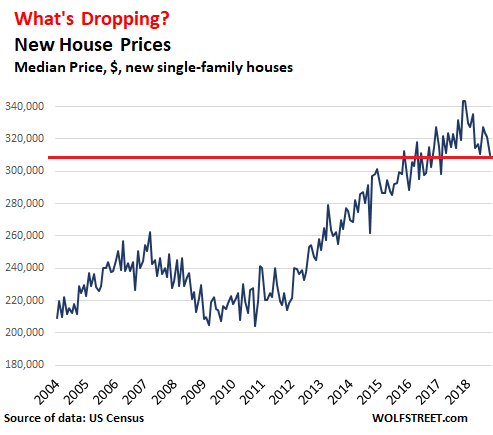 Trouble in the land of new houses hasn’t been exactly a secret. Since January this year, the stocks of home builders have gotten beaten up, after a phenomenal post-election rally that had kicked off in November 2016.

Since January 22, the iShares US Home Construction ETF [ITB] — top holdings are the homebuilders Lennar, D.R. Horton, NVR, PulteGroup, and Toll Brothers — has plunged 29% despite the blistering 2.7% bounce today: 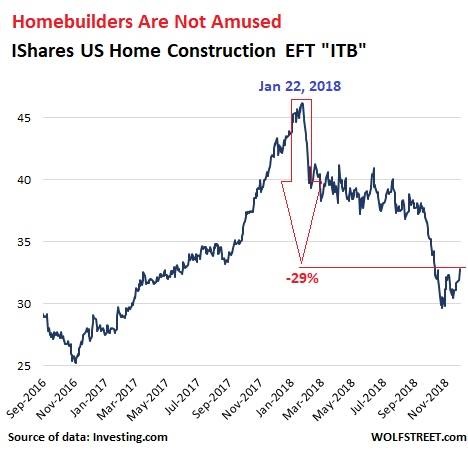 Homebuilders are the pros in the housing market. They have the data, they know what’s going on in the market. And the market is where the buyers are, and the buyers have lowered their aspirations as their home-purchasing power is being whittled down by rising mortgage rates.

To make sales happen, homebuilders’ first reaction is to throw incentives at potential buyers to get them to sign the deal, such as an upgrade to granite counter tops. But those incentives are hard to capture in overall pricing data. And that’s precisely why incentives are being lavished on buyers up front, rather than price cuts.

If incentives are not enough to move those houses, prices come down. And that has been happening. These lower prices of new houses are pressuring prices of existing homes further. That’s what happened last time. And now it’s starting to happen again.