Reading the purposefully repetitive and strategically mind-numbing minutes of the FOMC meetings, such as the minutes that the Fed released today, can be a brutal affair. But it’s where the Fed discusses the economy and vaguely hints at risks balling up in it. It sprinkles in clues about its decisions on interest rate hikes. So these minutes are a link in understanding where interest-rate policy might go in the future, and they’re designed to communicate precisely that.

To allow everyone to dodge the torture of having to sort through it all manually, I have designed a nifty Fed Hawkometer – pronounced haw-KO-meter. It’s untested, and results may vary, as they say. If it appears slightly tongue-in-cheek, that’s OK. It measures how many times the minutes use the word “strong,” “strongly,” and “stronger” to describe the economy: 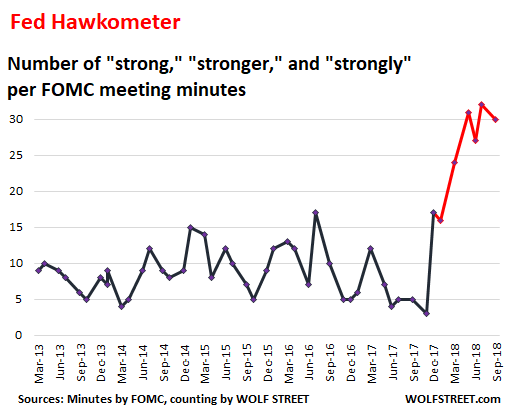 The average frequency of “strong,” “strongly,” and “stronger” between January 2013 and December 2017 was 8.7 times per meeting minutes. In the minutes released Wednesday afternoon of the Fed’s meeting on September 25-26, it was 30 times. The average over the past four meeting minutes (May, June, August, September) was also 30 times. That’s an increase of 240% from average!

And the frequency in today’s minutes shot up 500% year-over-year. In other words, the Fed Hawkometer is now redlining.

Here’s a sample of those 30 occurrences in the minutes, released Wednesday afternoon, of the Fed’s meeting on September 25-26 (bold added):

In my Fed Hawkometer above, you can see that the post-crisis economy was running along recovering, and things were “strong” in some areas and still waiting for inspiration in others, but starting in December 2017, the mentions of “strong” started piling up massively.

This is an indication of how the Fed – given the data it looks at and what its contacts in the business community are saying – thinks about the economy and where it is going, and by extension, where monetary policy should go.

There were a few tidbits in the minutes that gave a clue as to what is on the Fed’s worry list, including risks to financial stability due to inflated assets prices that are used as collateral. The reference this time was to one of our favorite topics, “leveraged loans,” an asset class the Fed and other bank regulators have been warning about for four years:

Some participants commented about the continued growth in leveraged loans, the loosening of terms and standards on these loans, or the growth of this activity in the nonbank sector as reasons to remain mindful of vulnerabilities and possible risks to financial stability.

And relatively new references started to crop up in larger numbers, namely to the “stimulative” effects of fiscal policy, including:

In the prior minutes from the August meeting, “stimulus” or “stimulative” appeared just once, in the phrase, “stimulative federal tax and spending policies.” So clearly, these stimulative effects of what I have come to call a stupendous spending binge and big-fat tax cuts are keeping the Fed Hawkometer at the redline.

As a flood of US debt washes over the globe, someone is buying these Treasury securities. Here’s who. Read…  Who Bought the $1.6 Trillion of New US National Debt Over the Past 12 Months?

62 comments for “My Proprietary Fed “Hawkometer” is Redlining”