This deal is “reminiscent of the kind of deal I would have seen in 2006 and 2007.” They’re still blowing off the Fed.

This is considered a door-opener Leveraged Buyout (LBO): If it flies and investors buy this $13.5 billion pile of deeply junk-rated debt today, even riskier and bigger LBOs may fly.

It’s the fourth largest LBO since the Financial Crisis and the ninth largest of all times in the US and Europe: Thomson Reuters Corporation is separating its largest division, the financial information, analysis, and risk businesses, now called “Refinitiv,” to sell a 55% stake to a group of investors led by private equity firm Blackstone Group.

This being a “leveraged” buyout, the Blackstone consortium is making the target company, Refinitiv, borrow in total $13.5 billion to fund most of its own buyout. This consist of $9.25 billion in “leveraged loans” and $4.25 billion in secured and unsecured bonds. Some pieces are denominated in dollars, others in euros. This debt sale is being completed today.

The Blackstone Consortium will infuse $3.025 billion in cash equity. Thomson Reuters will retain a 45% stake and will receive a special dividend from Refinitiv of approximately $17 billion, according to Moody’s. And there are some other details involved.

Moody’s also rates the loans and bonds being sold today, ranging from B2 to Caa2 for some unsecured bonds, which is eight notches into junk, and just three notches above default, considered “extremely speculative” (here’s my cheat sheet for corporate credit ratings categories).

Seeing strong demand for this debt, Refinitiv on Monday increased the size of the debt sale by $1.25 billion and lowered the proposed yields on all but one piece. For investors, this means even more risks (more debt piled on the company) at even lower yields for investors. But hey, these are the good times.

This deal is “reminiscent of the kind of deal I would have seen in 2006 and 2007,” Scott Roberts, head of high-yield investments at Invesco, told the Wall Street Journal. In addition to the large amount of debt being issued, “you have a covenant package that’s extremely weak.”

OK, but weak covenants have become a pandemic. Companies issuing leveraged loans love weak covenants, and creditors will rue the day, but for now everything flies.

The share of these so-called “covenant-lite” (“cov-lite”) loans compared to all leveraged loans outstanding keeps setting new records. LCD of S&P Global Market Intelligence reported today that cov-lite loans in August accounted for 78.6% of outstanding leveraged loans, and up from 55% in mid-2014: 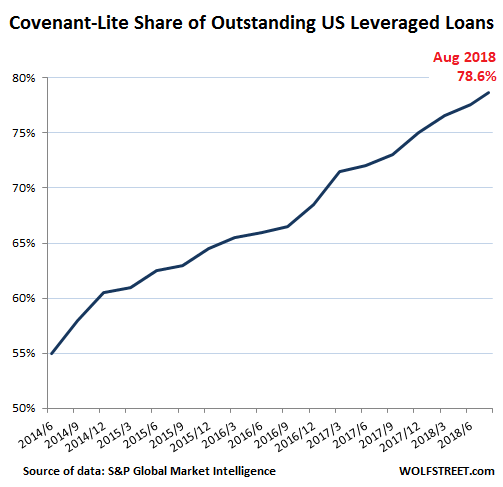 Cov-lite loans give weaker protection to creditors (the investors), and in case of default, will hinder recovery and increase the losses. In Refinitiv’s debt package, $9.25 billion are leverage loans.

In addition, on the bond-side of the package, Refinitiv would be able to pay special dividends to its owners even if it came under severe financial distress, according to The Journal, “a provision that the research firm Covenant Review described as ‘wildly off market.’”

But investors are going for it. It’s party time.

Moody’s says the low credit rating of B3 reflects Refinitiv’s:

The pro-forma total debt-to-EBITDA ratio (a debt-to-cash-flow measure, where cash flow = earnings before interest, taxes, depreciation, and amortization) will come in at about 7.6x, according to Moody’s.

Debt being 7.6 times the size of annual cash flow is high – and very risky for lenders. In 2013, US bank regulators, including the Fed and the OCC, started to crack down on banks about underwriting leveraged loans for deals whose debt amounted to more than 6 times EBITDA. This was a lesson learned from the Financial Crisis when banks got stuck with these leveraged loans and weren’t able to unload them to investors, as they usually do. But under the new pro-banking regime, regulators have backed off, and the 6x has been relegated to a nonbinding guideline to be ignored at will.

And the company’s “EBITDA margins are below peers, suggesting the absence of pricing power and limited ability to achieve meaningful share gains,” Moody’s says.

But none of these fundamentals matter to investors. These institutional investors – such as pension funds, insurance companies, loan funds, etc. – are eager to buy this debt to get some extra yield, no matter what the risks or consequences, because the party must go on.

And this type of investor behavior only encourages the Fed to continue to raise rates until financial conditions in the market tighten enough to let the hot air out of these kinds of exuberantly risky deals.

The soothingly low mortgage delinquency rate is a deceptive indicator: the New York Fed weighs in. Read…  What Can Cause the Next Mortgage Crisis in the US?

42 comments for “Just How Wildly Exuberant is the Junk-Credit Market?”