The soothingly low mortgage delinquency rate is a deceptive indicator: the New York Fed weighs in.

Mortgage delinquencies at all commercial banks in the US inched down to 3.14% in the second quarter, the lowest since Q2 2007, according to the Federal Reserve. But after those soothingly low delinquency rates in 2007, something happened. By Q3 2008, the delinquency rate hit 5.2%, and in Q4 2009, it went over 10%, and stayed in the double-digits until Q1 2013. This was the mortgage crisis. And we’re a million miles away from it, thank God. Or are we? 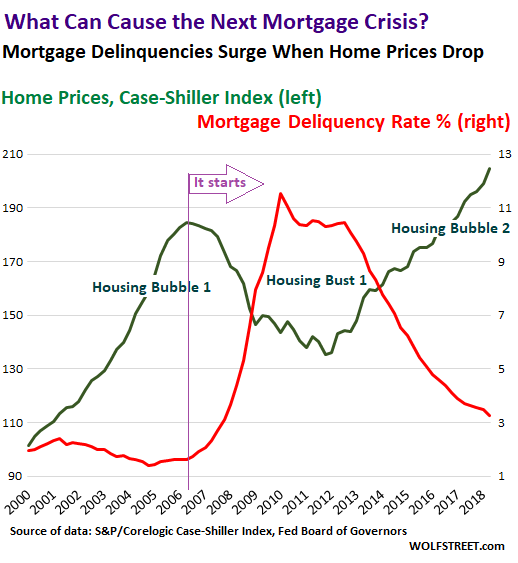 In a rising housing market, they would just sell the home and pay off the mortgage. But they couldn’t sell their home because it was worth less than the mortgage, and default was the only option.

Over the first half of the 2000s, U.S. household debt, particularly mortgage debt, rose rapidly along with house prices, leaving consumers very vulnerable to house price declines. Indeed, as house prices fell nationwide from 2007 to 2010 and unemployment rates soared, mortgage defaults and foreclosures skyrocketed because many households were “underwater”…

But the national averages don’t do a good job. About a third of homeowners own their homes free and clear, and there is no risk associated with them. Another third of homeowners owe relatively small amounts or very manageable amounts on their homes, after years of having made payments without cash-out refinancing. And they’re not a risk factor either. They can always sell their home and pay off their mortgage, even if home prices drop 40%.

The risk lies at the remaining third of the homeowners, the most vulnerable, the most leveraged, those that bought recently at the highest prices, those that refinanced to cash out their home equity….

Then there’s the issue of home prices dropping a lot more in some regions – and this is averaged out in the national statistics. The New York Fed (emphasis added):

At a more disaggregated level, the time series of our leverage metrics clearly reflect the dramatic regional home price dynamics that others have observed, with the widest swings in prices found in the “sand states”: Arizona, California, Florida, and Nevada. Studying these states illustrates one of the key lessons from our analysis: Looking at measures of leverage based on contemporaneous housing values will often lead one to misestimate the vulnerability of a housing market to shocks.

Homeowners in the sand states were much less levered in 2005 than those in other regions, yet as home prices reverted to their mean, the leverage of these homeowners rapidly increased and extremely high mortgage defaults followed.

The paper warns: “Most importantly, higher leverage, and in particular a household being underwater on its mortgage(s), is a strong predictor of mortgage default and foreclosure.”

In fact, according to research cited by the paper, negative equity is a “necessary condition” for mortgage default:

Even if they don’t default, households that have become overleveraged due to declining home prices impact the broader economy, the New York Fed points out:

And the differences, as real estate in general, are local, according to the report: “In cities where more homeowners are highly leveraged, house prices are more sensitive to shocks (such as city-specific income shocks).”

It all boils down to this: There can be no mortgage crisis unless home prices decline enough in some markets. And given how inflated home prices are in many markets, and that mortgage rates are now climbing, any reversion toward the mean of home prices in those markets would cause the delinquency rate to do a beautiful “déjà-vu all over again,” so to speak. That low national delinquency rate these days, often touted as a sign of low risk in the housing market, has zero meaning as an indicator of risk for the most vulnerable households when the prices of their homes begin to drop.

Refinancing activity plunges to the lowest level since 2000. Read…  What Will These Mortgage Rates Do to Homeowners Trying to Refinance, Homebuyers, and Mortgage Lenders?

96 comments for “What Can Cause the Next Mortgage Crisis in the US?”