And why was coal left behind?

By Leonard S. Hyman and William I. Tilles, Oilprice.com:

Sales of electricity in the U.S. have barely increased despite nine straight years of economic growth. It almost looks as if the conservation ethos for American consumers has finally taken hold. That restraint also applies to large commercial and industrial customers as well. And foreign consumers seemed even less interested in plugging in. A discouraging drip, drip of bad news for the electricity industry.

Well, something happened. For the eight months ended August, electric consumption in the U.S. actually rose 3.3% compared to last year. In other industries that’s not a high growth number, but for electric utilities with virtually 100% market penetration it constitutes unusually high levels of sales growth. Electric industry participants in recent years have gotten used to 0% as a normal “growth” rate: 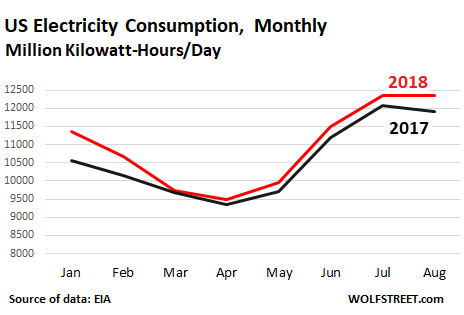 The first part of the year featured unusually cold weather and then a hotter-than-usual early summer. Residential customer load is more sensitive to weather. Individuals and families often adjust their A/C on and off all summer depending on the weather. Heating and cooling accounts of 22% of residential electric sales.

Temperature departures from the heating and cooling norm make a big difference for residential KWH sales. Thus, it looks as if the recent sales surge is weather-induced. Consumer attitudes towards electricity usage were not likely altered. But electric utility customers did respond to temperature extremes in their respective locales in the way we would expect.

How did the electric industry produce that extra electricity sold in the first eight months of 2018? Here is how the production by fuel changed: the industry burned more natural gas, used more solar and wind, used less hydro-power, and burned less coal. That is not an auspicious omen for the Trump administration’s plans to revive coal. It seems that the electricity industry is acclimatizing itself to a low or no coal future, despite the stated intentions of the Trump administration. 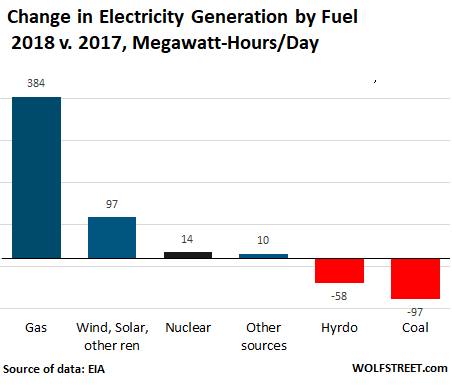 The eight months results probably do not portend an upturn in electricity sales due to a change in consumer attitudes with respect to the efficient usage of electricity. But these strong sales results may say something about escalating future power generation requirements due in part to climate variation itself.

Climate change is a topic the once coal dependent electric utility industry has preferred to ignore. But now the industry overall benefits economically with the more rapid decline of coal and increased reliance on natural gas. It seems like an ideal time for industry rebranding. It is not unreasonable to think the local electric utility could one day appeal to consumers as the carbon-free, home-climate-comfort provider operating on both sides of the meter.

No one today, for good reason, thinks of electric utilities as a growth industry though occasional weather extremes, both hot and cold, may propel near term kwh hour sales growth. But the electrification of our transportation system — that’s the game changer for utilities. By Leonard S. Hyman and William I. Tilles, Oilprice.com

This time was supposed to be different. Read… Shale Profits Remain Elusive

54 comments for “Why Have US Electricity Sales Surged in 2018, after Stagnating for Years?”