Cash extraction at the peak of a long housing bubble, via multiple mortgages on the same property: Does that ring a bell?

Canadian real estate price spiked in 2017, and a lot of homeowners have already spent that equity. Canada Housing and Mortgage Corporation (CMHC) numbers show a huge number of people are taking out multiple mortgages on their homes. The trend now represents over 1 in 10 mortgages issued in the country, and nearly half are in just 3 cities.

The term “multiple mortgage holder” can have a lot of meanings, so let’s just run over the CMHC definition. These are mortgage holders that took out a new mortgage on a home with at least one existing mortgage. These numbers from the CMHC only include loans that result in a balance increase of more than 10%. The total number is likely higher, but even excluding smaller loans we get some giant numbers.

Canadians taking out multiple mortgages on the same house made a huge jump. There were 145,013 new loans issued on already mortgaged homes in 2017, a 4.16% increase from the year before. That represents 15.12% of originations that year, or over 1 in 10 mortgages across the country. That’s a lot of people in a rush to use their home equity all of a sudden. 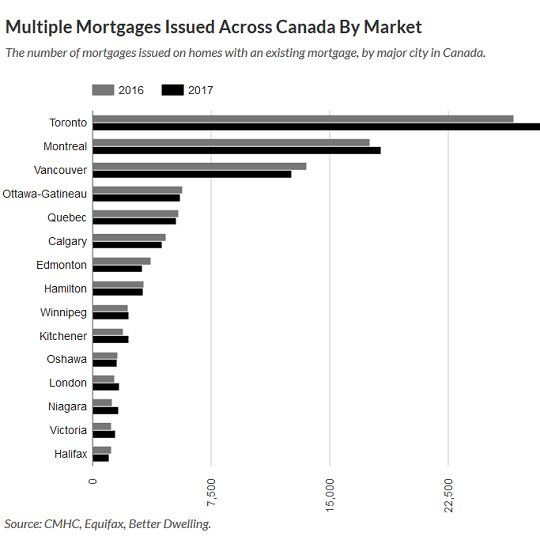 Toronto real estate is the number one spot in Canada for multiple mortgages on a single property. There were 28,364 new loans issued on already mortgaged properties in 2017, up 6.4% from the year before. This represents 17.4% of all originations in the city, a 2.6% increase of market share from the year before that. The volume and market share of multiple mortgages is on the rise in Toronto.

Vancouver is home to the third largest market of multiple mortgages. There were 12,597 new loans issued on already mortgaged properties in 2017, down 7% from the year before. This represents 18.1% of mortgages in the city, a 2.2% increase in market share from the year before. The volume of multiple mortgages is on the decline, but the share of total originations is on the rise.

Debt by itself isn’t a problem, but the current setup makes it an interesting one. A significant number of these loans are in markets that recent price acceleration. In the event of a correction, these borrowers will be with less cash than they expected. This becomes more complicated with rising rates, increasing the cost of servicing these (variable-rate) loans. By Daniel Wong, Better Dwelling

A massive survey of recent homebuyers in Canada reveals all. Read…  Foreign Buyers Made Me Do It: Canada Reflects Back on its Housing Bubble

52 comments for “Just in Time: Use of Home as ATM Surges in Canada”