Is investor appetite for risky debt drying up? Have investors given up chasing yield? On the contrary! They’re chasing harder than before, but they’re chasing elsewhere in the junk-rated credit spectrum: leveraged loans.

Leveraged loans are another way by which junk-rated companies can raise money. These loans are arranged by banks and sold either as loans or as Collateralized Loan Obligation (CLOs) to other investors, such as pension funds or loan funds. They’re a $1 trillion market and trade like securities. But the SEC, which regulates securities, considers them loans and doesn’t regulate them. No one regulates them.

This is well over triple the amount of junk bonds issued in same period ($110 billion).

Many of these loans have floating interest rates, typically pegged to the dollar-Libor. And in an investment environment where the Fed has been trying to push up interest rates, Libor has surged, and floating-rate loans, whose interest payments increase as Libor ratchets higher, are very appealing to investors – despite the additional risks these higher interest payments pose for the companies that are already struggling with negative cash flows. LCD:

The U.S. leveraged loan market, which is accessed by speculative grade debt issuers, has been exceedingly hot over the past two years or so as investors pour money into the asset class in anticipation of rate hikes by the Fed. Such moves usually boost interest in floating rate asset classes.

Given the “sustained investor appetite” for this type of debt, companies have been able to issue these loans with lower spreads over Libor, making it cheaper for companies to borrow – until rates rise further. That’s when this debt gets more expensive for these companies that already have a high debt load, often combined with money-losing operations – the combination that gives them a non-investment grade or “junk” credit rating (my cheat-sheet on credit rating scales).

Leveraged loans come with covenants that are supposed to protect investors during the term of the loan and in case of default. With strong covenants and good collateral, leveraged loans tend to be less risky than junk bonds issued by the same company.

Alas, investors have the hots for this debt, and companies are taking advantage of it by weakening covenants, giving investors fewer protections and the company more leeway – such as paying interest with more debt rather than cash if it runs out of cash (payment-in-kind or PIK); normally, not being able to pay interest would constitute a default, but not with these “covenant lite” or “cov-lite” loans. The boom in cov-lite has started years ago and has surged to massive record proportions. When these loans default, investors are exposed to much greater losses. 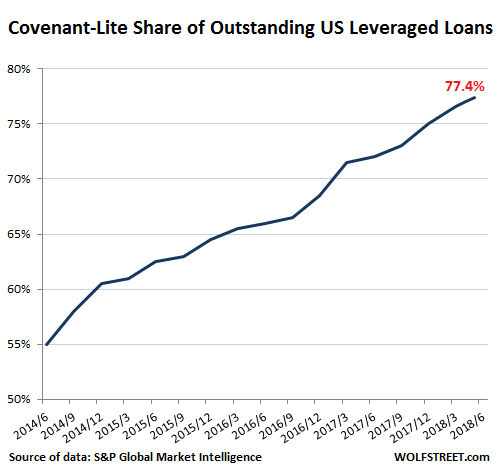 This is one of the many distortions of years of easy-money policies around the globe.

“The rapid growth of cov-lite has raised eyebrows, to say the least, as the current borrower-friendly credit cycle enters its tenth year (that’s a long time between spikes in defaults),” LCD noted in June. And it’s even more eyebrow-raising:

But it’s not just the sheer volume of cov-lite outstandings that are important. LCD recently looked at the debt cushion of outstanding loans – the amount of debt in a borrower’s capital structure that is subordinated to the senior loan – and found that, increasingly, today’s cov-lite deals have little or no debt cushion beneath them. This is important because, as LCD research has shown, the lack of a debt cushion significantly lessens what an investor will recover on a loan, if that credit defaults.

How much has this debt cushion eroded? As of May 31, 23% of all cov-lite loans did not have any debt, such as a mezzanine tranche, high yield bond, or other, below the cov-lite facility. That’s an all-time high, and is up from 18% five years ago, and from just 10% at the end of 2007 (shortly before the financial crisis), according to LCD.

So not only is issuance of cov-lite loans booming, and the total amount outstanding of cov-lite loans is setting record after record, but a larger and larger portion of these loans have no debt cushion beneath them, and the risks are higher than ever.

And what is one of the drivers? Mergers & Acquisitions by junk-rated companies. Leveraged loan issuance to fund M&A deals soared to a record of $83.9 billion in the second quarter, accounting for 58% of all issuance, beating the record set in the second quarter of 2007 ($82.9 billion), just before it all came apart. 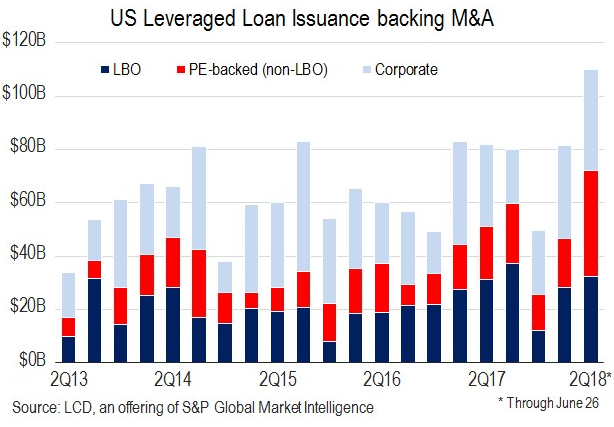 But it gets even better.

In Q2, fired up by this wave of M&A, issuance of leveraged loans with only a second-lien – a riskier type of debt that gets repaid only after first-lien debt has been repaid – surged for the second quarter in a row, and hit $12.2 billion. Second-lien leveraged loans are appealing in good times because their yields are higher than those of first-lien debt. But, according to LCD, “They are one indication of a hot leveraged loan market.”

It’s all flying off the shelf these crazy days. Including at Asurion. Its PE firm owners are extracting $3.75 billion from it to fund a special dividend, one of the largest ever. The package of leveraged loans includes a $1.5-billion second-lien tranche. Read…  This is Proof the Junk-Credit Market is Still Irrationally Exuberant

46 comments for “Leveraged-Loan Risks Are Piling Up”